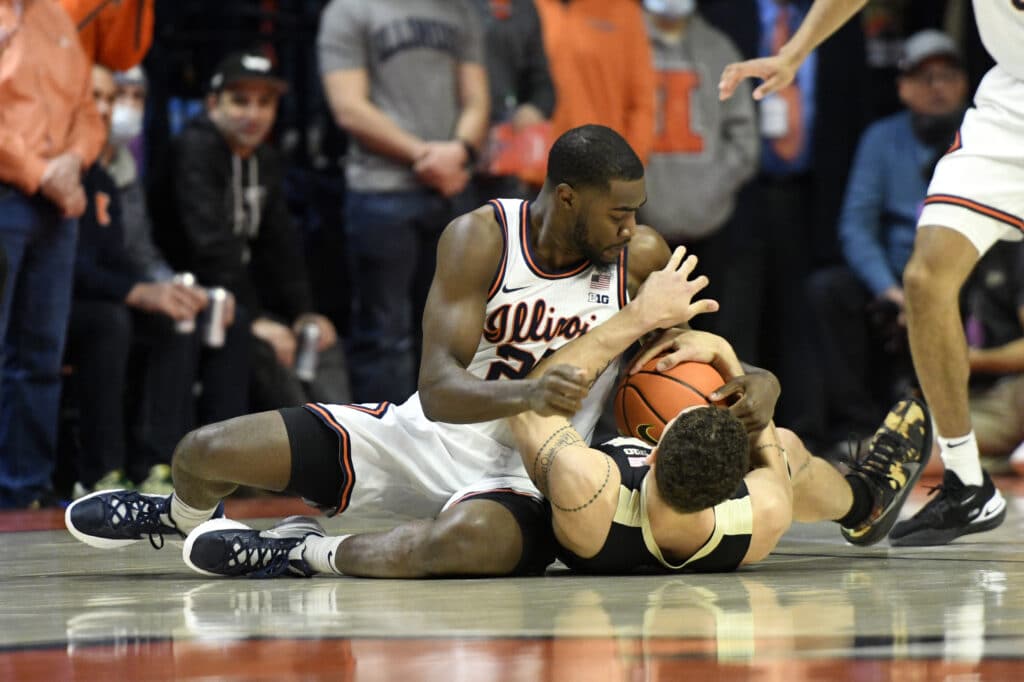 Thanks to Sasha Stefanovic, who scored 22 points, the No. 4 men’s basketball team Purdue beat No. 17 Illinois in double overtime. Boilermakers are 3-1 this season against AP Top 25 opponents, while Illinois is 0-2 against ranked teams. The Associated Press has the story:

CHAMPAIGN, Ill. (AP) — Sasha Stefanovic scored 22 points, including a go-ahead 3 at the start of double overtime that sent No. 4 Purdue over No. 17 Illinois 96-88 on Monday.

Illinois guards Andre Curbelo and Alfonso Plummer made baskets in the final seconds of regulation and the first overtime before the Boilermakers (15-2, 4-2 Big Ten) broke away.

Purdue hit four straight shots to take an 89-83 lead with 1:03 left in double overtime. Eric Hunter Jr. had two of those baskets.

Stefanovic went 5 of 8 on 3-point tries and also had eight rebounds. His last-second shot from long range fell short as the regulation buzzer sounded.

Curbelo, who had missed 11 games after being injured, had 20 points, six rebounds and three assists. His basket with 14 seconds remaining in regulation tied it at 69.

Boilermakers center Zach Edey was effective, especially early on, finishing with 20 points on 9-for-14 shooting to go along with eight rebounds. He also helped limit Kofi Cockburn to 10 points on 3-of-9 shooting in 22 minutes before the Illinois center fouled out early in the first overtime.

Purdue guard Jaden Ivey struggled to hit shots, going 3 of 10, but made 13 of 15 free throws to finish with 19 points and eight rebounds.

Illinois trailed for most of the first overtime period, but Curbelo made a turnaround jumper and Plummer had a layup to force a second overtime.

Edey was a factor early on, scoring 14 points on 6-of-7 shooting in the first half. The Boilermakers took an 11-point lead into the break, but back-to-back 3-pointers from Plummer and Da’Monte Williams helped Illinois close the deficit to 39-34 with 17:43 to play.

Purdue: Boilermakers are 3-1 this season against AP Top 25 opponents, while Illinois is 0-2 against ranked teams. … The Boilermakers have won seven of their last eight games since an upset loss at Rutgers on Dec. 9. … Purdue and Illinois meet again in West Lafayette, Indiana, on Feb. 10.

Illinois: The return of Curbelo was a welcome development after missing the team’s last 11 games. His ability to penetrate and get to the hoop gives Underwood’s offense more dynamism in addition to Cockburn and perimeter shooters such as Plummer and Frazier. The Illini remain in first place in the Big Ten, and there’s another conference contender coming to town next week in Michigan State on Jan. 25.

Purdue: At Indiana on Thursday.

Illinois: At Maryland on Friday.