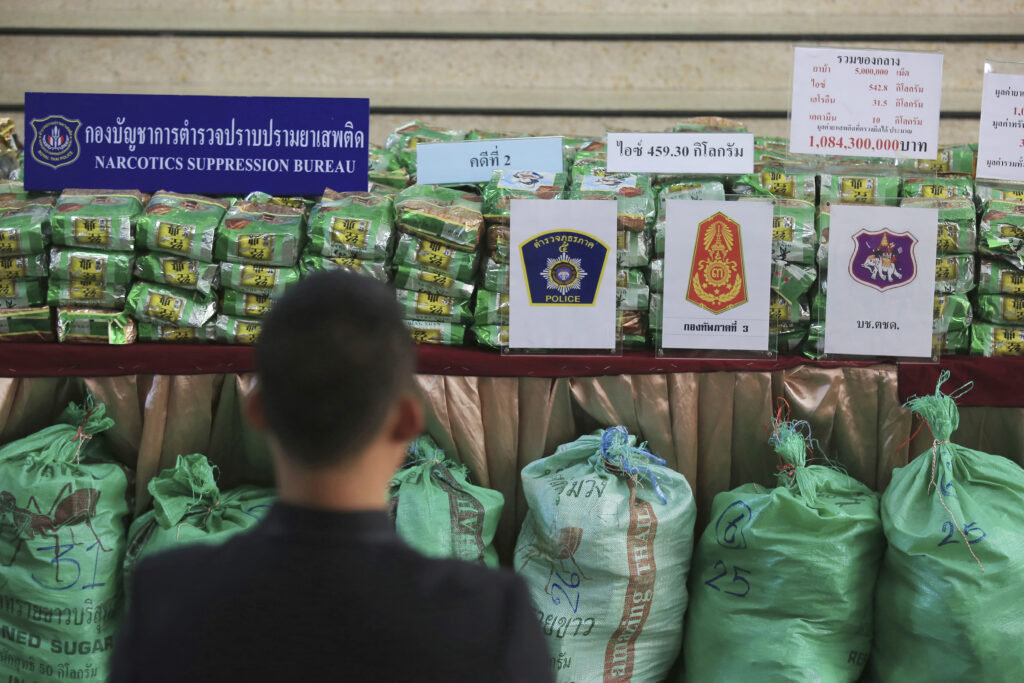 Highlighting the scale of illegal drug production and trafficking in the eastern region of Asia, as over 1 billion pills sized and the challenges of fighting it, are ever prevalent the U.N. said Monday. Production and trafficking of methamphetamine jumped yet again as supply became super concentrated in the Mekong (River region) and in particular Thailand, Laos, and Myanmar. As reported by the AP:

The drugs are largely consumed in Southeast Asia but also exported to New Zealand and Australia, Hong Kong, Korea, and Japan

BANGKOK (AP) — The number of methamphetamine tablets seized in East and Southeast Asia exceeded a billion last year for the first time, highlighting the scale of illegal drug production and trafficking in the region and the challenges of fighting it, the U.N. said Monday.

The 1.008 billion tablets — which would weigh about 91 tons altogether — were part of a regionwide haul of almost 172 tons of methamphetamine in all forms and was seven times higher than the amount seized 10 years earlier, the U.N. Office on Drugs and Crime said in a report.

“I think the region is literally swimming in methamphetamine,” said Jeremy Douglas, Southeast Asia regional representative for the U.N. agency, at a news conference in the Thai capital Bangkok unveiling the report on “Synthetic Drugs in East and Southeast Asia.”

“So, there’s going to have to be a radical policy shift by East Asia to address this problem or it’s just going to continue to grow,” Douglas said.

The drugs are largely consumed in Southeast Asia but also exported to New Zealand and Australia, Hong Kong, Korea, and Japan in East Asia, and increasingly to South Asia.

“Production and trafficking of methamphetamine jumped yet again as supply became super concentrated in the Mekong (River region) and in particular Thailand, Laos and Myanmar,” Douglas told The Associated Press in an email.

The increased production makes the drug cheaper and more accessible, creating greater risk to people and their communities, the report said. According to Douglas, when he first worked in the region in 2002-2007, a meth tablet cost five to six times what it costs now.

Methamphetamine is easy to make and has supplanted opium and its derivative heroin to become the dominant illegal drug in Southeast Asia for both use and export.

The Golden Triangle area, where the borders of Myanmar, Laos and Thailand meet, was historically a major production area for opium and hosted many of the labs that converted it to heroin. Decades of political instability have made Myanmar’s frontier regions largely lawless, to be exploited by drug producers and traffickers.

Douglas said at Monday’s news conference that there is a fundamental need to refocus law enforcement efforts against the drug trade.

“There’s lots and lots of seizures being made and no impact being made on the business itself. Organized crime just keep cranking out the volume, replacing seizures with more product,” Douglas said.

“The chemical situation is highly complex and there’s no essential chemicals being seized and they just continue to flow unabated, primarily through Laos into (Myanmar’s) Shan State,” Douglas added. “We also have huge money laundering operations at play in the region. We have no attempt fundamentally at the end of the day to address demand which is seemingly growing and can continue to grow because of the price point of the drug is so cheap.”

Given the problem of limited governance and low attention to the issue, the UN. agency said organized crime syndicates have the means to continue to produce more meth and to sell it to a growing population of young people with increased spending power.

The political landscape has also served to ramp up production.

In Myanmar, the military seized power from an elected government last year and is now engaged in an armed struggle against foes of military rule.

Drug production in Myanmar is often associated with armed ethnic minority groups that sometimes battle the government and each other.

“Every group denies involvement in drug production and trafficking and point at other groups as responsible, but the drug economy is arguably the largest part of the economy in most or many parts of Shan and border areas of Myanmar and there is plenty of intel connecting groups to labs and shipments,” Douglas said.

The report also called Laos one of the countries most impacted by methamphetamine trafficked out of Myanmar. One of Asia’s biggest-ever drug busts was made in Laos last October, with police there seizing more than 55.6 million methamphetamine pills in a single raid. They also seized about 1,500 kilograms (3,300 pounds) of crystal methamphetamine, state media reported.

The U.N. agency said it was concerned that criminal enterprises were targeting Cambodia as a drug production site. One covert laboratory dismantled there last year was an industrial-scale facility set up to produce ketamine and potentially other drugs, the report said.

Ketamine is used legitimately as an anesthetic, but its non-medical use and clandestine manufacture was concerning to the U.N. agency.

Many nations tried to halt meth production by choking supplies of precursors, usually ephedrine and pseudoephedrine, best known for being used in decongestant medicines. But the U.N. agency said some methamphetamine producers have clearly learned to make these precursors from non-controlled substances that can be freely and legally traded.