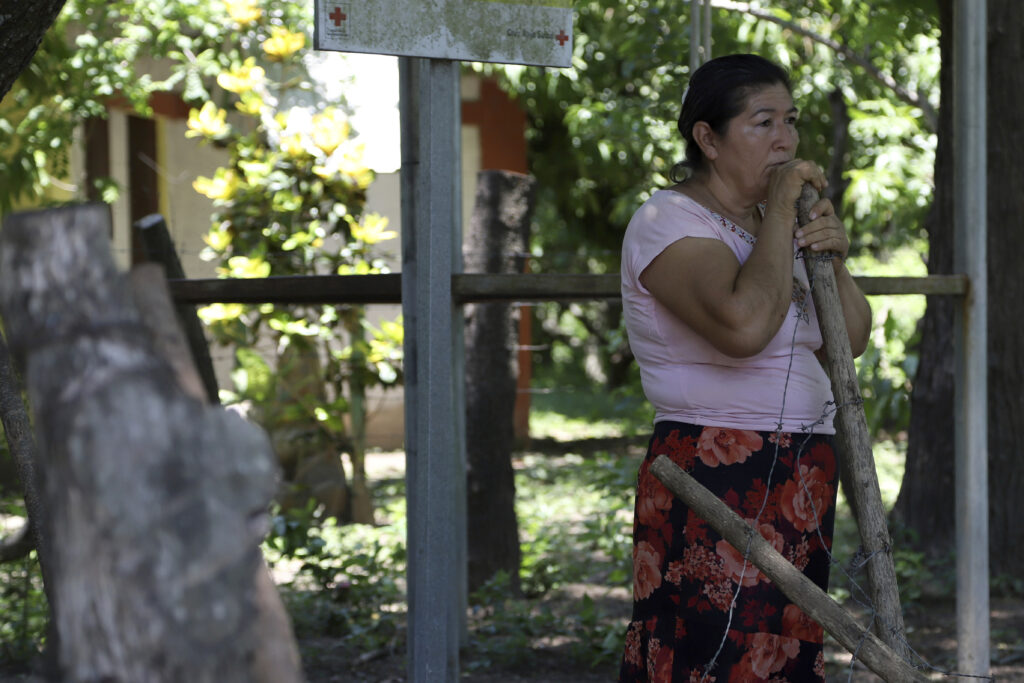 The congress in El Salvador granted President Nayib Bukele the authority to suspend civil liberties in order to go after powerful street gangs, resulting in the arrest of over 36,000 people in the 10 weeks since then. However, human rights groups allege that many of the arrests appear arbitrary or unjustified. The Associated Press has the story:

LA LIMONERA, El Salvador (AP) — Esmeralda Domínguez was about 100 yards from home when soldiers and police blocked her on a small bridge. The authorities had waited there for hours. Dominguez, neighbors said, was the only person they stopped.
Her aunt, who lived nearby, protested. Dominguez was no criminal, she insisted, rattling off the community organizations her niece led or was involved in. It didn’t matter.
“We know what we’re doing,” a soldier told the aunt before loading the young woman into a truck. It rumbled off, leaving her black motorcycle beside the road.
That was April 19. No one in her family has seen her since.

Over the past 10 weeks, El Salvador’s security forces have arrested more than 36,000 people since the congress granted President Nayib Bukele the power to suspend some civil liberties to pursue powerful street gangs. Lawmakers extended those powers by another 30 days last week as public opinion polls showed broad popular support.
However, a growing number of the arrests — like Dominguez’s — appear arbitrary or unjustified, human rights groups allege.
Cristosal, a nongovernmental organization, has documented more than 500 cases of arbitrary arrests since the state of exception was imposed March 27, according to its director Noah Bullock. Amnesty International said Thursday that its investigators found that thousands of people had been arrested without legal requirements being met.
Bukele sought the expanded powers after El Salvador’s street gangs killed dozens of people in late March. Two weeks into the mass detentions, the president acknowledged that there could be an “error” of 1% of those arrested not having any ties to the gangs. Even that seemingly small number suggests authorities are not making arrests based on investigations, critics say. His office declined to comment.

Now, under the new powers, authorities do not have to give a reason to those being arrested. Detainees can be held 15 days without seeing a judge and without access to lawyers.
When those arrested do finally get a lawyer, the public defender’s office is overwhelmed. Tens of thousands of new cases have piled atop the existing caseloads of only about 250 public defenders nationwide.
Domínguez’s family and some 50 others in the area appear to be among the first to organize in an effort to free their relatives. The families have made filings with the courts known as habeas corpus, which order that someone in custody be brought before a court and places the burden of proof on the government. Cristosal has been helping with many of those cases, including Domínguez’s.
The most common crime attributed to those arrested, including Domínguez, is illegal association for allegedly belonging to a gang. Judges have been practically automatic in ordering arrestees held for six months at the request of prosecutors despite little or no supporting evidence, according to a Cristosal report. Judges have ordered nearly 26,000 people held in jail, prosecutors say.
In April, a police union said that some commanders under pressure to meet arrest quotas were pushing their officers to do anything necessary to make arrests, including giving false statements tying people to gangs. And last month, three police agents were arrested when they went to collect money they had demanded in exchange for not arresting someone.
Just hours before Domínguez was detained, Bukele wrote on Twitter — above photos of shirtless gang members with faces and torsos blanketed in tattoos — that authorities had arrested more than 13,000 “terrorists.” Those following the president’s social media feed would not imagine Domínguez — a mother of two, including a 4-month-old daughter — would soon figure in the soaring arrest tally.
José Lazo Romero, a lawyer with the Brother Mercedes Ruíz Foundation, a Christian social justice organization with which Dominguez worked, said he knew of at least 15 cases similar to hers in the area, including three young men arrested on their way home after playing soccer and a disabled person taken away by authorities.
“It’s said that he who has nothing to hide has nothing to fear,” Lazo said. “Now people who precisely have nothing to hide fear being arrested, fear being taken to jail, being sent to prison.”

The region is known as Bajo Lempa, the alluvial plains southeast of the capital near where the Lempa river empties into the Pacific Ocean. These lowlands flood almost annually when the Lempa overflows and spills across agrarian communities like the one where Domínguez grew up.
Many of the people here have fled conflict before during the civil war in the 1980s — to Panama, to Nicaragua, to other parts of El Salvador. After the 1992 peace accord, many sympathizers of the leftist Farabundo Martí National Liberation Front, or FMLN, were resettled here. María Dolores García, Domínguez’s 55-year-old mother and an FMLN supporter to this day, was one of them.
García was a childhood survivor of the Quesera Massacre. In October 1981, El Salvador’s military forces, including an elite unit trained by the United States, swept through communities in the area. Several hundred people, many women and children, were killed.
“I experienced all of the suffering of the war,” she said, adding: “Today again to be persecuted, it’s not easy.”
Advocates say the vast majority of those arrested come from poor, marginalized communities. The pain is doubly felt by their families, because those arrested were often the breadwinners.
Domínguez was not the first member of her household arrested. Sergio Santos, a farm laborer, her longtime partner and the father of her 4-month-old daughter, was arrested April 9 by police who came to the family’s home and asked García how many men and women lived there. They told her to wake Santos. She said they had a list of names, looked at his ID, said, “’that’s you,’ and handcuffed him.”
Domínguez began daily rounds to the police, to the jail, trying to get information. She was well known in the community and had worked alongside officers at the local police station on a youth program to prevent violence. Her mother said her work hadn’t put her in contact with gang members.
The day she ran into the police, Domínguez had tried to deliver food to Santos and found he’d been transferred to a prison in the capital. Then she, too, was gone.

Years ago, the gangs were present here. They recruited the children and grandchildren of former guerrilla fighters.
“Against your will you had to coexist with them here,” said Ricardo Hernández, a 68-year-old neighbor of Domínguez and her family. “They asked for water, you had to give it to them. They asked for anything, you had to give it to them. Even food and money.”
That changed when the government installed two police stations in the area several years ago. The gangs moved into the mangrove swamps closer to the coast, and the police became — and remain — more visible. Now there are no signs of gang graffiti.
With the congress extending the state of exception for another month, more questions have arisen about what led to March’s surge in killings.
Last month, the investigative news site El Faro published phone conversations apparently between gang leaders and a member of Bukele’s government. The recordings indicated the killings — 62 in one day — came in response to the breakdown of a secret deal with the government. Last year, the U.S. Treasury sanctioned two officials, including the one captured in the recordings, saying Bukele’s administration had bought the gangs’ support with privileges for their imprisoned leaders.
Bukele has previously denied negotiating with the gangs, but his only public response to the latest evidence implicating his administration has been a laugh-until-you-cry emoji on Twitter.
Security Minister Gustavo Villatoro said, requesting the extension, that the government wants to eradicate the gangs. “This war,” he said, “is going to continue for as long as necessary and to the extent that the public continues to demand it.”

On a recent morning, García pulled a sheaf of stamped, signed letters from a plastic bag. All of them attest to Dominguez’s community activism — from organizations she’d led or worked for, organizations that advocated for women, promoted community development and pushed for chemical-free farming.
In a court hearing on May 2, where dozens of detainees were arraigned en masse. The judge ordered Domínguez to six more months of pre-trial detention. Garcia had given the letters to a public defender, but the judge never saw them.
In the arraignments that Cristosal has witnessed, judges face anywhere from 50 to more than 500 detainees at once. The judges are also, generally, not admitting documents like those García collected that speak to the character of those facing charges.
“The evidence being brought against these people are what we would describe as general statistics, not necessarily any information that links individuals to criminal activity,” said Bullock, Cristosal’s director.
In another case, a woman arrested in 2019 on an illegal association charge after a gang member mentioned her name in a tapped phone conversation was arrested again under the state of exception. Cristosal, which is helping her, contends that she was arrested and charged for a second time for the same circumstances in her 2019 case. Her family said there was no evidence of wrongdoing.
Other stories have emerged of people who just completed or nearly completed a prison sentence being picked up again on the same charges. Such arrests suggest that the government is using lists of people who have had contact with the criminal justice system, even if absolved, in making detentions.
In La Limonera, about 200 yards from the family’s home, across a clearing, Domínguez farmed a plot to help feed the household. On a recent day, weeds were crowding out the neat rows of tomatoes and pineapples.
García says suddenly finding herself the primary caretaker for two children, including an infant who had been breastfeeding, turned her life upside down. Domínguez and her partner are in jail, as is the father of Domínguez’s 12-year-old daughter, who had been lending some financial support.
García has relied on donations to keep the children fed. She frets about the plants dying in her daughter’s unattended garden. “It has impacted everyone here in the community because everyone knows her,” García said. “She was the head of the family.”
And what will become of people like Dominguez? Under the current rules, there’s no way to know. Said Bullock: “There is a very uncertain future for people who are in this black hole of a justice system.”