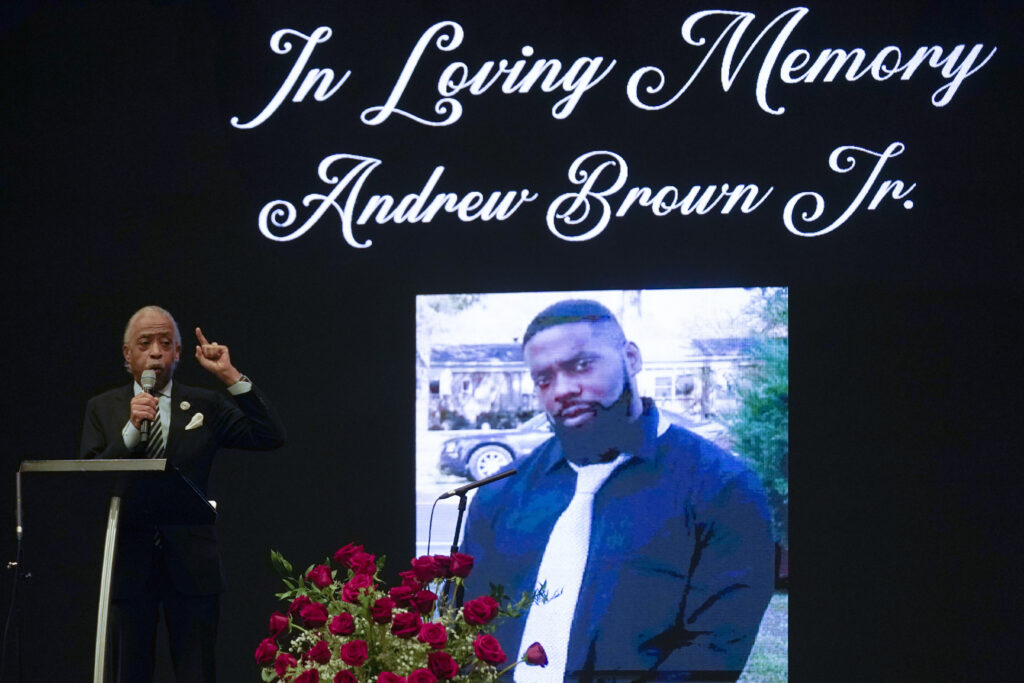 The family of Andrew Brown Jr. will get $3 million in a settlement over his death from sheriff’s deputies who shot him when he was sitting in his car unarmed. They were serving drug-related warrants at his home, when he backed his car up then moved forward, prompting them to shoot. The Associated Press has the story:

(AP) A North Carolina sheriff’s office announced a $3 million settlement on Monday in a lawsuit filed by the family of an unarmed Black man who was shot and killed in his car by sheriff’s deputies more than a year ago.

The family of Andrew Brown Jr. had filed a $30 million civil rights lawsuit in 2021, saying the man died because officers showed “intentional and reckless disregard of his life.”

Brown was killed on April 21 of last year by Pasquotank County sheriff’s deputies while they were serving drug-related warrants at his Elizabeth City home. Several deputies surrounded Brown in his BMW before his car backed up and moved forward. They fired several shots at and into his vehicle. He was killed by a bullet to the back of his head.

District Attorney Andrew Womble had said at a news conference last year that Brown used his car as a “deadly weapon,” causing deputies to believe it was necessary to use deadly force. But lawyers for the Brown family said the shooting was unjustified because Brown was trying to drive away — not toward the deputies and that he posed no threat. After viewing body camera footage of the shooting, they said Brown was sitting in his stationary car with his hands on the wheel when the first of numerous shots was fired.

The settlement was approved by the Pasquotank County Board of Commissioners. It includes a special $1 million appropriation to go along with $2 million from the county’s insurance policy, which was supplied by the North Carolina Counties Liabilities Pool, according to a statement from the sheriff’s office provided to The Associated Press. That amount is at the limit of the policy.

The settlement was reached over several weeks last month in the case overseen by a federal magistrate in U.S. District Court in Raleigh, the news release said.

The county’s payment resolves potential liability against the defendants and any individual officers who were either named or could be named as defendants in the lawsuit, the news release said. The family also entered into a stipulation in which it dismisses all claims against the defendants, namely Pasquotank County Sheriff Tommy Wooten II and three sheriff’s deputies, as well as other potential claims arising from Brown’s death, the news release said.

Brown’s children will share in the proceeds of the settlement as heirs of his estate, the sheriff’s office said.

“Andrew Brown Jr. was a devoted father who wanted his children to have the things he didn’t,” said a statement from the five attorneys representing his family. “While no settlement could ever fill the hole his death left in their hearts, this agreement is about providing for those children’s futures, securing their education and ensuring their dreams didn’t die with their father.”

At the time, the lawsuit filed by the Brown family was the latest in a string of federal civil rights lawsuits following high-profile police shootings of Black and brown people. Many ended in settlements that often included money but specified no admission of guilt. Some of the lawsuits end up in court where a jury can award massive settlements that are reduced on appeal.

An independent autopsy commissioned by the family said Brown was shot five times, including once in the back of the head. Family members who were privately shown a portion of the body camera video afterward said Brown was trying to drive away when he was shot. The shooting sparked days of protests in the city in rural northeastern North Carolina.