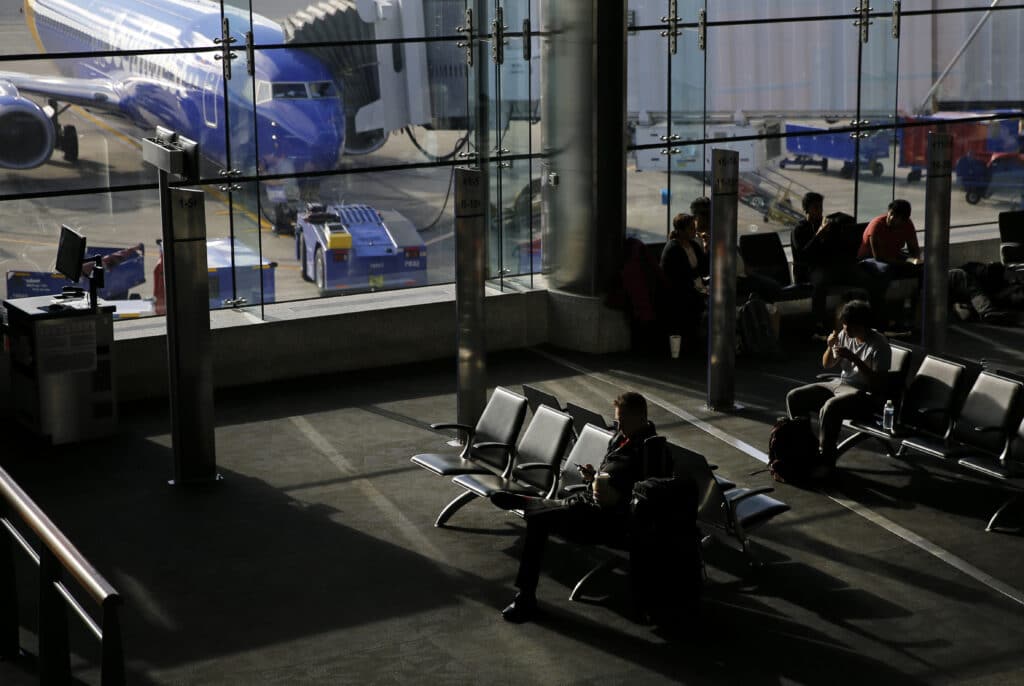 As snowstorms continue around the country, flight cancellations and delays hurt travelers trying to get back to work on Monday. Tuesday looks better, with fewer than 300 flights canceled. The Associated Press has the story:

(AP) A winter storm hitting the mid-Atlantic combined with the pandemic to further frustrate air travelers whose return flights home from the holidays were canceled or delayed in the first few days of the new year.

More than 2,600 U.S. flights and more than 4,100 worldwide were grounded as of midday Monday, according to tracking service FlightAware. Another 8,500 flights were delayed, including 3,100 in the U.S.

First, however, they had to contend with a winter storm was expected to bring as much as 10 inches (25 centimeters) of snow for the District of Columbia, northern Virginia and central Maryland through Monday afternoon.

The cancellations and delays just added to the despair felt over the weekend by holidays travelers trying to get home.

“It was absolute mayhem,” said Natasha Enos, who spent a sleepless Saturday night and Sunday morning at Denver International Airport during what was supposed to be a short layover on a cross-country trip from Washington to San Francisco.

Enos, who was booked on Frontier Airlines, didn’t learn that her connecting flight home to California was canceled until she had already landed in Denver. She rushed to find alternative flights and navigate through a baggage-claim area that was choked with other stranded and confused travelers at the height of new wave of COVID-19 infections.

“It was a lot of people in a very small space and not everybody was masking,” said the 28-year-old financial analyst. “There were a lot of exhausted kids and some families were so stressed out.”

With the spread of the highly transmissible omicron variant, the seven-day rolling average for daily new cases of COVID-19 in the U.S. has tripled over the past two weeks and topped 400,000 on Sunday, according to figures from Johns Hopkins University.

The toll of grounded flights in the U.S. was in the few hundreds per day the week before Christmas, then soared past 1,000 a day, as airlines blamed crew shortages caused by the virus.

For several days, airlines and their passengers lucked out with mostly favorable weather, but a winter storm that hit the Midwest on Saturday caused cancellations to spike again to new highs.

Over the weekend, about 5,400 U.S. flights were canceled — nearly 12% of all scheduled flights — and more than 9,000 worldwide, according to FlightAware. Many of the cancellations were made hours or even a day in advance. Airline believe they have a better chance to keep lighter schedules on track when there are disruptions such as snow or thunderstorms.

Southwest Airlines had canceled about 575 flights, or 15% of Monday’s schedule, by midday. Spokesman Brad Hawkins said storms over the weekend and on Monday affected operations at some of its biggest airports, including Chicago, Denver and Baltimore, and left planes and crews out of position.

Delta Air Lines issued a travel waiver to let customers reschedule flights to and from Baltimore and Washington.

SkyWest, a regional carrier that operates flights under the names American Eagle, Delta Connection and United Express, grounded more than 300 flights Monday after scrubbing 500 on Sunday.

In Michigan, the authority that runs Detroit International Airport said crews were working around the clock to remove snow and maintain the airfield. Atlanta’s airport authority advised travelers to arrive earlier than usual because of high passenger volume, potential weather issues and pandemic-fueled staffing shortages that could lengthen the time it takes to get through security gates.

Thousands of miles from the snow storms, Hawaiian Airlines said it had to cancel several flights between islands and across the Pacific due to staffing shortages.

Airlines are paying temporary bonuses to encourage pilots and flight attendants to pick up flights left empty by co-workers with COVID-19. United will pay pilots triple their usual wages for picking up open flights through most of January. Spirit Airlines reached a deal with the union to pay flight attendants double through Tuesday.