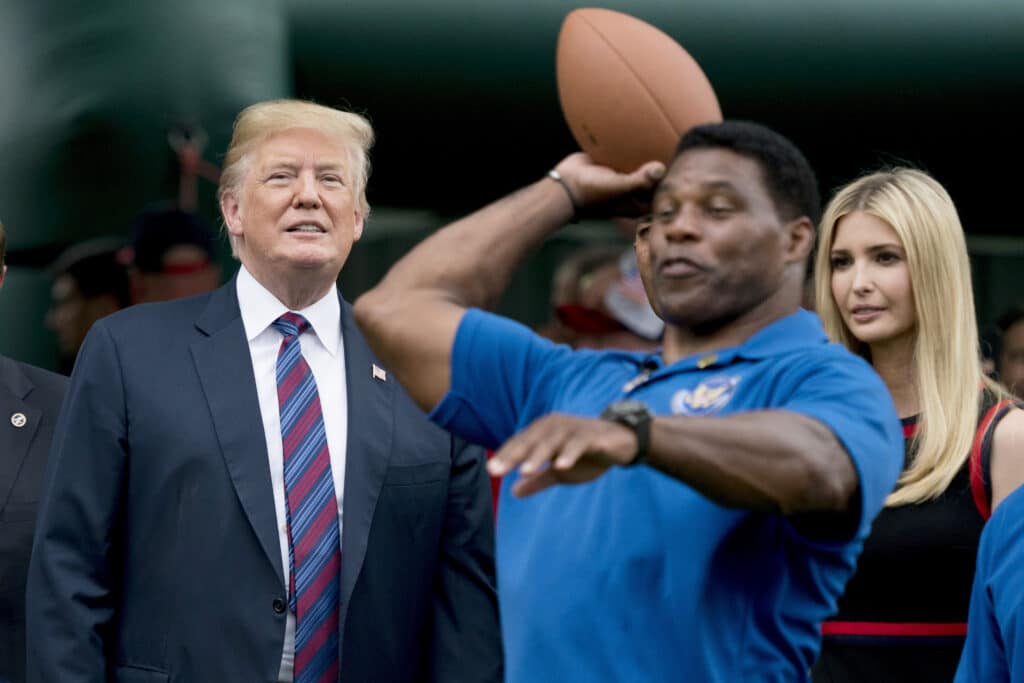 NFL star Herschel Walker is running for U.S. Senate in Georgia. Backed by former President Donald Trump and with significant name recognition, he will be a formidable candidate in the red state with a significant black population. He is challenging incumbent Democratic Sen. Raphael Warnock. The Associated Press has the story:

Walker, 59, joins the race with high name recognition, having won the Heisman Trophy in 1982 as a University of Georgia running back. Perhaps more importantly in today’s Republican Party, he carries the backing of former President Donald Trump.

Walker has never run for office and will likely face scrutiny over his turbulent personal history as well as policy stances. But if he emerges from the Republican primary, the Senate contest would feature two Black men vying for a seat in the heart of the Deep South.

Walker stayed mum Tuesday, continuing a pattern of few comments even as he started to put a Senate bid in motion. He registered to vote last week, using an Atlanta residence owned by his wife, Julie Blanchard. Walker signed Federal Election Commission papers Tuesday declaring his candidacy, allowing him to raise money for a Senate run.

Republicans already running for the Senate seat include state Agriculture Commissioner Gary Black, former banking executive and Navy veteran Latham Saddler and contractor Kelvin King. Some other potential GOP candidates may not run with Walker’s entry into the race, including former Sen. Kelly Loeffler, who lost a to Warnock in a January special election runoff, and U.S. Rep. Buddy Carter, a four-term congressman from near Savannah.

Walker is banking on Trump’s support to distinguish himself in the GOP primary. Their close relationship dates back to the 1980s, when Walker played for a Trump-owned team in the short-lived United States Football League. Walker, who went on to play 12 seasons in the NFL, spoke in support of Trump at the 2020 Republican National Convention and recently attended Trump’s private birthday celebration.

Trump has publicly encouraged Walker to enter the primary, telling a radio show in June that “he’s a great guy, he’s a patriot and he’s a very loyal person, he’s a very strong person. They love him in Georgia, I tell you.”

The former president’s support will be key in a Republican primary, but could be a liability in a general election in closely divided Georgia, where a crucial fraction of more affluent Republican voters defected to Democrat Joe Biden.

Walker could share a Republican ticket with Gov. Brian Kemp, a frequent target of Trump attacks, as Kemp seeks reelection. Trump has vowed vengeance against Kemp, saying he didn’t do enough to overturn Trump’s election loss. It’s unclear if that enmity would damage Republican chances, with Democrats possibly fielding a united ticket of Warnock and Stacey Abrams. Walker endorsed Kemp, who is a fervent Georgia football fan, in Kemp’s 2018 victory over Abrams.

Walker has been living outside Dallas and is making his first run for office. Untested as a candidate, it’s unclear whether Walker will be an adept campaigner or fundraiser, or whether he can build a network in a state where he hasn’t lived in more than 30 years. He has written about past mental illness and will likely have to address the issue again, while also fleshing out positions on policy matters he’s never had to address in detail. Walker has supported Trump’s baseless assertions that he was cheated out of reelection.

Although Trump supporters are firmly in control of Georgia’s Republican Party, a faction including some top donors are still unhappy about the loss of two Senate seats and might not welcome a Trump proxy in another Senate race.

Despite his fame as a football hero, Walker also has a turbulent personal history that could factor in a campaign.

An Associated Press review of public records uncovered detailed accusations that Walker repeatedly threatened the life of his ex-wife, Cindy Grossman, by telling members of her family that he would kill Grossman and her new boyfriend. Walker denied the accusations, but a judge granted a protective order in 2005 and for a time barred Walker from owning guns.

In 2008, Walker wrote a book that detailed his struggles with mental illness. He wrote that he was diagnosed in 2001 with dissociative identity disorder, once known as multiple personality disorder. He said he constructed alternate personalities as a defense against bullying he suffered as a stuttering, overweight child.

Walker also wrote of playing Russian roulette with a gun at his kitchen table in 1991. Overall, Walker cast his story as a turnaround, saying he found a path to “integration” because of therapy and his Christian faith.

The book caused problems for one of Walker’s key business relationships. In a 2019 legal deposition, a manager for the distributor Sysco said the company almost cut ties with Walker’s poultry company, Renaissance Man Food Services, when the book created “havoc.” Ultimately, Sysco stuck with Walker’s company until the controversy died down.

Walker has more recently made outsized claims about his business success. He he repeatedly claimed his company employed hundreds of workers and grossed $70 million or more in annual sales.

But Walker’s company reported just eight employees when it applied for a federal Paycheck Protection Program loan last year. In a recent court case, Walker gave revenue figures that were far more modest, indicating his company averaged about $1.5 million a year in profit from 2008 to 2017.

State election officials opened an investigation into his wife’s residency after The Atlanta Journal-Constitution reported that records show Blanchard voted in Georgia despite living in Texas. Walker is among Trump supporters who continue to repeat the president’s false claim that the 2020 election was stolen from him through fraud. Election officials nationwide found no widespread fraud.

But Walker’s football past and business ventures could be strong calling cards in the state. Supporters hope he can reach moderate Republicans as well as peel off some African Americans who traditionally vote for Democrats.

Walker was raised in Wrightsville, 50 miles (80 kilometers) east of Macon. He was the valedictorian at his high school and led the Johnson County Trojans to a state football championship. He was an Olympic bobsledder in 1992 and dabbled in mixed martial arts long after he retired from the gridiron.

Previous Article
Ex-girlfriend of R. Kelly testifies at trial
Next Article
Nasdaq soars above 15,000 for the first time