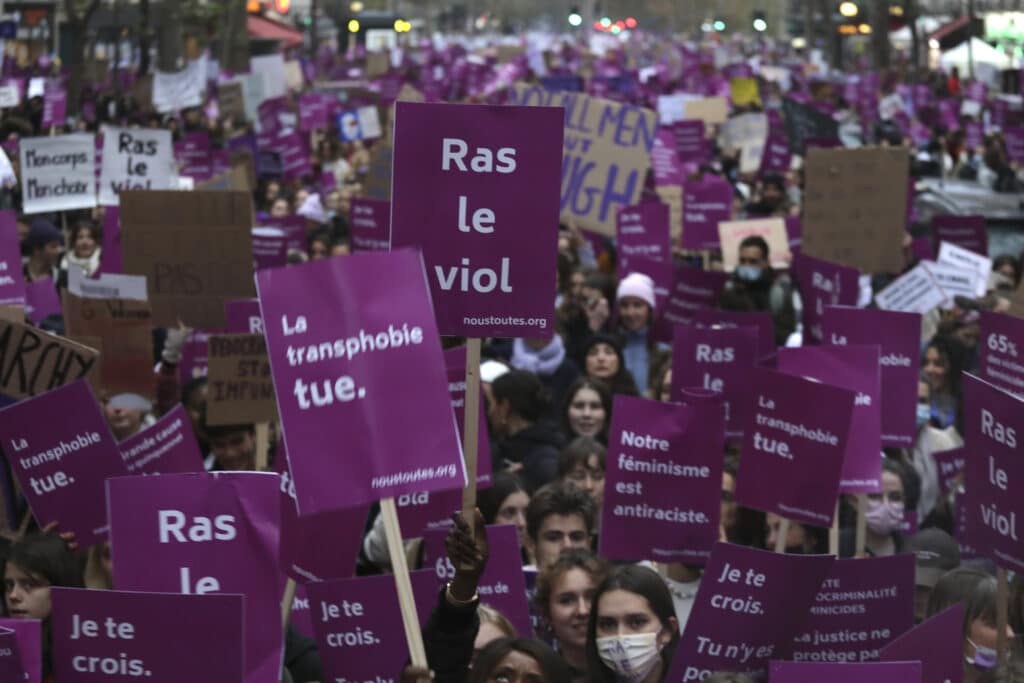 An annual survey led by national statistics institute INSEE found that only 10% of victims of sexual abuse in France file a formal complaint. The latest government initiative will try sending police officers where women have found shelter so that they can file formal complaints and feel more comfortable than doing that in a busy police station. As reported by the AP:

Other efforts made in recent years, include training more police officers, and the option of alerting police by text message or an internet platform

Junior Interior Minister Marlene Schiappa said alternative locations can include a friend’s home or some other place where abused women feel safe.

“There are women who tell us that they don’t dare to come to a police station because they are afraid of not being welcomed, because it’s hard to talk about things that are taboo (with) an unknown person in uniform in a foreign environment,” she said in an interview with The Associated Press. “That’s why we are lifting one after the other, the obstacles they are facing.”

An annual survey led by national statistics institute INSEE found that only 10% of victims of sexual abuse in France file a formal complaint.

And police this week reported a 10% increase in reports of domestic violence last year. It is estimated that more than 200,000 women each year are physically or sexually abused by their partner or ex-partner, according to INSEE.

The latest government initiative in France, will try sending police officers where women have found shelter so that they can file formal complaints. This will allow victims to stay “in an environment where you feel safe, at a friend’s house, at your lawyer’s house, at the hospital, at your doctor’s house,” Schiappa said.

This comes in addition to other efforts made in recent years, including training more police officers, creating a list of questions asked to assess danger, and the possibility to alert police by text message or an internet platform, she added.

The junior minister is in charge of supervising relations between police and female victims of violence. On Tuesday, she visited a renovated police station in Paris’ 13th arrondissement, now including an office providing privacy for those filing complaints, and a room dedicated to children, with toys and books.

The visit was part of other events this week aimed at marking Thursday’s International Day for the Elimination of Violence against Women.

The 13th arrondissement has been selected, along with other areas in the country, to implement the new process of filing complaints.

The measure comes after a viral online campaign on French social media denounced the shocking response of police officer’s victim-blaming women or mishandling their complaint as they reported sexual abuse. The hashtag #DoublePeine (#DoubleSentencing) rapidly counted at least 30,000 accounts of alleged mistreatment by police, according to activists.

“I want to value and support the action of the police forces … and to remind everyone once again that in the vast majority of cases, complaints are handled with a lot of empathy, a lot of support,” Schiappa said. “But for the minority of cases in which it goes badly, it is obviously inadmissible.”

The Interior Ministry in recent months sent instructions to police about the legal obligation to accept all complaints, following accounts by women saying they had been discouraged by officers from reporting abuse — sometimes with the argument of insufficient evidence.

“Refusing to receive a complaint is illegal,” Schiappa said. “We want the complaints to be forwarded to the public prosecutor’s office so that the justice system can take it over.”

Axelle Garnier de Saint Sauveur, a psychologist working with Paris police in France, to help take care of victims and train officers, said there are a series of obstacles to women reporting abuse.

When their partner has a hold on them, it “blocks everything. It prevents (them) from going towards protection, file a complaint,” she said. “You also have the fact that traumatic situations completely hinder the victim’s ability to think.”

Another reason is that “there is surely a part of fear, of ignorance about what to do when you are abused. How are you going to be treated” when filing a complaint.

On Saturday, tens of thousands of people marched through Paris and other cities to demand more government action on the issue. “We recalled that violence is everywhere. That it is not unavoidable,” women’s right group NousToutes tweeted.

Activists want the government to dedicate 1 billion euros ($1.1 billion) each year to fight violence against women, instead of the 360 million ($406 million) spent now — in part to create more shelters.

By MASHA MACPHERSON and SYLVIE CORBET