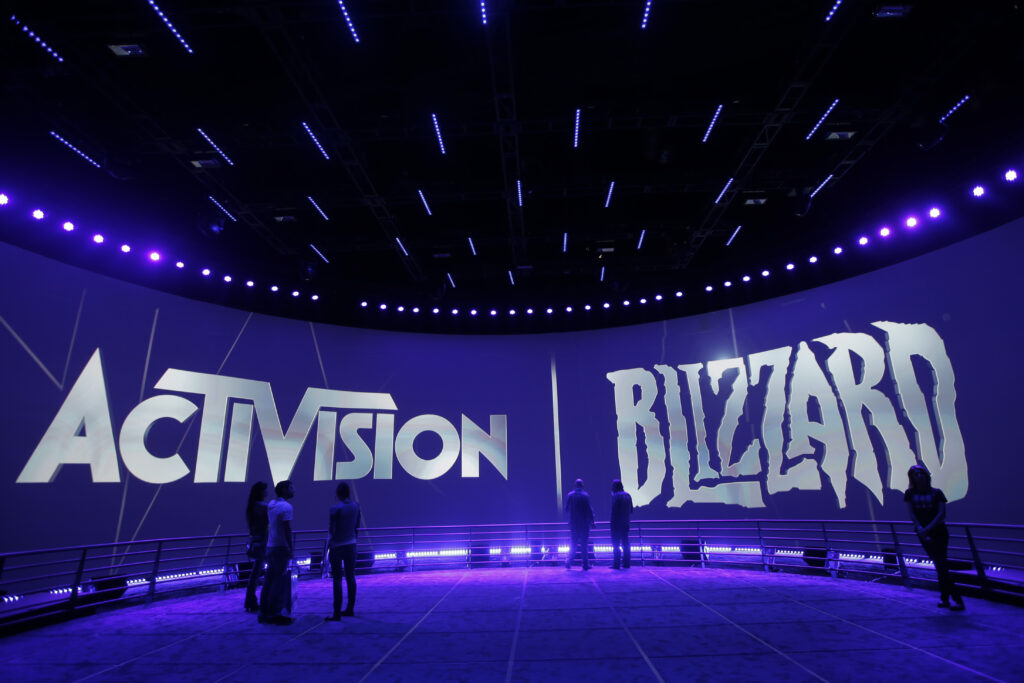 The FTC announced Thursday that it would sue to block Microsoft’s acquisition of gaming giant Activision Blizzard. Microsoft announced plans to buy the company, which has been plagued by sexual harassment and discrimination allegations and labor disputes, back in January for $68.7 billion. The Associated Press has the story:

The FTC’s challenge could be a test case for President Joe Biden’s mandate to scrutinize big tech mergers. The commission voted 3-1 to issue the complaint after a closed-door meeting, with the three Democratic commissioners voting in favor and the sole Republican voting against.

The complaint points to Microsoft’s previous game acquisitions, especially of well-known developer Bethesda Softworks and its parent company ZeniMax, as an example of where Microsoft is making some upcoming game titles exclusive to Xbox despite assuring European regulators it had no intention to do so.

“Microsoft has already shown that it can and will withhold content from its gaming rivals,” said a prepared statement from Holly Vedova, director of the FTC’s Bureau of Competition. “Today we seek to stop Microsoft from gaining control over a leading independent game studio and using it to harm competition in multiple dynamic and fast-growing gaming markets.”

The FTC said it was filing the complaint through its administrative process rather than taking the case to a federal court. That means an administrative law judge will hear the case.

Microsoft’s president, Brad Smith, signaled in a statement Thursday that the company is likely to challenge the FTC’s decision.

“While we believed in giving peace a chance, we have complete confidence in our case and welcome the opportunity to present our case in court,” Smith said.

The company had been ramping up its public defense of the deal in recent days as it awaited a decision. Smith said Microsoft has been committed to addressing competition concerns and brought proposed concessions to the FTC earlier this week.

“We continue to believe that this deal will expand competition and create more opportunities for gamers and game developers,” Smith said.

Microsoft announced the merger deal in January but has faced months of resistance from Sony, which makes the competing PlayStation console and has raised concerns with antitrust watchdogs around the world about losing access to popular Activision Blizzard game franchises such as the military shooter game Call of Duty.

Antitrust regulators under Biden “have staked out the view that for decades merger policy has been too weak and they’ve said, repeatedly, ‘We’re changing that,’” said William Kovacic, a former chair of the FTC.

That has put pressure on the FTC to fulfill its bold promises to “not allow dodgy deals and not accept weak settlements,” said Kovacic, who was a Republican commissioner appointed in 2006 by then-President George W. Bush. But he said Microsoft has a good chance of winning its legal challenge.

“It’s evident that the company has been making a number of concessions,” he said. “Microsoft would likely raise them in court and say the FTC is being incorrigibly stubborn about this.”

Microsoft announced its latest promise Wednesday, saying it would make Call of Duty available on Nintendo devices for 10 years should its acquisition go through. It has said it tried to offer the same commitment to Sony.

In an appeal to Biden administration priorities, Microsoft had also sought to characterize its deal as worker-friendly after announcing a “labor neutrality agreement” in June with the Communications Workers of America that would allow workers to unionize after the acquisition closes. The union’s president, Chris Shelton, wrote an opinion column in The Hill this week calling on the FTC to “seal the deal, not blow it up.”

The deal is also under close scrutiny in the European Union and the United Kingdom, where investigations aren’t due to be completed until next year.

FTC’s decision to send the complaint to its in-house judge instead of seeking an urgent federal court injunction to halt the merger could drag the case out for months and give more “confidence to authorities outside the U.S. to take a swing at the deal on their own,” said Kovacic, who is now a professor at George Washington University Law School.

Activision Blizzard CEO Bobby Kotick said in a message to employees Thursday that the FTC’s action “sounds alarming, so I want to reinforce my confidence that this deal will close.”

“The allegation that this deal is anti-competitive doesn’t align with the facts, and we believe we’ll win this challenge,” Kotick wrote.

Kotick said the deal will be good for players, employees, competition and the industry.

“We believe these arguments will win despite a regulatory environment focused on ideology and misconceptions about the tech industry,” he said.

Led by FTC Chair Lina Khan, a legal scholar who’s advocated for tougher antitrust enforcement, the commission is made up of three Democrats and one Republican after a second Republican stepped down earlier this year and left an open seat on the panel.

Democratic U.S. Sen. Elizabeth Warren tweeted Thursday that she welcomed the FTC action, noting that she had urged Khan to scrutinize the proposed merger.

“Corporate monopolies have had free rein to hike prices and harm workers, but now the Biden admin is committed to promoting competition,” Warren said.

Both the Justice Department and the FTC this year have looked at strengthening merger guidelines to better detect and prevent illegal and anticompetitive deals. The agencies have been stressing the importance of robust competition to the economy, workers, consumers and small businesses.

In that case, the FTC sued to prevent Meta’s acquisition of Within Unlimited and its fitness app Supernatural, asserting it would hurt competition and violate antitrust laws.

Microsoft in recent years has largely escaped the more intense regulatory backlash its tech rivals such as Amazon, Google and Meta have endured. But the sheer size of the Activision Blizzard acquisition — which could be the priciest in tech industry history — has drawn attention.

Microsoft’s last big antitrust battle occurred more than two decades ago when a federal judge ordered its breakup following the company’s anticompetitive actions related to its dominant Windows software. That verdict was overturned on appeal, although the court imposed other, less drastic, penalties on the company.

Previous Article
Who can replace Messi, Ronaldo after World Cup?
Next Article
US hoped for not only Griner swap, but Whelan too