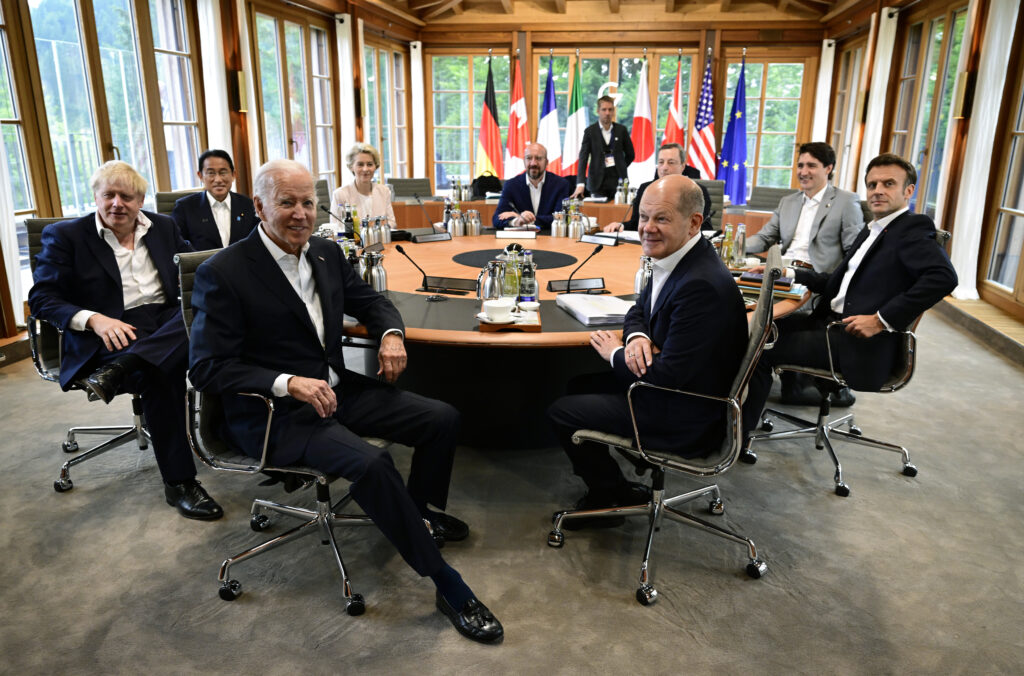 This promise to hurt Russia economically, is something the G-7 leaders all pledged when the West brought down tough sanctions on Russia and its leader Vladimir Putin, but it would seem that the heads of the prominent democracies fail to understand socialism, and most importantly have greatly underestimated Putin. The Russian leader is wealthy, really wealthy, and like all good Russian dictators before him, he is standing on the backs of his people, living off of the wealth they produce for him. There is only one thing Vladimir Putin understands, brute force. As reported by the AP:

Before the summit’s close, leaders joined in condemning the Russian attack on its neighbor, and said how appalled they are over the human rights violations that have been committed

ELMAU, Germany (AP) — Leaders of the world’s wealthiest democracies struck a united stance Tuesday to support Ukraine for “as long as necessary” as Russia’s invasion grinds on and said they would explore far-reaching steps to cap Kremlin income from oil sales that are financing the war.

The final statement from the Group of Seven summit in Germany left out key details on how the fossil fuel price caps would work in practice, setting up more discussion in the weeks ahead to “explore” measures to bar import of Russian oil above a certain level. That would hit a key Russian source of income and, in theory, relieve the energy price spikes afflicting the global economy as a result of the war.

Leaders also agreed on a ban on imports of Russian gold and to step up aid to countries hit with food shortages by the blockage on Ukraine grain shipments through the Black Sea.

ELMAU, Germany (AP) — The G-7 on Tuesday was wrapping up a summit intended to send a strong signal of long-term commitment to Ukraine’s future, ensuring that Russia pays a higher price for its invasion while also attempting to alleviate a global hunger crisis and show unity against climate change.

Before the summit’s close, leaders joined in condemning what they called the “abominable” Russian attack on a shopping mall in the town of Kremechuk, calling it a “war crime” and vowing that President Vladimir Putin and others involved “will be held to account.”

The leaders of the U.S., Germany, France, Italy, the U.K., Canada, and Japan on Monday pledged to support Ukraine “for as long as it takes” after conferring by video link with Ukrainian President Volodymyr Zelenskyy.

The summit host, German Chancellor Olaf Scholz, said he “once again very emphatically set out the situation as Ukraine currently sees it.” Zelenskyy’s address, amid a grinding Russian advance in Ukraine’s east, came hours before Ukrainian officials reported a deadly Russian missile strike on a crowded shopping mall in the central city of Kremenchuk.

Officials have said during the summit that leaders of the major economies are preparing to unveil plans to pursue a price cap on Russian oil, raise tariffs on Russian goods and impose other new sanctions. Agreement on some of the complexities of the oil price cap — such as whether it would apply only to Russia or to other oil producers — could be left for further discussions beyond the summit.

From the secluded Schloss Elmau hotel in the Bavarian Alps, the G-7 leaders will continue straight to Madrid for a summit of NATO leaders — where fallout from Russia’s invasion of Ukraine will again dominate the agenda. All G-7 members other than Japan are NATO members, and Japanese Prime Minister Fumio Kishida has been invited to Madrid.

Zelenskyy has openly worried that the West has become fatigued by the cost of a war that is contributing to soaring energy costs and price hikes on essential goods around the globe. The G-7 has sought to assuage those concerns.

While the group’s annual gathering has been dominated by Ukraine and by the war’s knock-on effects, such as the challenge to food supplies in parts of the world caused by the interruption of Ukrainian grain exports, Scholz has been keen to show that the G-7 also can move ahead on pre-war priorities.

The summit host has been keen to secure agreement on the creation of a “climate club” for countries that want to speed ahead when it comes to tackling global warming.

After a meeting Monday with leaders of five developing nations, a joint statement issued by Germany emphasized the need to accelerate a “clean and just energy transition” that would see an end to the burning of fossil fuels without causing a sharp rise in unemployment.

By ZEKE MILLER and GEIR MOULSON