GOP gov. will fight ‘to the gates of hell’ against mandate 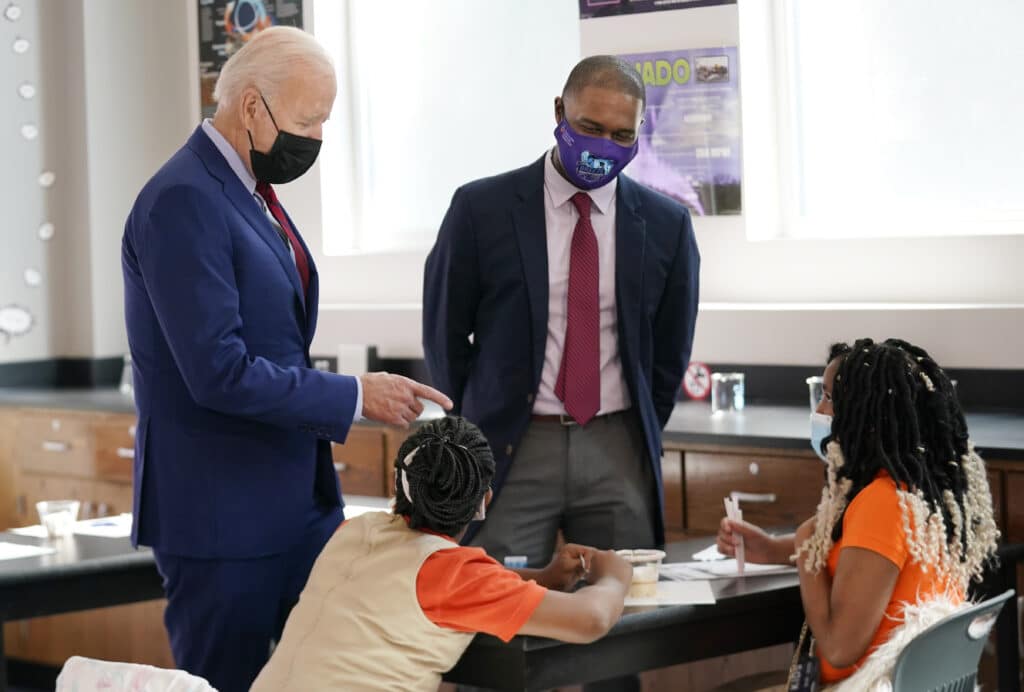 Republican reaction to President Joe Biden implementing a vaccine mandate for businesses was swift and harsh. South Carolina Gov. Henry McMaster says he will fight “to the gates of hell to protect the liberty and livelihood of every South Carolinian.” The Associated Press has the story:

Biden not backing down from vaccine mandate, exploring going even further

WASHINGTON (AP) — President Joe Biden’s aggressive push to require millions of U.S. workers to vaccinate against the coronavirus is running into a wall of resistance from Republicans threatening everything from lawsuits to civil disobedience, plunging the country deeper into culture wars that have festered since the onset of the pandemic.

In South Carolina, Gov. Henry McMaster says he will fight “to the gates of hell to protect the liberty and livelihood of every South Carolinian.” South Dakota Gov. Kristi Noem, a potential 2024 presidential candidate, says she is preparing a lawsuit. And J.D. Vance, a conservative running for a U.S. Senate seat in Ohio, describes Biden’s move as Washington’s “attempt to bully and coerce citizens.”

“Do not comply with the mandates,” Vance says.

Biden is hardly backing down. In a visit to a school on Friday, he accused the governors of being “cavalier” with the health of American youngsters, and when asked about foes who would file legal challenges, he retorted, “Have at it.”

The opposition follows the new round of rules Biden outlined on Thursday in a new effort to tame the coronavirus by mandating that all employers with more than 100 workers require them to be vaccinated or test for the virus weekly, affecting about 80 million Americans. Another 17 million workers at health facilities that receive federal Medicare or Medicaid also will have to be vaccinated.

Biden’s move has unified Republicans who sometimes have taken different approaches to the pandemic. From state capitals to Congress and the campaign trail, Republicans — even those who support vaccination — are blasting Biden’s more forceful approach.

“The vaccine itself is life-saving, but this unconstitutional move is terrifying,” tweeted Mississippi Republican Gov. Tate Reeves.

More than 208 million Americans have received at least one vaccine dose, but some 80 million remain unvaccinated as the U.S. confronts the highly contagious delta variant. There are now about 300% more new daily COVID-19 infections, about two-and-a-half times the hospitalizations and nearly twice the number of deaths as at the same time last year.

While breakthrough infections do happen among the vaccinated, those cases tend to be far less severe, with the vast majority of deaths and severe illnesses occurring among those who have not yet received the shots.

The pandemic is worsening in many of the states where governors are most loudly protesting the president’s actions. South Carolina, for example, is averaging more than 5,000 new cases per day and has the nation’s second-highest infection rate. A hospital system there started canceling elective surgeries this week to free staff to help with a crush of COVID-19 patients.

Overwhelmed hospitals in a section of Idaho have implemented new crisis standards to ration care for patients. More than 50 hospitals across Georgia are turning away ambulances bringing emergency or ICU patients.

Republicans and some union officials say the president is overreaching his constitutional authority.

He says he’s doing what has to be done. And in his White House speech announcing the new measures, he took a particularly pointed stance, accusing elected officials of “actively working to undermine the fight against COVID-19.”

“Instead of encouraging people to get vaccinated and mask up, they’re ordering mobile morgues for the unvaccinated dying from COVID in their communities,” he said.

Biden pointed directly to GOP governors who have blocked measures such as school mask mandates, warning, “If these governors won’t help us beat the pandemic, I’ll use my power as president to get them out of the way.”

Vaccine mandates are supported by a small majority of Americans. An August poll from The Associated Press-NORC Center for Public Affairs Research found majorities support requiring health care workers, teachers at K-12 schools and public-facing workers like those in restaurants and stores to be fully vaccinated. Overall, 55% back vaccine mandates for government workers. And about half of working adults favor vaccine mandates at their workplaces.

But the numbers are deeply polarized, with Democrats far more likely to support mandates than Republicans, who have also been less supportive when it comes to getting shots themselves.

While demand for vaccinations has risen over the summer, a persistent number of Americans have told pollsters they have no intention of ever receiving them.

GOP pollster Frank Luntz, who has held focus groups and worked with the Biden administration to try to combat vaccine hesitance, says that, without further measures, Biden is likely to see vaccinations top out at about 75% of the population.

“The only way to exceed that, which he needs to for herd immunity, is to mandate it,” Luntz said. “It will make a lot of people angry and even more resistant, but those who are simply hesitant will act now. He’s done the best he can under the circumstances.”

Still, many Republicans are unmoving and unforgiving, especially those who are running for office.

Mike Gibbons, who is running for the U.S. Senate in Ohio, accused “Joe Biden and his Big Brother administration” of having “crossed into authoritarian territory.”

“The American people have a right to assess the risks and benefits of the vaccine and make the decision on what is best for themselves and their families,” he said. “That decision should be made by doctors and the individual, not the government.”

With the midterm elections just over a year away, Drew McKissick, South Carolina’s GOP chairman, says he imagines Democrats in his state being tied to their party’s “radical liberal” policies.

Republicans in Congress have joined the criticism.

“Are you people trying to start a full-on revolt?” tweeted Texas Rep. Dan Crenshaw. “Honestly what the hell is wrong with Democrats? Leave people the hell alone. This is insanity.”

Crenshaw is vaccinated and has promoted the COVID-19 vaccine’s safety to his constituents. But he said “the right path is built upon explaining, educating, and building trust, including explaining the risks/benefits/pros/cons in an honest way so a person can make their own decision. The Biden Administration has completely failed in that regard.”

Wisconsin Sen. Ron Johnson, who has repeatedly questioned the vaccine, said Biden’s policy is “a level of coercion that I find highly disturbing.”