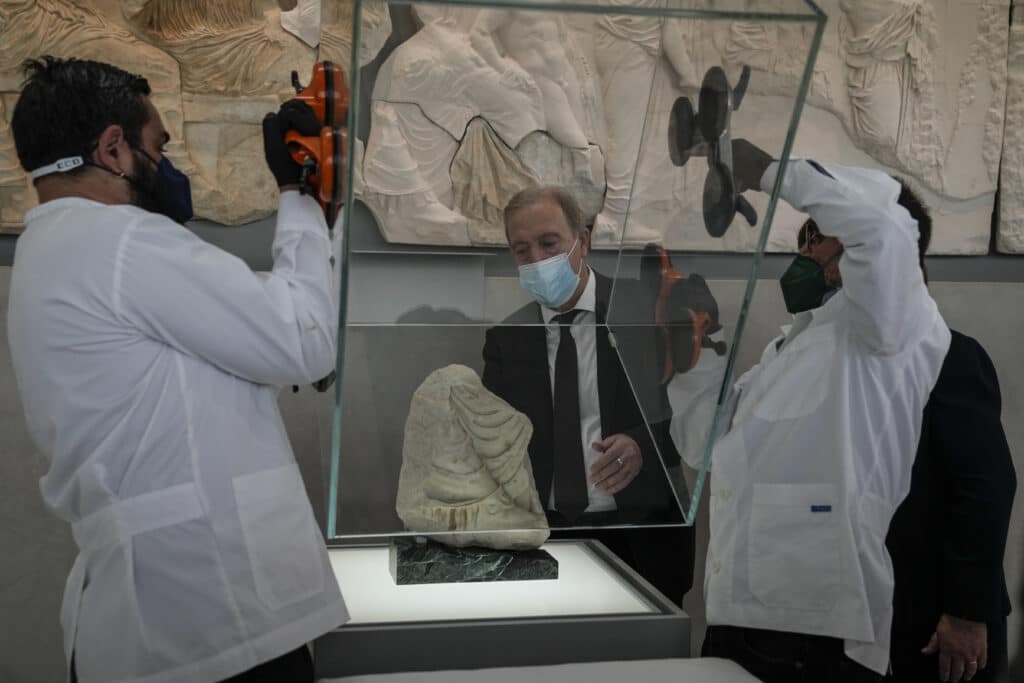 The British museum has some of the Parthenon Sculptures, and Greece is hoping that a fragment from an ancient Greek goddess on loan from an Italian museum will persuade the UK to return them. The fragment is from a frieze that ran around the outer walls of the Parthenon Temple on the Acropolis. The Associated Press has the story:

ATHENS, Greece (AP) — It’s only the size of a shoebox, carved with the broken-off foot of an ancient Greek goddess.

But Greece hopes the 2,500-year-old marble fragment, which arrived Monday on loan from an Italian museum, may help resolve one of the world’s thorniest cultural heritage disputes and lead to the reunification in Athens of all surviving Parthenon Sculptures — many of which are in the British Museum.

Greek Prime Minister Kyriakos Mitsotakis said the Sicilian museum’s gesture “opens the way, I believe, for other museums to be able to move in a similar direction.”

“Most importantly, of course, the British Museum, which must now realize that it’s time for the Parthenon marbles … to finally return here, to their natural home,” he added, voicing gratitude to Italy for the loan.

The fragment was part of a 160-meter-long (520-foot) frieze that ran around the outer walls of the Parthenon Temple on the Acropolis, dedicated to Athena, goddess of wisdom. Much was lost in a 17th-century bombardment, and about half the remaining works were removed in the early 19th century by a British diplomat, Lord Elgin. They ended up in the British Museum, which has repeatedly rebuffed Greek demands for their return.

Officially, Sicily’s A. Salinas Archaeological Museum is only lending the foot of Artemis, goddess of the hunt, to Greece for a maximum of eight years. But the ultimate aim, Italian and Greek officials say, is its “indefinite return” to Athens. In exchange, Greece will loan significant antiquities to Italy.

“The solution we found proves that, where there is will among museums and the cultural authorities of two countries, there can be a mutually acceptable solution,” Mitsotakis said during a ceremony at the Acropolis Museum, where Greece’s surviving sections of the frieze are inset among casts of those in London.

Artemis’ foot will snuggle in like a missing jigsaw piece between two original fragments and a copy of a larger section now in London.

Successive Greek governments have lobbied for the return of the British Museum’s share of the works, which include statues from the Parthenon’s pediments — the all-marble building’s gables. They argue that Elgin illegally sawed off the sculptures, exceeding the terms of a questionable permit granted by Turkish authorities while Greece was an unwilling part of the Ottoman Empire.

The British Museum rejects that stance and — despite indications that public opinion in the U.K. favors the Greek demand — has shown no intention of permanently returning the works.

Mitsotakis raised the matter again in a meeting with British Prime Minister Boris Johnson in London in November. He said Monday he was “encouraged” by Johnson saying the British government wouldn’t oppose a potential deal on the sculptures’ return — should the British Museum and Greece reach one.

The Italian fragment, which measures 31 by 35 centimeters (12 by 14 inches), was acquired under unknown circumstances by 19th-century British consul in Sicily Robert Fagan, and his widow sold it to the Sicilian museum’s precursor.

Acropolis Museum director Dimitris Pantermalis said the marble foot may have been dislodged from its place in 1687, when a mortar fired by besieging Venetian forces hit the Parthenon, which the Acropolis’ Turkish garrison was using as a gunpowder store. But, he said, it was in better condition than other surviving frieze fragments.

“In all other cases, the surface is slightly scratched,” he said. “Here it has the freshness of the original, and that makes us proud.”

The Parthenon was built between 447-432 B.C. and is considered the crowning work of classical architecture. Despite being successively used as a church and a mosque, it survived virtually intact until the Venetian siege.

The frieze depicted a procession in honor of Athena. Some small bits of it — and other Parthenon sculptures — are in other European museums.

Previous Article
Democrats use Jan. 6 to push voting legislation
Next Article
Friends shocked and saddened by death of Bob Saget