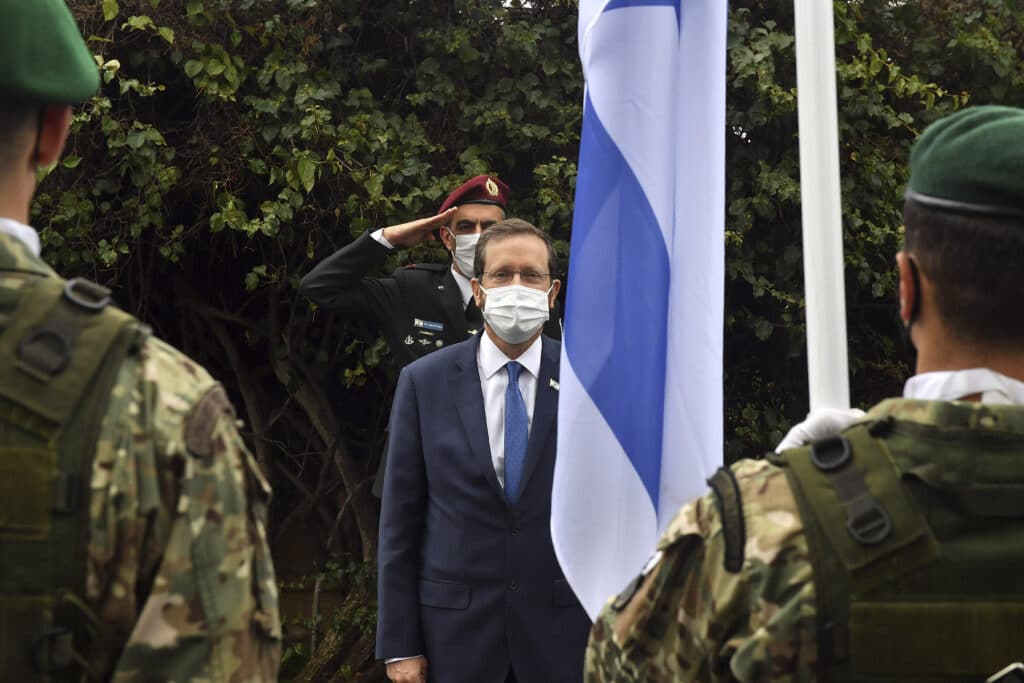 Twelve years after the Mavi Marmara incident (in which 9 Turks on board the humanitarian vessel en route to Gaza were killed by Israeli commandos) led to a breakdown in Israel-Turkey relations, the two countries are preparing to “turn a corner” next week, as Israeli President Isaac Herzog will visit Ankara and meet with Turkish President Recep Tayyip Erdogan.

Since Israel’s establishment in 1948, Turkish-Israeli relations have known many ups and downs, but in the 1990’s and early 2000’s, the relationship turned into a strategic partnership, as the two sides enjoyed close military cooperation, including in counter terrorism and intelligence sharing, as well as strong economic ties and tourism. When Erdogan became Turkey’s Prime Minister (PM) in 2003, he continued to promote friendly ties with the Jewish state, but when Israel invaded Gaza in late 2008 without giving Turkey prior notice, the Israeli-Turkish “honeymoon” period was all but over.

The May 31, 2010 Mavi Marmara incident was the final blow to the relationship as Erdogan accused Israel of carrying out a genocide against the Palestinians, ordered the Turkish Ambassador in Tel Aviv to return home and expelled the Israeli Ambassador. The political dialogue between Jerusalem and Ankara was frozen, defense cooperation and mutual high-level visits came to a halt and tourism stopped almost completely, as trade ties were the only element keeping the relationship afloat.

At the behest of President Obama, Israel apologized to Turkey over the Mavi Marmara incident (2013) and later agreed to pay compensation to the families of the victims, paving the way to a normalization agreement between the two countries signed in July 2016, which was in effect until May 2018, when the U.S officially inaugurated its embassy in Jerusalem, on a day that saw IDF soldiers kill more than sixty Palestinian protesters near the Gaza-Israel fence, leading Erdogan once again to order the lowering of diplomatic relations, thus ceasing all contacts between the two governments.

The main bone of contention between Turkey and Israel has been the Palestinian issue. Turkey has been very critical of Israeli policies and President Erdogan has often attacked Israel’s leaders for their handling of the Palestinian issue. Moreover, Turkey was among the main backers of Hamas in Gaza (politically and ideologically, as well as financially) and has allowed the organization to establish a representation office in Istanbul, much to the dismay of Israel which regards Hamas as a terrorist organization. The divide over the Palestinian issue was further exacerbated by Erdogan’s harsh anti-Israeli rhetoric which Israelis believed to border antisemitism and a deep animosity which developed between then Israeli PM Benjamin Netanyahu and Erdogan. The negative trajectory in relations led Israel to align more closely with other Eastern Mediterranean nations, forming a new regional axis of cooperation with Greece and Cyprus, all concerned with Turkey’s regional posture.

Despite differences over the Palestinian issue, the two countries traditionally viewed trends and developments in the Middle East region in a similar way, both attaching great importance to stability in Syria, believing Iran should not have nuclear weapons, and prioritizing the fight against terror. Interestingly, in the current Russia-Ukraine crisis both Turkey and Israel have chosen a certain form of neutrality, not too closely aligning with the U.S and attempting not to disrupt their relations with Moscow, while offering to mediate between Presidents Putin and Zelensky.

On the economic side, leaders in both countries made sure that political tensions would not disrupt business and investments, as overall trade peaked to nearly 5.75 billion dollars in 2020, (and during COVID-19 it dropped to under 5 billion dollars), with Turkey listed among Israel’s top 10 trade partners. Israel’s discovery of natural gas off its shores in the Eastern Mediterranean was viewed by both sides as a possible game changer, with Israel potentially laying an undersea pipeline exporting natural gas to Turkey and from there to southern Europe. Plans for such a pipeline have been shelved in recent years but may possibly be revisited in the near future if bilateral relations improve.

Over the past decade it was Erdogan who dictated the nature of the relationship, with Israel in a more reactive mode.

The creation of a new national unity government in Israel in June 2021, led by PM Naftali Bennett, which includes an Arab Islamist Party, and with Netanyahu gone, was viewed very positively in Ankara. Isaac Herzog’s election as President in July provided Erdogan an opportunity to reach out to Herzog and establish a channel of communication with the Israeli president, whose role is more ceremonial and is considered apolitical. A series of events in recent months, led to three more telephone conversations between Erdogan and Herzog, and one telephone conversation between Erdogan and Bennett, signaling a possible rapprochement. The decision to invite Herzog was a carefully thought-out plan by Erdogan and his advisors and may serve as a first step in normalizing the strained relations.

Other drivers include Turkey’s prolonged economic crisis which has led Erdogan to reach out to Israel and other regional economic powers such as Saudi Arabia and the UAE in an effort to thaw relations and seek support. Additionally, improving relations with Israel was always considered by Turkey as a way to gain favor with Washington and the present circumstances are no different.

The Abraham Accords signed in 2020 between Israel, the UAE, Bahrain and Morocco also made it clear to Erdogan that the region is moving in a different direction and that Turkey may be left behind if it does not normalize ties with Israel.

Finally, the option of resuming bilateral discussions on natural gas cooperation seems most appealing to Turkey, especially as the U.S has recently announced it no longer supports the EastMed Pipeline (between Israel, Cyprus, Greece and Italy).

In recent days, President Herzog visited Greece and Cyprus in an attempt to allay their concerns regarding his visit to Turkey, underscoring the message that normalization with Ankara will not be at the expense of relations with Athens and Nicosia. Nevertheless, Herzog’s visit will only be a first step and in a long process of normalization. There is a keen interest on both sides to see it succeed, but much will depend on developments on the Palestinian issue, as well as the willingness of leaders to discuss differences in discrete channels and not air out differences in the public domain.