Honduras asked by US to extradite ex-President Hernández 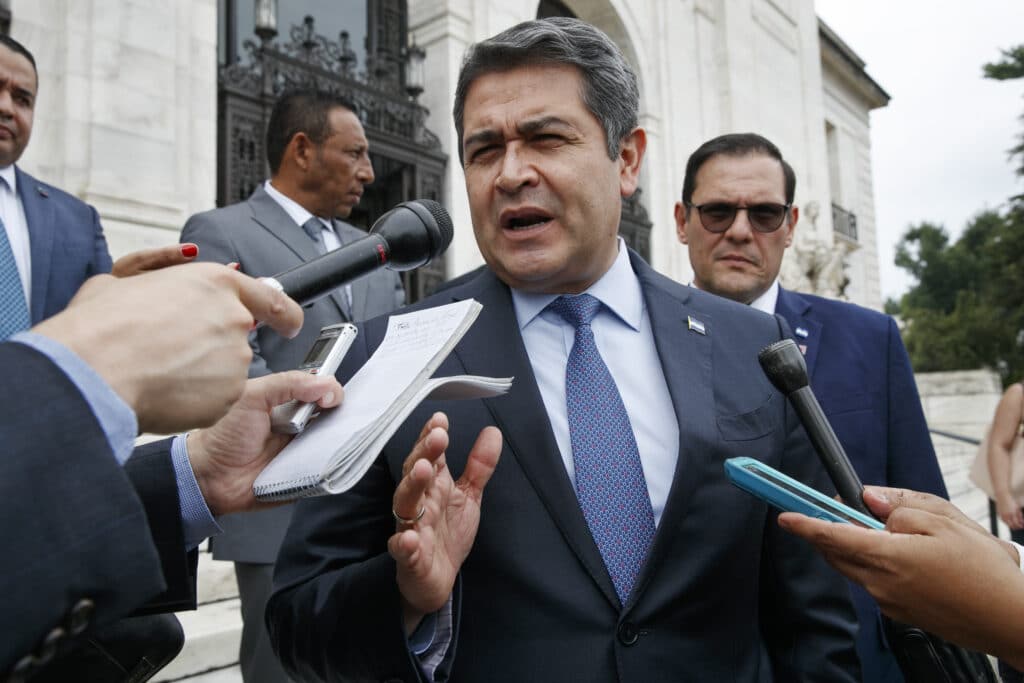 The United States has wanted former Honduran President Juan Orlando Hernández for years on a slew of drug charges, but as long as he was in power, extradition was out of the question. Now, just less than three weeks after Hernández left office, the US has put in a formal request for the ex-president’s extradition to America, to face charges, and an emergency court proceeding was called to immediately hear the case. As reported by the AP:

The specific charges Hernández faces were not released, but federal prosecutors in New York had  previously named him a co-conspirator in a drug trafficking case

TEGUCIGALPA, Honduras (AP) — The United States formally requested the arrest and extradition of former President Juan Orlando Hernández less than three weeks after he left office, after years of speculation about his alleged links to drug traffickers.

The specific charges Hernández faces were not released, but federal prosecutors in New York had previously named him a co-conspirator in a drug trafficking case, alleging that his political rise was fueled with drug profits. Hernández has long denied any wrongdoing.

Nicole Navas, a spokeswoman for the U.S. Department of Justice, declined to comment.

In a video released by Hernández’s legal team, apparently from inside his home, attorney Félix Ávila said that everything would have to wait until a judge was selected. “Meanwhile, it is understood that no arrest order exists.”

However, at a police barrier to the neighborhood, Rasel Tomé, vice president of the newly elected National Congress, said that Hernández had to turn himself in or he would be arrested.

Hernández released an audio recording via Twitter early Tuesday thanking those praying for him.

He said the National Police had already been informed by his lawyers that “I am ready and prepared to cooperate and go voluntarily … to able to face this situation and defend myself.”

Attention turned Tuesday to the Supreme Court’s 15 justices. The court’s President Rolando Argueta is known to be close to Hernández. All of the justices were selected to the court by the Congress in 2016 during Hernández’s first presidential term. They serve seven-year terms.

The majority come from his National Party.

It was a long-awaited fall for a leader reviled in his home country who enjoyed support from the Trump administration but had been kept at arm’s length by a Biden White House, which has targeted Central America’s endemic corruption as a root cause of migration.

Hernández left office Jan. 27 with the swearing in of President Xiomara Castro. The same day, he was sworn in as Honduras’ representative to the Central American Parliament.

One of his lawyers, Hermes Ramírez, told local media his client had immunity as a member of the regional parliament and said government forces were not following proper procedures. He said Hernández was inside the home.

Various contingents of the National Police, including special forces as well as military police, were present around Hernández’s neighborhood Monday night. Barriers at all of the entrances kept out media and even residents.

Members of the security forces entered the area with weapons, wearing balaclavas and with handcuffs dangling from their ballistic vests.

Hernández often pointed to the fact that Honduras began allowing the extradition of its citizens on drug trafficking charges while he was president of the Congress as part of his defense.

But U.S. prosecutors have alleged that he was taking bribes from drug traffickers on the promise of protecting them once he was president.

U.S. prosecutors in New York repeatedly implicated him during his brother’s 2019 drug trafficking trial, alleging that his political rise was fueled by drug profits.

That brother, Juan Antonio “Tony” Hernández, himself a former Honduran congressman, was sentenced to life in prison on drug and weapons charges in March 2021. At his sentencing Assistant U.S. Attorney Matthew Laroche characterized the crimes as “state-sponsored drug trafficking.”

“This is a party we’ve been waiting a long time for,” Vega said, thinking back over the dozen years since Hernández came up in the Congress. “We couldn’t stand this drug trafficker, criminal, killer in the presidential house any longer.”

By MARLON GONZÁLEZ and CHRISTOPHER SHERMAN

Christopher Sherman reported from Mexico City. Elmer Martínez in Tegucigalpa, and Claudia Torrens in New York, contributed to this story.