ILAN Berman on the results of the Moroccan elections 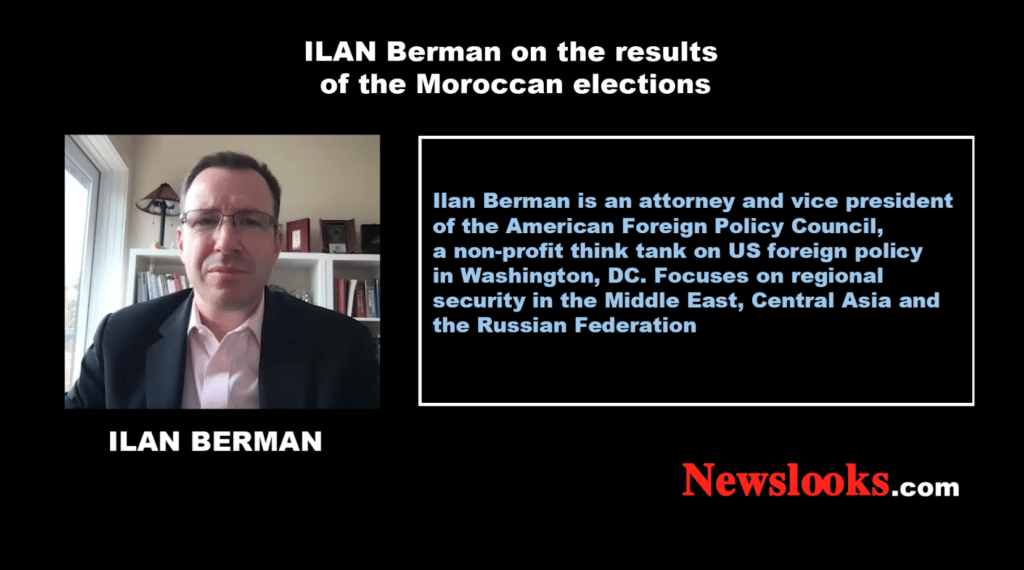 ILAN Berman on the results of the Moroccan elections

The results of the Moroccan legislative and local elections were officially announced with a great victory for the liberal parties, led by the National Rally of Independents, which won 102 seats, followed by the Authenticity and Modernity Party with 87 seats, and the Istiqlal Party with 81 seats.

The biggest surprise came with the loss of the Justice and Development Party after 10 years of leading the government, as it came in eighth place with only 13 seats.

King Mohammed VI, in line with the requirements of Article 47 of the 2011 constitution, received the Secretary-General of the National Rally of Independents, Aziz Akhannouch, and assigned him to form a government.

To discuss these results and their links to the political life in Morocco, We are pleased to host Mr.ILAN Berman

Ilan is an attorney and vice president of the American Foreign Policy Council, a non-profit think tank on US foreign policy in Washington, DC. Focuses on regional security in the Middle East, Central Asia and the Russian Federation

In this interview, Mr. Ilan Berman answers a set of questions related to Moroccan political life, and what are the reasons that, in his view, led to the great defeat of the Justice and Development Party after ten years in power.

The American expert asserts that the most important motives of this defeat are due to this party’s inability to manage the country’s internal affairs and its failure to adhere to the promises it made to the Moroccan voter ten years ago.
Mr. Berman confirmed that the fall of the Justice and Development Party has anything to do with the desire for change for the sake of change among the Moroccan citizens. Rather, he believes that there are logical reasons that imposed this result.
Contrary to the obstruction experienced by the Islamists’ parties in Algeria, Egypt and the Arab world in general, Mr. Berman stresses the distinction of the Moroccan experience, which gave the them ten years in government, during which Morocco established the principle of rotation in power between all political parties in the country, with democracy and transparency.
Morocco’s experience in the democratic transfer of power, in Mr. Berman’s view, made the Kingdom a distinct case and even a role model among all the countries of the region, stressing that Morocco has gone a long way in consolidating the principles of democracy compared to its neighbors in North Africa.
Regarding the strong participation of the residents of the southern regions of the Kingdom , the American expert stressed that this participation is a clear message through which the residents of the southern regions of Morocco confirmed their voluntary involvement in the Moroccan democratic project, which in his view enhances the strength and solidity of the Moroccan proposal for autonomy under Moroccan sovereignty as a just solution to the issue the desert.
As for the Polisario’s rejection of the Sahrawis’ vote in the Moroccan elections, the American expert underestimated this rejection, considering it meaningless when compared with the large percentage of this participation.
Mr. Ilan Berman also used this interview to express his regret over the heinous attack that killed two Moroccan citizens and wounded a third in Mali at the hands of two terrorists.
Morocco is in an area fraught with the danger of terrorist groups along the African Sahel, he added that stressing that Morocco’s cooperation in combating terrorism places it in an important rank as a reliable and credible ally.