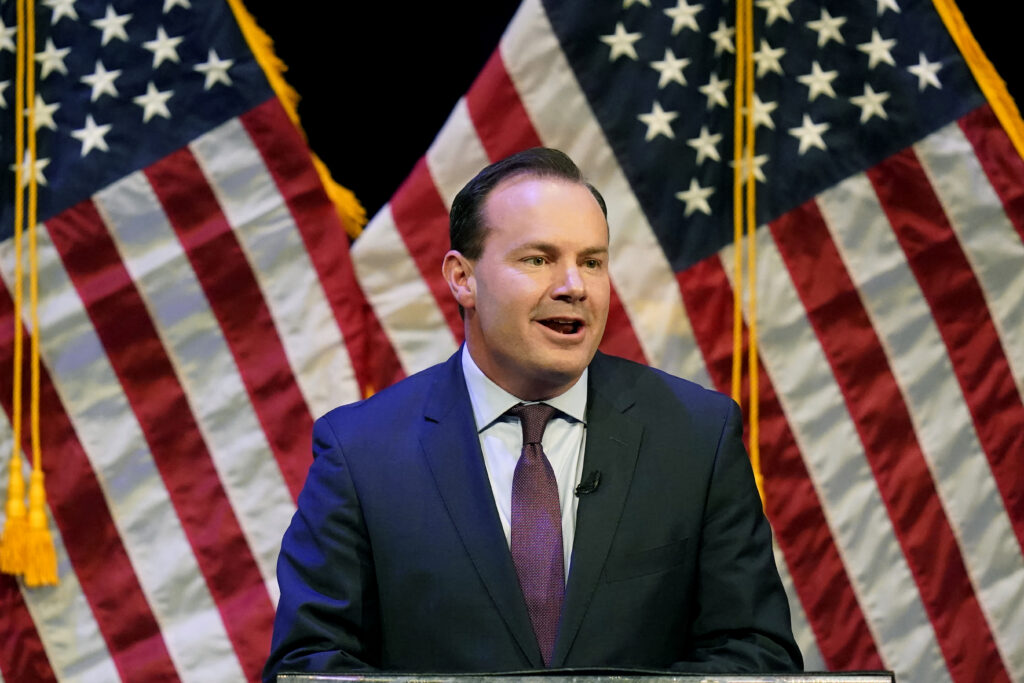 Sen. Mike Lee faces his first test of 2022 in Utah’s Republican primary Tuesday, and it remains to be seen if his ties to former President Donald Trump an asset to him or how much of a liability it will be. Lee has responded to the texts by saying that he only encouraged Trump’s team explore available legal remedies and noting that he ultimately voted to certify the results on January 6, 2021. As reported by the AP:

Ally Isom has positioned herself as a conservative alternative to Lee, saying she agrees with his positions on most issues, yet disapproves of his uncompromising approach to governance

SALT LAKE CITY (AP) — Sen. Mike Lee faces his first test of 2022 in Utah’s Republican primary on Tuesday, where he’s being challenged by two well-funded opponents in a race that should offer insight into whether loyalty to former President Donald Trump remains a litmus test for Republican voters.

Former state lawmaker Becky Edwards and businesswoman Ally Isom — neither of whom voted for Trump — have spent months on the campaign trail framing Lee as a divisive politician who cares less about governing than he does television appearances and his allegiance to Trump.

The messages showed Lee discussing tactics to challenge the 2020 election result. The attorney-turned-senator first encouraged Trump advisers to embrace conspiracy theorist attorney Sidney Powell and later referenced his discussions with lawmakers in battleground states about appointing competing slates of electors to act contrary to the results.

Lee has responded to the texts by saying that he only encouraged Trump’s team explore available legal remedies and noting that he ultimately voted to certify the results on January 6, 2021.

Isom has positioned herself as a conservative alternative to Lee, saying she agrees with his positions on most issues, yet disapproves of his uncompromising approach to governance.

Edwards similarly disapproves of Lee’s approach but has also staked out more moderate positions on key issues; She’s rebuked Donald Trump for continuing to spread disproven claims of election fraud two years after the 2020 election and said she disagrees with the U.S. Supreme Court’s decision to revisit Roe v. Wade and abortion rights.

Lee has mostly remained above the fray and not responded to the intraparty attacks. He’s instead highlighted his steadfast support for conservative principles and focusing on tried-and-true rhetoric about the U.S. constitution and criticisms of federal overreach.

The heated primary is a marked difference from Lee’s first reelection campaign in 2016. That year, no primary challengers came forward to challenge him in arch-conservative Utah, after the one-time Tea Party insurgent successfully consolidated support from both grassroots conservatives and establishment Republicans.

Despite efforts from his opponents, Lee won 71% of the delegate vote at the state GOP’s April convention and remains overwhelmingly popular among party activists. But criticism may be growing among both Republican insiders and the party’s overall electorate. Many have publicly taken issue with his willingness to shut down the federal government and be the Senate’s lone “no vote” on proposed policies. For others, frustration reached a fever pitch after the leak of text messages between him and Trump’s chief of staff Mark Meadows showed his early involvements in efforts to overturn the 2020 election.

Lee has given few interviews on the text messages and both Isom and Edwards have said his explanations — and ultimate decision to vote to certify the results — have been insufficient.

“He told us his role was limited. He stood on the floor of the Senate to certify the vote and acted like nothing had happened. That’s deception,” Isom told reporters after a debate this month.

Utah is reliably conservative and voted for Republicans in every presidential election since 1964, but the fact that Lee faces a tougher battle than some other red state incumbents reflects how the state remains reluctant to embrace Trump-style conservative politics.

Lawmakers here have historically prided themselves for being consensus-minded and in 2016, then-candidate Trump received only 46% of the vote — a meager plurality thanks to the 22% of the electorate who instead backed Evan McMullin, a former Republican CIA operative running as an independent.

The race should test the extent to which criticisms of divisiveness and the increasingly polarized state of politics resonate in the state’s religion-infused political culture.

Two years ago, Lee shocked many members of the Church of Jesus Christ of Latter-day Saints when, at a rally, he compared Trump to a key figure in the Book of Mormon. Members of the faith make up a majority of Utah’s population and many were offended to hear a U.S. senator politicize parts of their sacred texts.

Though as the incumbent, Lee is the presumptive favorite in the primary, more significant challenges could lie ahead. The winner of the primary will in November take on McMullin, the former presidential candidate running as an independent. Utah’s Democratic Party in April chose to back him instead of putting forth a candidate from their own party, hoping that consolidating support from Democrats, independents and disillusioned Republicans could help unseat Lee.

By SAM METZ and LINDSAY WHITEHURST