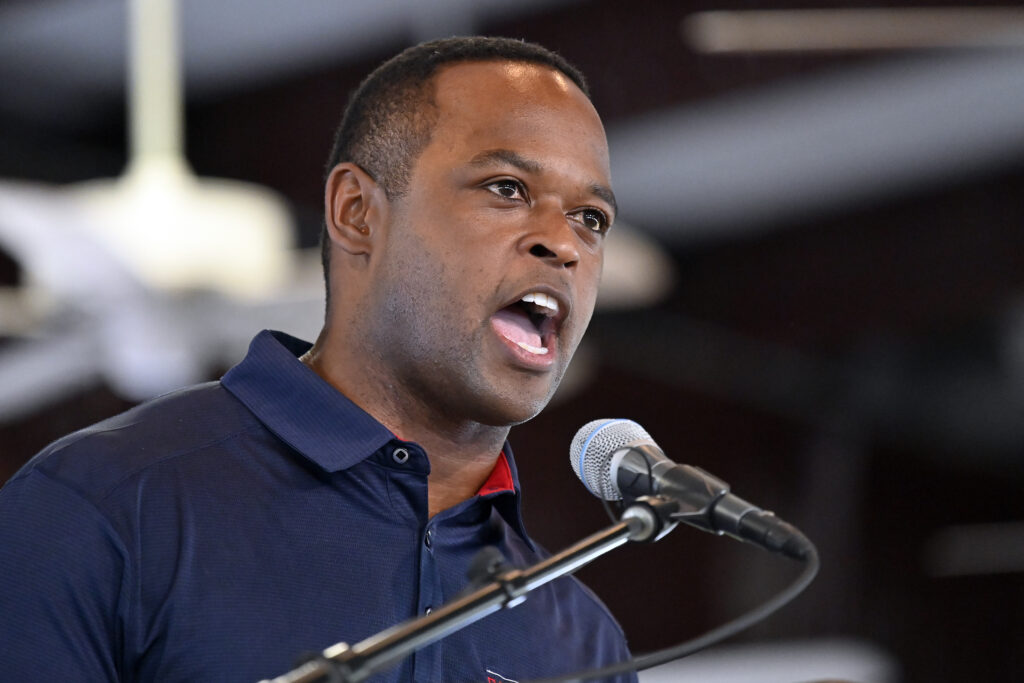 In wake of floods, typical barbs at Kentucky political event

While Kentucky Gov. Andy Beshear was consoling families displaced by historic flooding in the mountains of eastern Kentucky, Republicans at the state’s premier political event on the other side of the state were campaigning to oust him from office in 2023.

GOP candidates speaking at the Fancy Farm picnic in western Kentucky bashed the Democratic governor’s record earlier in this term, especially his handling of the COVID-19 pandemic. But they also offered support for recovery efforts that Beshear is leading in the wake of historic flooding and tornadoes.

While his challengers aimed zingers at him, Beshear spent the day meeting with families displaced by flash flooding that swamped the Appalachian region more than a week ago, killing 37. Beshear visited two state parks where some of the suddenly homeless took refuge.

“Today I’m at our state parks, spending time with our eastern Kentucky families who have been displaced from the catastrophic flooding,” Beshear posted on social media. “These Kentuckians have been through the unimaginable. My priority is being there for them.”

Last December, deadly tornadoes tore through parts of western Kentucky. The political speaking at the annual Fancy Farm picnic — the traditional start of the fall campaign in Kentucky — took place about 10 miles (16 kilometer) from Mayfield, which took a direct hit from a tornado.

Living up to the event’s reputation for edgy attacks, Republicans wanting to unseat Beshear took aim at restrictions that the governor imposed on businesses and gatherings in response to the COVID-19 pandemic. The governor has said his actions saved lives at a perilous time when vaccines were not available. The state’s GOP-dominated legislature reined in the governor’s virus policymaking power in a case settled by the state’s Supreme Court.

“Folks, just because we lived through a global pandemic doesn’t mean that our rights, our freedoms and liberties should be tossed out the window,” he added.

In his speech, Kentucky Democratic Party Chairman Colmon Elridge came to the defense of Beshear, who consistently receives strong approval ratings from Kentuckians in polls. Elridge praised Beshear’s efforts in leading recovery efforts in tornado-ravaged western Kentucky and said he’ll do the same for flood victims in the state’s Appalachian region.

“Once again, our governor is showing through his actions how we show up in moments of devastation and embrace our fellow Kentuckian, not as Democrats or Republicans, but as Kentuckians,” Elridge said.

The governor is highlighting his management of the state’s economy in asking voters for a second term. Kentucky has posted records for job creation and investments during his term and recently posted its lowest-ever unemployment rates.

Beshear was already a committed no-show for the state’s premiere political event. The governor initially planned a visit to Israel that coincided with the Fancy Farm picnic. He canceled that trip after the massive flooding hit eastern Kentucky.

The Fancy Farm stage was dominated by Republican officeholders — reflecting the GOP’s electoral dominance. The event is a rite of passage for statewide candidates, who are tested in stump-style speeches in the August heat while facing taunts and shouts from partisans from the other party.

The political attacks were punctuated by calls for continued public support for people rebuilding from tornadoes and facing the same daunting task in flood-ravaged areas.

“We might be sharing a few laughs today, but whether we’re Republican or Democrat, know that we are with you,” said GOP gubernatorial hopeful Daniel Cameron. “When natural disasters strike, we take off our partisan hats and we root for each other. We help repair and we help rebuild.”

Cameron then shifted into promoting his candidacy. He touted his endorsement from former President Donald Trump and his work as the state’s attorney general in defending Kentucky’s anti-abortion laws and fighting Biden administration policies in court.

“I am the best candidate and the only candidate that can beat Andy Beshear next fall,” Cameron said.

The still-emerging 2023 governor’s race already is overshadowing the state’s top-of-the-ticket race this year — the contest between Republican U.S. Sen. Rand Paul and Democratic challenger Charles Booker. Paul was unable to attend the picnic because of Senate duties.

Also missing from the political speaking Saturday was Kentucky’s most powerful Republican, Senate GOP leader Mitch McConnell. A picnic mainstay for decades, McConnell relishes the verbal combat but also missed the event because of Senate duties. In a Senate speech Saturday, McConnell said the federal role in the long recovery for flood-damaged areas in his home state will grow once the rebuilding begins.

“Soon I’ll visit the region myself to meet with flood victims and listen to their concerns,” McConnell said. “Then I’ll take what I hear from my constituents back to Washington and ensure we stand by their side as we rebuild bigger and better than before.”