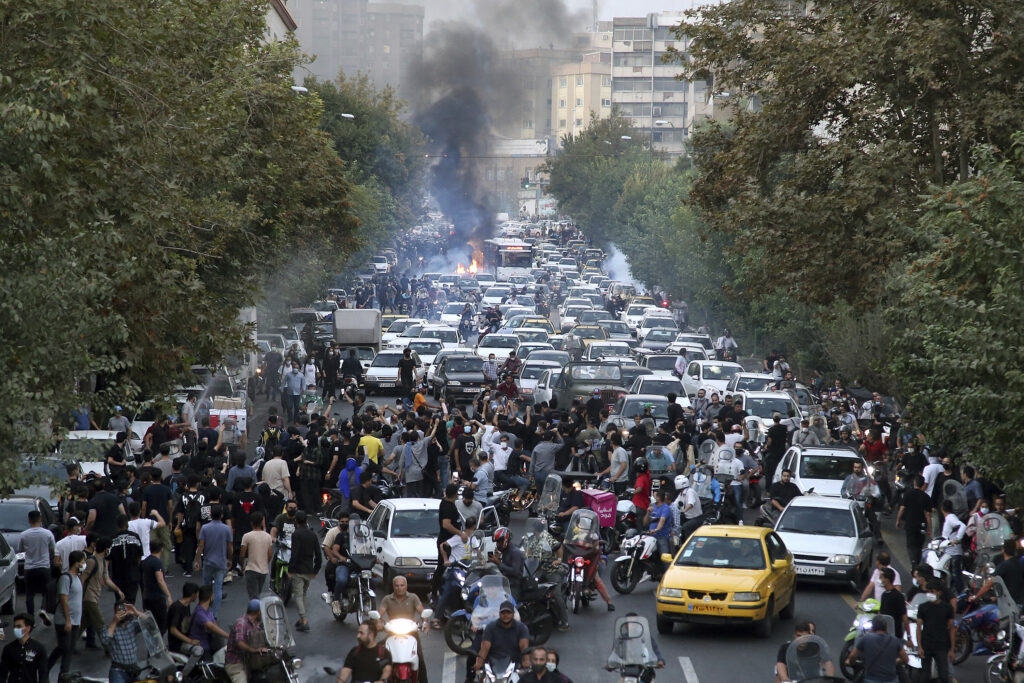 Iranians saw their access to Instagram, one of the few Western social media platforms still available in the country, disrupted on Wednesday following days of mass protests over the death of a woman who was detained by the morality police.

Mahsa Amini’s death in custody is fast becoming another moment of reckoning for the Iranian regime that fears a popular revolt more than it fears staring down the rest of the world.

Four days after Amini died in a Tehran hospital, protests in the Iranian capital show little sign of slowing. Most protests appear peaceful, but some in Kurdish areas of Iran have turned violent.

NetBlocks, a London-based group that monitors internet access, reported widespread disruptions. Witnesses inside Iran, who spoke on condition of anonymity out of security concerns, said they were unable to log on using mobile phones or home connections.

They also reported being unable to access the WhatsApp messaging service using Iranian mobile networks, though the service was still available via Wi-Fi. The extent of that outage was not immediately clear.

The disruption of those services would limit the ability of protesters to organize and share information. Both services are owned by Facebook parent Meta, which did not immediately respond to a request for comment.

There was no immediate confirmation from Iranian authorities. But earlier on Wednesday, Iran’s Telecommunications Minister Isa Zarepour was quoted by state media as saying that certain restrictions might be imposed “due to security issues,” without elaborating.

Iran already blocks Facebook, Telegram, Twitter and YouTube, even though top Iranian officials use public accounts on such platforms. Many Iranians get around the bans using virtual private networks, known as VPNs, and proxies.

In a separate development, several official websites, including those for the supreme leader, the president and the Central Bank, were taken down at least briefly as hackers claimed to have launched a cyberattack on state agencies.

The apparent cyberattack came amid days of protests over the death of 22-year-old Mahsa Amini, who was detained by the Iran’s morality police for allegedly wearing the mandatory Islamic headscarf too loosely. It also came hours before Iran’s President Ebrahim Raisi addressed the United Nations General Assembly.

Hackers linked to the shadowy Anonymous movement said they targeted other Iranian state agencies, including state TV and the office of the presidential spokesman.

Central Bank spokesman Mostafa Qamarivafa denied that the bank itself was hacked, saying only that the website was “inaccessible” because of an attack on a server that hosts it, in remarks carried by the official IRNA news agency. The website was later restored.

Amini’s death has sparked protests across the country, with many demonstrators clashing with police and chanting against the Islamic Republic itself.

The police say she died of a heart attack and was not mistreated, but her family has cast doubt on that account, saying she had no previous heart issues and that they were prevented from seeing her body.

The U.N. human rights office says the morality police have stepped up operations in recent months and resorted to more violent methods, including slapping women, beating them with batons and shoving them into police vehicles.

President Joe Biden, who also spoke at the U.N. General Assembly on Wednesday, voiced support for the protesters, saying “we stand with the brave citizens and the brave women of Iran, who right now are demonstrating to secure their basic rights.”

The U.K. also released a statement Wednesday calling for an investigation into Amini’s death and for Iran to “respect the right to peaceful assembly.”

Raisi has called for an investigation into Amini’s death. Iranian officials have blamed the protests on unnamed foreign countries that they say are trying to foment unrest.

Iran’s Supreme Leader Ayatollah Ali Khamenei made no reference to the protests in a meeting on Wednesday with veterans of the 1980s Iran-Iraq war.

Iran has been the target of several cyberattacks in recent years, many by hackers expressing criticism of its theocracy.

In February, dissident hackers put up an anti-government message on a website that streams state television programming. Last year, an online group released video footage from inside Iran’s notorious Evin prison that it claimed to have acquired through hacking.

Later that year, a cyberattack crippled gas stations across the country, creating long lines of angry motorists unable to get subsidized fuel for days. Messages accompanying the attack appeared to refer to Iran’s Supreme Leader Ayatollah Ali Khamenei. Other attacks, which Iran has blamed on Israel, have targeted its nuclear program and industrial sites.

Iran has also grappled with waves of protests in recent years, mainly over a long-running economic crisis exacerbated by Western sanctions linked to its nuclear program.

The Biden administration and European allies have been working to revive the 2015 Iran nuclear accord, in which Iran curbed its nuclear activities in exchange for sanctions relief, but the talks have been deadlocked for months.

In his speech at the U.N., Raisi said Iran is committed to reviving the nuclear agreement but questioned whether it could trust America’s commitment to any accord.

Iran insists its nuclear program is for peaceful purposes. It began ramping up its nuclear activities after then-President Donald Trump unilaterally withdrew from the 2015 agreement, and experts say it now likely has enough highly-enriched uranium to make a bomb if it chooses to do so.