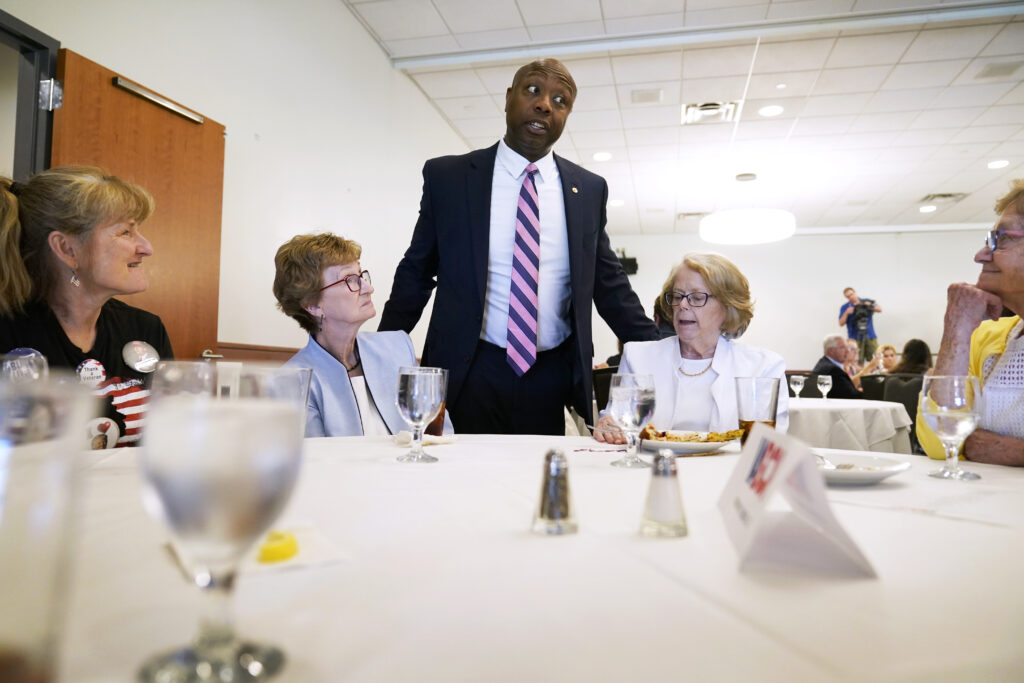 While potential presidential candidates have dipped into Iowa for more than a year, the next round of visits marks a new phase of the White House run ritual, as Iowa is the testbed for how well a candidate will do nationally. At least a half-dozen GOP presidential prospects are planning Iowa visits this summer, forays that are advertised as promoting candidates and the state Republican organization ahead of the fall midterms. As reported by the AP:

CEDAR RAPIDS, Iowa (AP) — The polls were closed in Iowa for less than 48 hours when South Carolina Sen. Tim Scott was shaking hands and posing for pictures with eastern Iowa Republicans at a Cedar Rapids country club last week.

Scott, one of the many Republicans testing their presidential ambitions, hardly has the state to himself.

At least a half-dozen GOP presidential prospects are planning Iowa visits this summer, forays that are advertised as promoting candidates and the state Republican organization ahead of the fall midterm elections. But in reality, the trips are about building relationships and learning the political geography in the state scheduled to launch the campaign for the party’s 2024 nomination.

While potential presidential candidates have dipped into Iowa for more than a year, the next round of visits marks a new phase of the ritual. With Iowa’s June 7 primary out of the way, Republicans eyeing the White House can step up their travel and not worry about stepping into the state’s intraparty rivalries.

Beyond Scott, former United Nations Ambassador Nikki Haley is expected to visit late this month and plans to campaign with as many Iowa congressional Republican candidates as she can in a little more than two days.

Haley, who is also the former governor of South Carolina, another early-voting state in the presidential calendar, plans to begin her trip in eastern Iowa on June 29 with first-term Rep. Mariannette Miller-Meeks. She’ll also headline a state GOP fundraiser in Dubuque.

Arkansas Sen. Tom Cotton, who visited several times in 2021, is expected the first week in July to speak at the county GOP dinner in Story County in central Iowa.

Former Secretary of State Mike Pompeo, who has visited Iowa more often than any GOP prospect, is working out details for a late summer return, aides said, likely timed to the Iowa State Fair in August, a storied draw for would-be candidates.

Pompeo did endorse Nunn before the primary, a nod to their shared military experience, Pompeo aides said.

The plans also come in light of the Republican National Committee’s unanimous decision in April to open the 2024 presidential selection sequence in Iowa, a question still hanging over Iowa Democrats.

In 2020, a smartphone app designed to calculate and report the Democratic caucuses results failed, prompting a telephone backlog that prevented the party from reporting final results for nearly a week after the Feb. 3 contest. The Associated Press announced it was unable to declare a winner after irregularities and inconsistencies marred the results.

Stripped of their automatic special status in April, Iowa Democrats are trying to salvage their leadoff spot with a plan to allow early participation by mail and streamline the sometimes-time-consuming process.

With Joe Biden in the White House, Democrats with White House ambitions have largely kept their distance from Iowa.

Sen. Bernie Sanders, the Vermont independent who won the 2016 caucuses and was the final candidate to drop from the 2020 Democratic contest, was in southeastern Iowa Friday to rally support for United Auto Workers striking at a CNH agricultural machinery plant. Sanders’ plans, which also included a stop in southeastern Wisconsin, sparked questions about whether the 80-year-old has a third White House bid in mind. He has said he wouldn’t challenge Biden if the president sought reelection, and Sanders advisers said there had been no stated changes in his plans.

On the GOP side, Scott’s return was not only timely. It reflected the dual aims of these early appearances, part introduction and part demonstration of support for the local party.

The 56-year-old sketched his childhood as one influenced by grandparents who helped raise him. Of his grandfather, Scott said, “For a guy who picked cotton in the 1920s, he lived long enough to watch me pick out a seat in the United States Congress.”

“It’s going to take us all pulling together,” he told a table of about 10 eating barbecue sandwiches, as he worked the dining room before the event.

Even before Scott’s arrival, former Vice President Mike Pence was on the phone that day to Chairman Kauffman and Steve Scheffler, Iowa’s Republican National Committeeman, to talk about the primaries and the summer ahead, they said.

Pence was planning a summer trip to Iowa, though the date was not yet confirmed, a senior aide to the former vice president said.

Notably missing from the Iowa travel schedule is Florida Gov. Ron DeSantis, among the most often mentioned rising national Republican figures in conversations with Iowa party activists this year. DeSantis’ priority is running for reelection this year, aides said.

“I love DeSantis,” said Emma Aquino-Nemecek, a Linn County Republican Central Committee member who attended the Tim Scott event. “Can you imagine if he comes? He would pack the place.”

DeSantis got within shouting distance of Iowa in September, when he helped headline a fundraiser for Nebraska Gov. Pete Ricketts, but he did not cross the Missouri River to touch Iowa soil.

Even more notably missing from the summer schedule so far is former President Donald Trump, who staged a massive rally in Des Moines last year at the Iowa state fairgrounds, and has endorsed several Iowa Republicans.

Kauffman said he had not heard from Trump’s team. Likewise, Iowa operatives for Trump did not return messages.

Still, Trump sent signals to Iowa Republicans by paying for print ads in the program circulated at the Iowa Republican Party’s state convention Saturday, as did Scott, Pompeo and Florida Sen. Rick Scott.

Gov. Brian Kemp won the GOP primary comfortably over David Perdue, whom the former president endorsed after Trump narrowly lost Georgia in the 2020 presidential election, claiming without evidence the results were invalid due to rampant voter fraud.

The speed bump for Trump’s influence in the primary elections could signal to other 2024 prospects that the former president is not invincible, Scheffler said.

“If Trump keeps making these endorsements and they go south, like he did in Georgia, who knows?” Scheffler said.