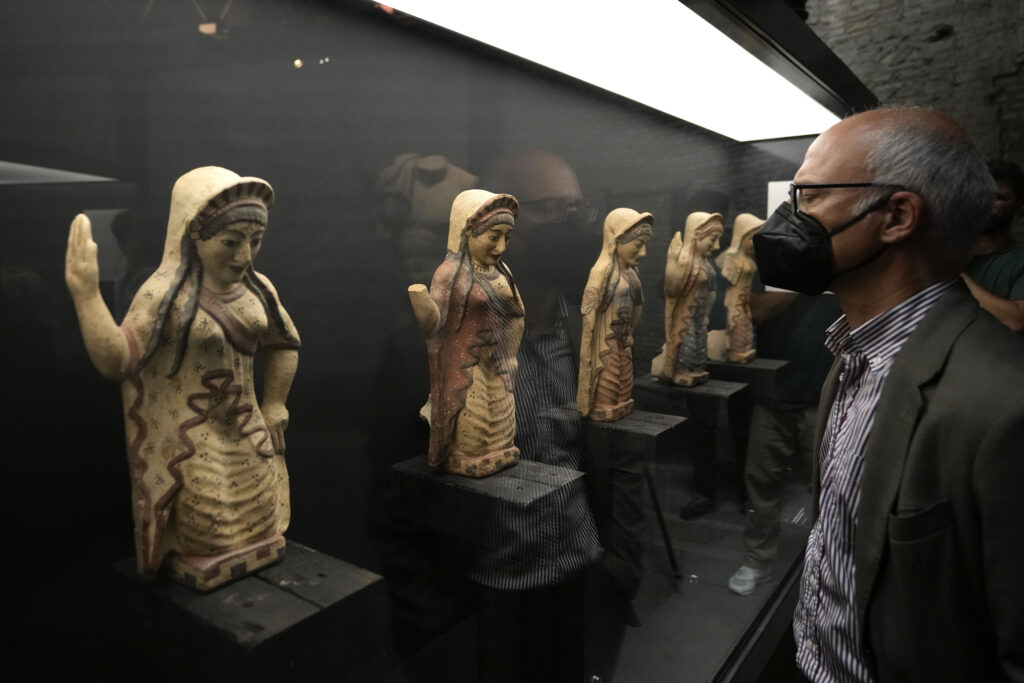 The Museum of Rescued Art in Italy was inaugurated Wednesday in a cavernous structure that is part of Rome’s ancient Baths of Diocletian. Exhibits in the new museum will change every few months as the objects on display return to what experts consider their territory of origin, many of them places that were part of ancient Etruscan or Magna Grecia civilizations. As reported by the AP:

ROME (AP) — Italy has been so successful in recovering ancient artworks and artifacts that were illegally exported from the country it has created a museum for them.

The Museum of Rescued Art was inaugurated Wednesday in a cavernous structure that is part of Rome’s ancient Baths of Diocletian. The Octagonal Hall exhibition space was designed to showcase Italy’s efforts, through patient diplomacy and court challenges, to get valuable antiquities returned to Italy, often after decades in foreign museums or private collections.

Exhibits in the new museum will change every few months as the objects on display return to what experts consider their territory of origin, many of them places that were part of ancient Etruscan or Magna Grecia civilizations in central or southern Italy.

The inaugural exhibit revolves around some 100 of 260 artifacts recovered by the nation’s paramilitary Carabinieri art squad from the United States and brought back to Italy in December 2021.

The pieces on display, which were found during clandestine digs and illegally exported, include exquisitely carved Etruscan figurines and imposing painted jars from several centuries B.C. The items previously were held by museums, auction houses and private collections.

The new Rome museum is exhibiting objects “never before seen in Italy,” said Massimo Osanna, director general of Italy’s state museums. In his previous role, Osanna had long been in charge of reviving the fortunes of Pompeii, the ancient Roman city near Naples, one of the world’s most famed archaeological sites that itself was heavily looted by antiquities bandits of past generations.

The recently recovered antiquities are from before the Roman era, dating back to the 8th to 7th centuries B.C. Many of them came from the area near modern-day Cerveteri, which is awash with remnants of the flourishing Etruscan civilization in west-central Italy.

One particularly striking piece is a ceramic jar, painted red on white and towering more than a meter (40 inches) high. Decorated with images of horses and cats, it depicts the mythological scene of the blinding of Polyphemus, a man-eating one-eyed creature.

The choice of the jar’s decoration probably indicates that the Etruscan elite were bilingual and “fascinated with Greek myth,” Osanna told The Associated Press in an interview. They were “Etruscan heroes that identified with Greek heroes,” he said.

Italian Culture Minister Dario Franceschini explained the decision to opt for a series of rotating exhibits in the new museum instead of establishing a permanent collection of rescued art.

“We thought it’s right to have the pieces return to the places where they were stolen from,” Franceschini said.

In some cases, experts don’t know the exact original location of the antiquities, underlining the irreparable damage done when archaeological treasures are clandestinely snatched away. Pieces with unknown origins will be returned to the general geographic area.

The exhibition space is part of the National Roman Museum. Its current exhibit runs until October 15, then the museum will display a different batch of recovered antiquities.