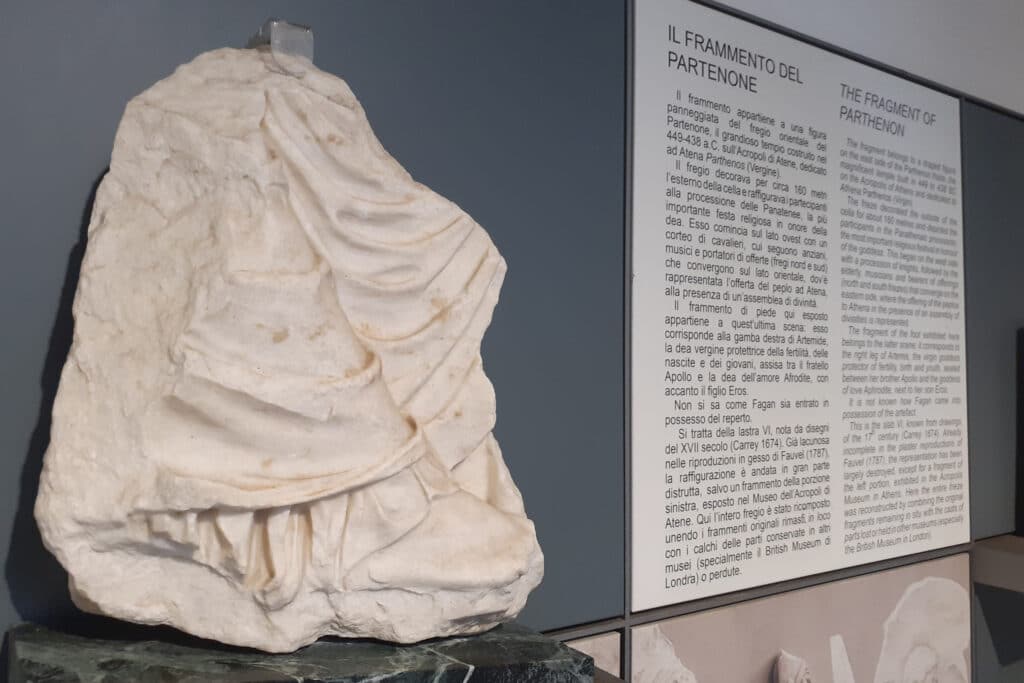 Many in Greece would like to see pieces of their history returned to their rightful place, and Italy is leading the way, hoping to set an example for other European nations, mostly Great Britain, to do the same. Sicily’s regional archaeological museum said it had signed an agreement with the Acropolis Museum in Athens for a once-renewable, four-year loan of the small white marble piece. As reported by the AP:

About half the surviving 5th century B.C. sculptures that decorated the Parthenon temple on the Acropolis are in the British Museum in London

ROME (AP) — An Italian museum is lending a fragment of the Parthenon Sculptures to Greece, in what both sides hope will become a permanent return that might encourage others — the British Museum, in particular — to send their own pieces of the works back, too.

Italy’s regional archaeological museum in Sicily, said Wednesday it had signed an agreement with the Acropolis Museum in Athens for a once-renewable, four-year loan of the small white marble piece it has, in exchange for a loan of a statue and vase. But the ultimate aim, Sicily’s A. Salinas Archaeological Museum said in a statement, is the “indefinite return” of the fragment to Athens.

About half the surviving 5th century B.C. sculptures that decorated the Parthenon temple on the Acropolis are in the British Museum in London, which has long resisted Greek appeals for their return. But small fragments are also held in other European museums.

“The return to Athens of this important artefact of the Parthenon goes in the direction of building a Europe of culture that has its roots in our history and in our identity,” said Sicily’s councilor for cultural heritage and identity, Alberto Samonà.

The piece is the right foot of a draped figure of Artemis, the Greek goddess of the hunt, originally located on the eastern side of a 160-meter (520-foot) sculpted frieze that ran around the temple. It came to Palermo by way of a 19th century English consul in Sicily, Robert Fagan, though it remains unknown how he acquired it. After Fagan died, his widow sold the fragment to the University of Palermo’s Regio museum, which became the A. Salinas regional museum, the statement said.

The statement quoted Greek authorities as praising the initiative in the hope that it encourages the British Museum to return its sculptures, which were taken from the Parthenon by Lord Elgin, the British ambassador to the Ottoman Empire, in the early 19th century.

The sculptures — 17 figures from the building’s pediments and part of the frieze — have been the subject of a long dispute between Britain and Greece, which has renewed its bid to bring the marbles home.

Britain maintains that Elgin acquired the sculptures legally when Greece was ruled by the Ottomans. The Greek government says they were stolen and wants them returned for display in the Acropolis Museum that opened in 2009.

Italy’s fragment has been loaned to Athens in the past, but for short periods of time. Sicily’s regional authorities have initiated talks with the Culture Ministry to make the loan permanent, putting it on the agenda of a ministry committee that handles such returns, the statement said.

Italy has been at the forefront of international efforts to recover antiquities that were looted from its territory and ended up in museums and private collections around the world. It has also been on the returning end of the restitution market when it finds antiquities or artworks that were illegally brought into the country.

In exchange for receiving the foot fragment, the Acropolis museum is loaning the Palermo museum a 5th century B.C., marble statue of Athena and a terracotta amphora in the linear, geometric style that dates from the mid-8th century B.C., according to the statement.