Italy’s Meloni visits EU: “We are not Martians” 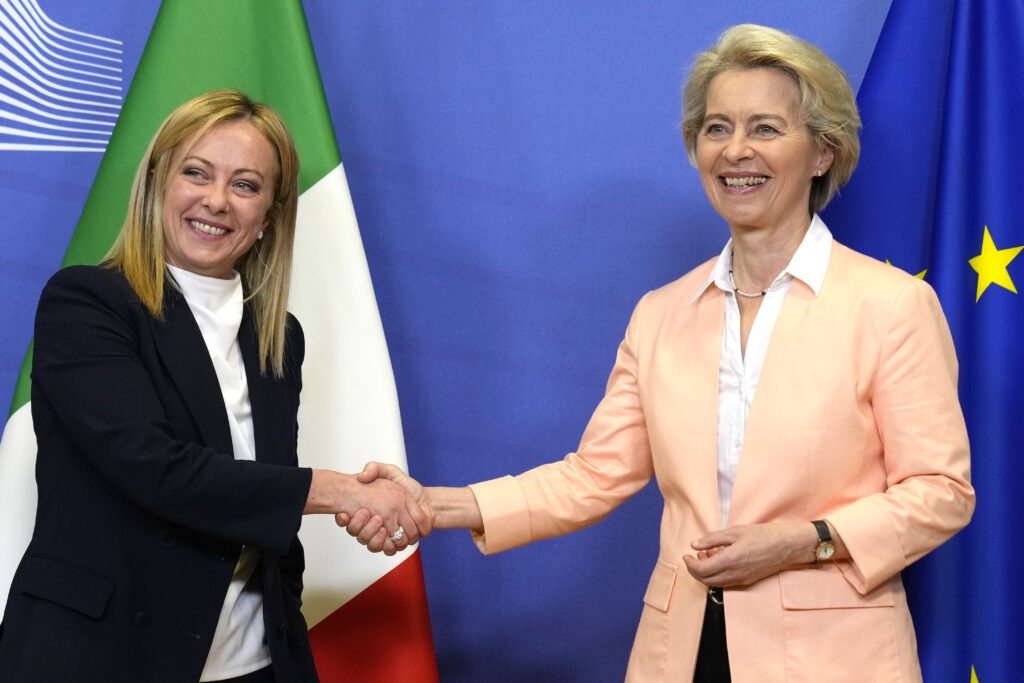 Italy’s Meloni visits EU: “We are not Martians”

New far-right Italian Premier Giorgia Meloni used her first visit to European Union headquarters in Brussels Thursday to declare that Italy will be a force to reckon with in EU affairs, leaving it unclear whether that was a promise or a threat from one of the bloc’s powerful founding members.

Her first foreign trip after brokering Italy’s only far-right-led government since World War II was not the ordinary kind of visit by a new leader of a major EU nation seeking to renew unshakable bonds with the 27-nation bloc.

For some, it brought the far right into the walls of the EU just as the bloc faces crises on many fronts.

Meloni said she had found her counterparts receptive and described the talks as “frank and very positive.”

“I am happy with the climate I found here in Brussels. Probably to be able to see and speak with people can help dismantle a narrative about yours truly,” Meloni told reporters. “We are not Martians. We are people in flesh and bone who explain our positions.”

She said they discussed the war in Ukraine, the resulting soaring prices for energy and raw materials as well as the heavy migration that Italy shoulders at the EU’s southern border.

Meloni’s Brothers of Italy party has neo-fascist roots and she has governed since Oct. 22 along with anti-migrant League party leader Matteo Salvini and former Conservative Premier Silvio Berlusconi, who only recently vaunted his connections to his friend Russian President Vladimir Putin.

It’s enough to send shivers down the spine of many EU legislators and officials, who fear the rule of law and revered principles of Western liberal democracy could be hollowed out from within as yet another EU nation turns sharply to the right.

Metsola sidestepped the political differences and centered on the common challenges ahead.

“I am aware that member states have different realities, but we must find the courage and political will to act as we did during the pandemic, by joining forces,” said Metsola after the meeting.

Many, though, are wary of working too closely with Meloni and her far-right-led ruling coalition.

On the eve of her visit, her government had to defend a decree banning rave parties against criticism it could be used to clamp down on protests, while it took no action against a neo-fascist march to the crypt of Italy’s late dictator Benito Mussolini.

Meloni has been dogged by critics who say she hasn’t unambiguously condemned fascism. The Brothers of Italy, which she co-founded in 2012, has its roots in a far-right party founded by nostalgists for Mussolini. She has retorted that she has “never felt sympathy or closeness for any non-democratic regime, including fascism.”

When it comes to the EU, Meloni is expected to criticize the bloc as being overly meddling in national affairs on anything from LGBTQ rights to local economies and too lax on migration.

Similar criticism has been heard in Poland and Hungary. For years, Hungarian Prime Minister Viktor Orban, a proponent of “illiberalism,” has increasingly run an obstructionist course in an EU where many major decisions have to be made unanimously.

Meloni has stressed, though, that she doesn’t want to torpedo the bloc, whose founding treaty was signed in Rome in 1957.

Italy isn’t in a strong position to break ranks with the EU or the shared euro currency. Its overall debt exceeds 150% of gross domestic product and it’s in line to get around 200 billion euros in aid to deal with the economic crisis caused by the pandemic. This offers the EU institutions extensive political leverage.

On EU foreign policy, which has become a much more trans-Atlantic endeavor with the United States since Russia invaded Ukraine, Meloni has had to overcome suspicions that her coalition could be leaning too far towards Putin.

When Berlusconi boasted to his Forza Italia lawmakers last month of having reestablished contact with Putin and exchanged birthday gifts, Meloni immediately put her foot down.

“Italy will never be the weak link of the West with us in government,” Meloni said.

Meloni has firmly backed Ukraine in its struggle against Russia’s invasion.