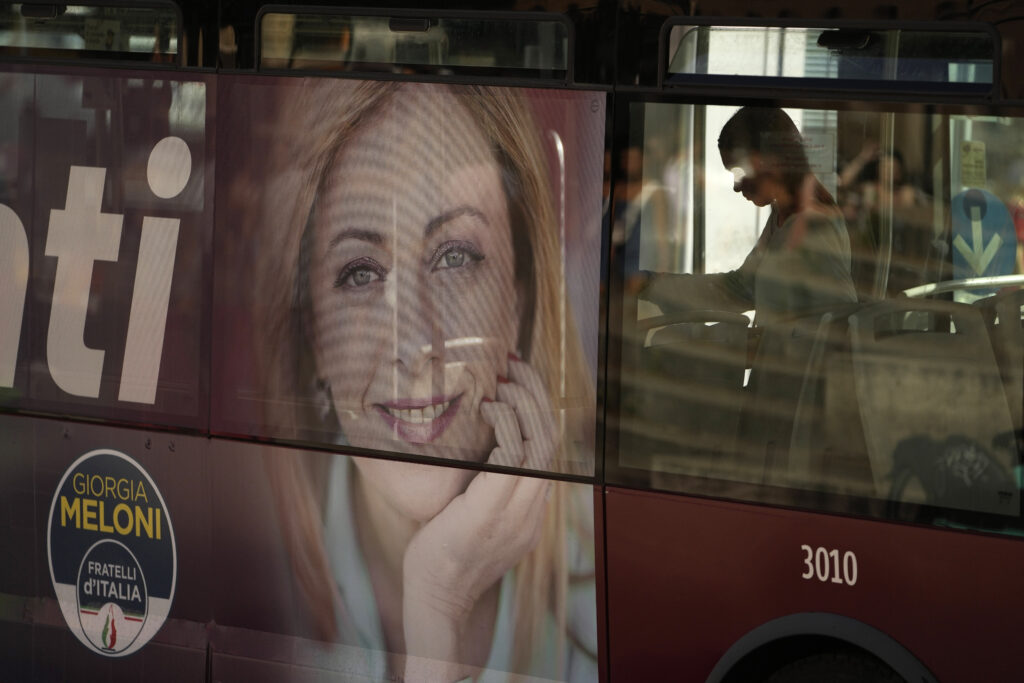 Italians will vote on Sunday in what is being billed as a crucial election as Europe reels from repercussions of Russia’s war in Ukraine. For the first time in Italy since the end of World War II, the election could propel a far-right leader into the premiership.

Soaring energy costs and quickly climbing prices for staples like bread — the consequences of Russia’s invasion of breadbasket Ukraine — have pummeled many Italian families and businesses.

Against that bleak backdrop, Giorgia Meloni and her Brothers of Italy party — with neo-fascist roots and an agenda of God, homeland and Christian identity — appear to be the front-runners in Italy’s parliamentary election.

They could be a test case for whether hard-right sentiment is gaining more traction in the 27-nation European Union. Recently, a right-wing party in Sweden surged in popularity by capitalizing on peoples’ fears about crime.

“Elections in the middle of a war, in the midst of an energy crisis and the dawn of what is likely to be an economic crisis … almost by definition are crucial elections,” said Nathalie Tocci, director of Rome-based think tank the International Affairs Institute.

Russian President Vladimir Putin, who ordered Moscow’s invasion of Ukraine on Feb. 24, is gambling that “Europe will break” under the weight of economic and energy problems brought on by the war, Tocci told The Associated Press.

Salvini, who draws his voter base from business owners in Italy’s north, has donned pro-Putin T-shirts in the past. Salvini has also questioned the wisdom of maintaining Western economic sanctions against Russia, saying they could hurt Italy’s economic interests too much.

The publication of polls was halted 15 days before Sunday’s vote, but before then they indicated Meloni’s party would be the biggest vote-getter, just ahead of the center-left Democratic Party headed by former Premier Enrico Letta.

A campaign alliance linking Meloni to conservative allies Salvini and former Premier Silvio Berlusconi confers a clear advantage over Letta under Italy’s complex system of divvying up seats in Parliament.

Letta had hoped in vain for a campaign alliance with the left-leaning populist 5-Star Movement, the largest party in the outgoing legislature.

While it is a fraught moment for Europe, Sunday’s election could see modern Italy’s lowest-ever turnout. The last election, in 2018, saw record-low turnout of 73%. Pollster Lorenzo Pregliasco says this time the percentage could drop to as low as 66%.

Pregliasco, who heads the YouTrend polling company, says Italy’s last three different governing coalitions since the last election have left Italians “disaffected, disappointed. They don’t see their vote as something that matters.”

In what Pregliasco called an “apparent paradox,” polls indicate that “most Italians like Draghi and think his government did a good job.” Yet Meloni, the sole major party leader to refuse to join Draghi’s coalition, is polling the strongest.

As Tocci put it, Meloni’s party is so popular “simply because it’s the new kid on the block.”

Draghi has said he doesn’t want another term.

To Meloni’s annoyance, criticism still dogs her that she hasn’t made an unambiguous break with her party’s roots in a neo-fascist movement founded by nostalgists for dictator Benito Mussolini after his regime’s disastrous role in World War II. During the campaign, she declared that she is “no danger to democracy.”

Some political analysts say worries about the fascist question aren’t their main concern.

“I am afraid of incompetence, not the fascist threat,″ said Roberto D’Alimonte, a political science professor at LUISS, a private university in Rome. ”She has not governed anything.”

Meloni served as youth minister in Berlusconi’s last government, which ended a decade ago.

Instead, her main right-wing coalition partner is worth worrying about, D’Alimonte told The AP.

But recent incidents have fed worries about Brothers of Italy.

A Brothers of Italy candidate in Sicily was suspended by his party after he posted phrases on social media showing appreciation for Hitler. Separately, a brother of one of Meloni’s co-founders was spotted giving what appeared to be the fascist salute at a funeral for a relative. The brother denied that was what he was doing.

For years, the right wing has crusaded against unbridled immigration, after hundreds of thousands of migrants reached Italy’s shores aboard smugglers’ boats or vessels that rescued them in the Mediterranean Sea. Both Meloni and Salvini have thundered against what they see as an invasion of foreigners not sharing what they call Italy’s “Christian” character.

Letta, who wants to facilitate citizenship for children of legal immigrants, has, too, played the fear card. In his party’s campaign, ads on buses, half the image depicts a serious-looking Letta with his one-word motto, “Choose,” with the other half featuring an ominous-looking image of Putin. Salvini and Berlusconi have both expressed admiration for the Russian leader. Meloni backs supplying arms so Ukraine can defend itself.

With energy bills as much as 10 times higher than a year ago, how to save workers’ jobs ranks high among Italian voters’ worries.

But perhaps with the exception of Salvini, who wants to revisit Italy’s closed nuclear power plants, candidates haven’t distinguished themselves in proposing solutions to the energy crisis. Nearly all are pushing for a EU cap on gas prices.

The perils of climate change haven’t loomed large in the Italian campaign. Italy’s tiny Greens party, a campaign partner of Letta, is forecast to capture barely a few seats in Parliament.