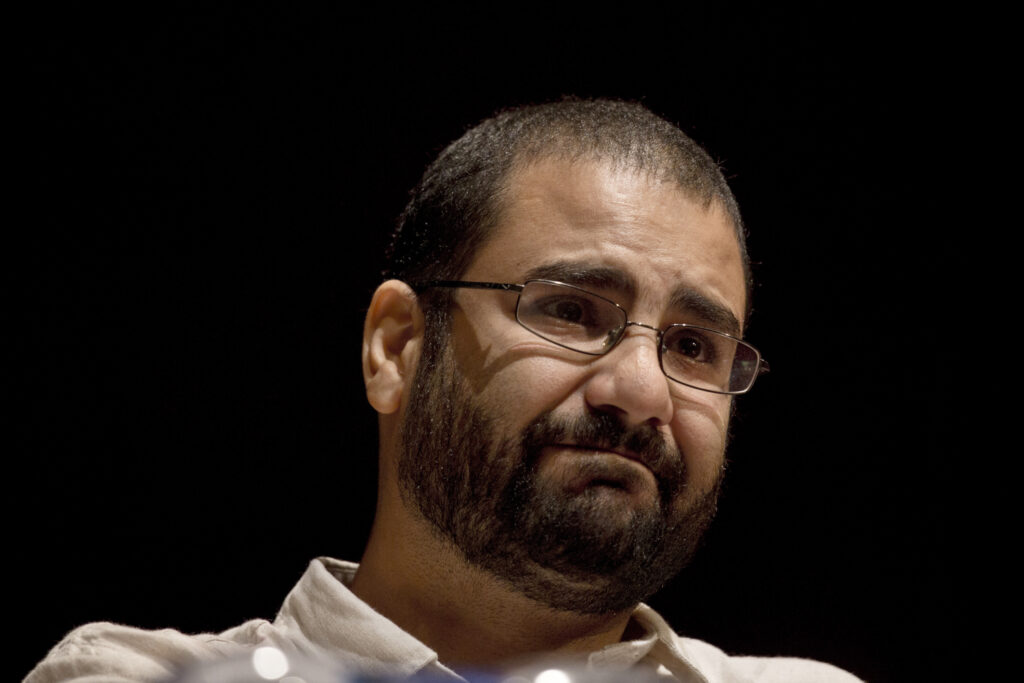 The family of one of Egypt’s top jailed pro-democracy activists warn that the clock is ticking on his life as they plead with world leaders at the U.N. climate conference to press Egypt for his release.

Alaa Abdel-Fattah — who has spent most of the past decade in prison because of his criticism of its rulers and last year was sentenced to five more years over a retweet — escalated a months-long hunger strike. He completely halted all intake of calories, then stopped drinking water Sunday, the conference’s first day.

Sanaa Seif, his youngest sister, said Tuesday that the family fears the Egyptian government could resort to force feeding her brother to keep him alive to avoid the embarrassment of him dying while the country is under the international spotlight.

“Force feeding is torture. Nothing should happen against his will as long as he’s able to say to say so,” she told The Associated Press on the sidelines of the conference in the seaside resort of Sharm el-Sheikh.

Seif, who has been imprisoned in Egypt for her activism in the past as well and now lives in Britain, came to Sharm el-Sheikh to raise her brother’s case, speaking to international media and other activists. Amnesty International warned that he could die within days if not freed.

The family has been pressing the British government to win Abdel-Fattah’s release and bring him back to the U.K., where he also has citizenship. In a letter to his family announcing his water strike, Abdel-Fattah said he was convinced the Egyptian government doesn’t intend to free him and that the spotlight of the conference was the only opportunity to force his case — and that he was willing to die if not freed.

“I want to be here as a reminder to them (world leaders) that there is this man dying over there and you’re all complicit. And you will have blood on your hands. And that’s why I’m here,” Seif said.

Abdel-Fattah rose to prominence with decades of pro-democracy activism, particularly in the 2011 uprisings that toppled Egyptian President Hosni Mubarak and swept elsewhere in the Mideast.

To many, his imprisonment was another sign of Egypt’s return to autocratic rule under President Abdel Fattah el-Sissi, a close ally to many Western governments. Since 2013, el-Sissi’s government has waged a fierce crackdown on dissent, arresting thousands and imposing tight restrictions on independent groups and the media.

Days before the climate conference began, another jailed activist, Alaa al-Salmi, died in prison after being on a hunger strike for two months, his family said. Rights groups say poor conditions and abuses are rife in Egypt’s prisons and many have died in custody.

Abdel-Fattah has been jailed repeatedly under different governments for lobbying for civil rights. After el-Sissi’s government virtually banned protests, he served a five-year prison sentence on charges of taking part in an unauthorized protest and allegedly assaulting a police officer.

He was released in 2019 but within a few months, he was arrested again after he retweeted news about another prisoner’s death. At the time, authorities were arresting dozens of activists after a rare outbreak of anti-government protests — though most, like Abdel-Fattah, were not involved. In December, he was convicted on charges of spreading false news and sentenced to five more years in prison.

For the second day Tuesday, his mother, Laila Soueif, went to the prison where his son is held to obtain proof that he is still alive. On Monday, she waited for many hours outside the prison for a letter from Abdel-Fattah, but she was told that he refused to write one.

Returning was a risk for Seif as well. During her last visit to Cairo, security officers stopped her for hours at the airport before allowing her entry. She said she was not stopped when she arrived in Sharm el-Sheikh on Monday and has not been harassed. She said she could see she was being followed.

“I stopped making these calculations … because when you’re not left with many choices you really have nothing to lose. And this is where the Egyptian regime has put us,” she said.

At a press conference she gave Tuesday, a pro-government Egyptian lawmaker tried to disrupt things, taking the microphone and shouting that her brother was a criminal not a political prisoner and that she was inciting foreign governments against Egypt. U.N. security removed him from the room.

Hossam Bahgat, a leading Egyptian rights defender and the executive director of the Egyptian Initiative for Personal Rights, called for all participants in the COP27 to highlight what he described as “a full-scale human rights crisis” in Egypt.

“We are asking them to join us in our demands for the Egyptian government to accelerate the release of political prisoners and save the life of the Alaa Abdel-Fattah and release him,” he said.

Western governments have long been reluctant to put heavy pressure on el-Sissi’s government over human rights and their officials often contend that behind-the-scenes negotiation is more effective on prisoner releases.

Macron said that el-Sissi told him in their meeting that he was committed to ensuring that “his health be preserved.”

“I’m telling it with much caution, I hope that the coming weeks and months will bring results,” said the French president.

Speaking to the U.S. news channel CNBC, Shukry said Abdel-Fattah would be provided “the health care that is available to all inmates.” He said that the hunger and water strike was “a matter of a personal choice” and suggested it might not be real. He also suggested the Egyptian government doesn’t officially recognize his U.K. citizenship.

“The solution is very, very simple: either put him on a plane to London or give him consular access. Allow the British embassy to see him,” she said. “I don’t trust the prison authorities.”

She doesn’t think about the worst scenario: The death of her brother.

“It is not over until it is over. As long as he is still breathing alive, then there is room to save him. And that’s the only thing in my mind,” she said.