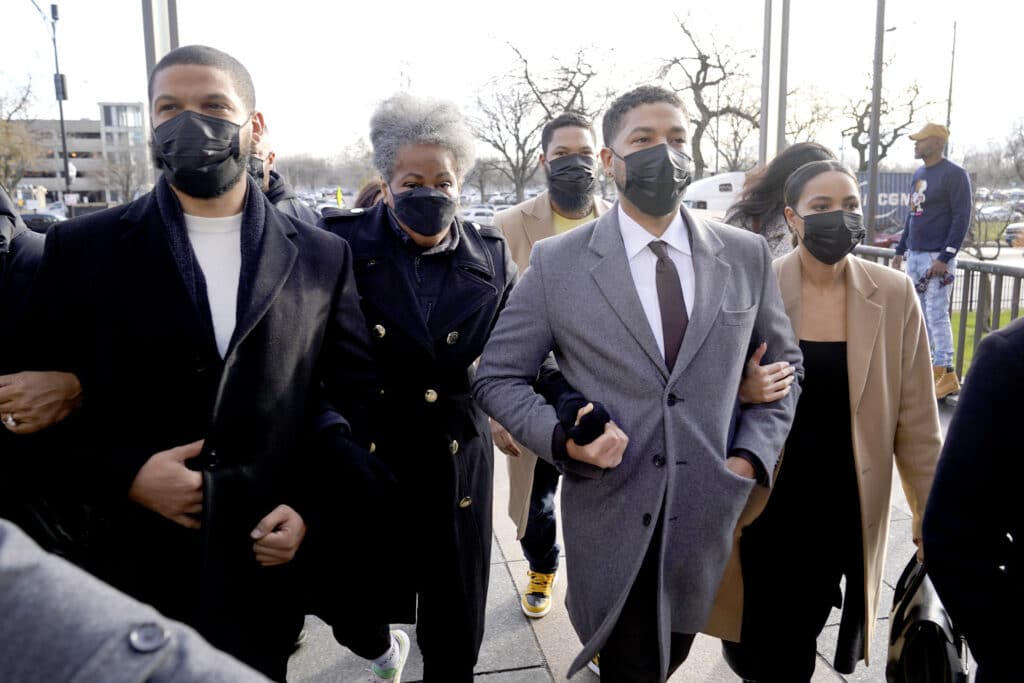 A lawyer for Jussie Smollett, who is being prosecuted for faking a hate crime, said in court that the two brothers Smollett hired to do the attack were lying and just wanted to make money off the incident. He also accused them of disliking Smollett because he is gay. The Associated Press has the story:

CHICAGO (AP) — Jussie Smollett’s lawyer suggested Thursday that an aspiring actor and his brother committed an anti-gay, racist attack against the former “Empire” actor because they didn’t like him, then tried to get him to pay them each $1 million not to testify that he staged the assault.

Defense attorney Shay Allen worked to cast doubt on Abimbola Osundairo’s earlier testimony that Smollett recruited him and his brother to stage a fake attack — instructing them on what to do and paying $3,500 to carry it out — because he wanted the publicity.

Allen suggested instead that the 2019 attack downtown Chicago was real, and that the brothers were motivated to accuse Smollett of staging the hoax because of their dislike of the performer — who is gay and Black — and then saw an opportunity make money.

He asked Osundairo, who worked as a stand-in on the Chicago set of “Empire,” if he tried to get a $5,000-per-week job as Smollett’s security and if after he was questioned by police and released he told Smollett he and his brother wouldn’t testify at his trial if they were each paid $1 million. Osundairo responded “No sir” to both.

Allen also questioned why Smollett would ask Osundairo and his brother to wait around for him outside at 2 a.m. in January, when temperatures were well below freezing and why they would do so.

“You really wanted to carry out this attack,” Allen said.

In follow-up questioning by prosecutor Dan Webb, Osundairo said he never thought Smollett would go to the police to report the fake attack as a real hate crime. He said Smollett told him that he wanted to use the fake attack to generate media attention, and that he has never lied to Chicago police.

Smollett, 39, is charged with six counts of felony disorderly conduct for making what prosecutors say was a false police report about the alleged attack — one count for each time he gave a report — to three different officers. The class 4 felony carries a prison sentence of up to three years, but experts have said if Smollett is convicted he likely would be placed on probation and ordered to perform community service.

Smollett’s legal team needs to cast doubt on Osundairo’s damaging testimony from Wednesday, but it isn’t easy. Osundairo stuck with his story Thursday, while also denying he had a sexual relationship with Smollett or that he asked the actor to hire him. And much of what Osundairo told jurors about the events of Jan. 29, 2019, appears to be corroborated by video and other evidence.

Osundairo testified that Smollett instructed him and his brother on how to carry out the staged attack. Smollett also planned a “dry run” and gave him a $100 bill to buy supplies, Osundairo said.

Osundairo said he and his brother agreed because he felt indebted to Smollett for helping him with his acting career.

Osundairo testified that he and his brother had difficulty identifying a good spot for the staged attack, walking around in the early morning of that Jan. 29 in weather that Osundairo described as “colder than penguin feet.”

According to Osundario, when the brothers spotted Smollett at around 2 a.m., Osundairo — as instructed earlier by Smollett — shouted a homophobic slur and his brother yelled, “this is MAGA country,” an apparent reference to then-President Donald Trump’s slogan “Make America Great Again.”

After punching Smollett in the face and throwing the actor to the ground, they put a noose around his neck and threw bleach on him, then ran away, Osundairo told jurors.

The next morning, as news broke of a hate crime against Smollett, Osundairo said he texted a note of condolence to Smollett, also as instructed. It read: “Bruh, say it ain’t true. I’m praying for speedy recovery.”

Osundairo testified that Smollett gave him a check for $3,500 and wrote on it that it was for a nutrition and workout program. But Osundairo said the money was both for the program and for helping to stage the attack.

A defense attorney told jurors during openings that Smollett was a “real victim” and that the brothers’ accounts are unreliable.

Before that night, Osundairo said Smollett sent him a text message asking to meet up “on the low,” which he took to mean a secret meeting. Osundairo said it was then that Smollett first asked him “to fake beat him up” and asked if his brother could help. Osundairo said he was “confused” and “puzzled” by the request.

Smollett said a camera in the area would record the attack, and that he wanted to use the recording for media purposes, Osundairo testified.

Also Wednesday, Chicago police detective Kimberly Murray, who interviewed Smollett the morning of the attack, said he told her he had received a threatening phone call days earlier, but he refused to hand over his cellphone, which the detective said could help police piece together a timeline. She said Smollett also wouldn’t consent to giving medical records or a DNA swab.

Murray said Smollett told her he had been assaulted by two men — one white and wearing a ski mask, the other he couldn’t see — as he returned home after buying a sandwich.

A lead investigator in the case testified Tuesday that police tracked down the Osundairo brothers, who are Black, using surveillance video and taxi and ride-share records. When taken into custody, the siblings detailed for police how Smollett orchestrated the fake attack.

Detective Robert Graves, who interviewed Smollett after the brothers had been arrested, said Smollett then started to change his story. Smollett told Graves that the attacker had “pale skin,” when he previously said the attacker was white.

Graves also told Smollett that the brothers were in custody for the hate crime.

“He said, ‘It can’t be them, they’re Black as sin,’” Graves recounted, saying he took that to mean the brothers have very dark skin.

Smollett later sent one of the brothers a text message, Graves said.

“I know 1000% you and your brother did nothing wrong and never would,” the text read.

Graves said he concluded Smollett had lied to him.

Defense attorney Nenye Uche has said the brothers attacked Smollett, who is Black and gay, “because of who he is” and has suggested that the brothers were homophobic.

Previous Article
Another Trump official held in contempt by Jan. 6 panel
Next Article
Delta variant still wreaking havoc in US