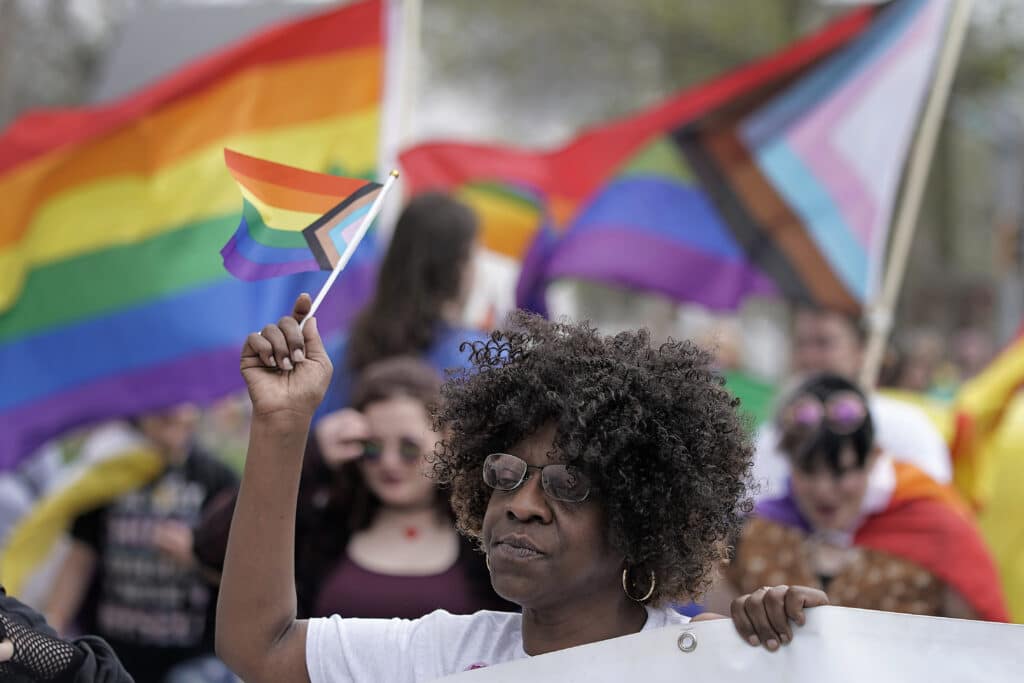 Kansas task force that city leaders said was designed to make the community more welcoming to people from diverse backgrounds, after George Floyd death. One of the most common results has been formalizing changes that had already been made, such as “no-knock” warrants, which have been proven to put police lives in danger. As reported by the AP:

TOPEKA, Kan. (AP) — First she saw the graphic cellphone video showing Ahmaud Arbery’s shooting death in Georgia, then news that Breonna Taylor had been shot in her Kentucky home during a botched drug raid. But when Teresa Parks watched videos of the white Minneapolis police officer pressing his knee onto a Black man’s neck and heard George Floyd cry out for his mother as his life drained away, she was spurred not just to tears, but also to action.

After Floyd’s May 2020 death, Parks and a friend formed a Black Lives Matter group in their hometown of Manhattan, Kansas, a largely white city that had elected no Black leaders since 1969. Parks’ activism led to her appointment to a task force that city leaders said was designed to make the community more welcoming to people from diverse backgrounds.

That task force issued a report in December 2021 with more than 60 recommendations, but so far, the city commission hasn’t discussed them. And that’s not unusual. All over Kansas, elected leaders convened task forces or held town hall meetings to gather community input on racial justice and diversity issues after demonstrators in more than a dozen communities protested Floyd’s death. But almost two years later, the passion and energy evident in those protests hasn’t translated into widespread change.

One of the most common results has been formalizing changes that had already been made. Topeka and Lawrence police banned “no-knock” search warrants, for example, but police in both cities had already discontinued the practice. In several Kansas cities including Wichita and Kansas City, police have put into writing the practices they said they had already adopted.

Lauren Bonds, the legal director for a New Orleans-based group of lawyers, legal workers and law students called the National Police Accountability Project, said local leaders sometimes form working groups when they want to appear to be on the right side of an issue but lack the political will to make real change.

“You’ll put some people of color on it, and then you’ll be able to point to that when someone says you didn’t respond to this egregious situation, but then you don’t actually have to change anything,” said Bonds, who is based in Kansas City, Kansas.

The Hispanic population in Kansas has more than quadrupled over the last 30 years, largely because of immigrants attracted to jobs in the meatpacking industry in the southwest of the state, and the Black population grew 15% between 1990 and 2020. But Kansas remains largely white and non-Hispanic; 72% of residents self-identified as such in the 2020 census and the Kansas Legislature was 92% white that year according to the National Conference of State Legislatures.

Proposals pushed by advocacy groups on behalf of racial justice in Kansas typically stall. After the Floyd protests, for example, Democratic Gov. Laura Kelly appointed a committee on racial equity and justice, saying “communities of color do not have the luxury of time for leaders to address these issues.” But neither the panel nor the governor pushed the Legislature to adopt the group’s recommendations.

And this year, the momentum in the Republican-controlled Legislature swung away from racial justice toward limiting what public schools teach about racism and tightening voting laws.

Kevin Willmott, a University of Kansas film professor who in 2019 won the best adapted screenplay Oscar for “BlacKkKlansman,” said that when elected officials create task force groups, they often face little opposition, giving people hope that they can bring change.

“But then the task force doesn’t change anything,” Willmott said. “So it appears on the surface like you’re being brought to water, but you’re not allowed to drink.”

“They know that you just allow the focus to drift away and then you get to go back to normal. Until the next George Floyd, which might be in Kansas. You never know,” he said.

In Wyandotte County, which includes Kansas City, then-Mayor David Alvey created a task force in 2020 to discuss policing practices, but he told task force members not to advocate for specific changes during meetings.

“It was such a politically charged atmosphere,” Alvey said. “I wanted to keep the politics out of it as much as possible.”

About a quarter of Wyandotte County’s population is Black and voters have elected a similar percentage of Black commissioners since 2005. Alvey narrowly lost reelection last year to Tyrone Garner, who became the community’s first Black mayor. Garner, who previously served as deputy police chief, ran for office on a police reform platform. He also announced a new committee to look into policing practices, which he said would — unlike his predecessor’s group — craft proposals for the city to vote on. The committee held introductory meetings last month.

Garner’s views of the community and policing have been shaped by his years as a police officer. Early in his career, a Black police major told him about how minority officers previously weren’t allowed to arrest or interact with white residents. Stories like that prompted Garner to pay attention to how colleagues talked about minority police leaders and officers.

Among other things, Garner hopes his new task force will consider requiring an outside law enforcement agency to conduct police misconduct investigations.

Discussions are in progress in other Kansas communities. In Topeka, a task force set up by a former mayor is reviewing police policies in response to proposals to ban chokeholds, prohibit officers from firing at fleeing suspects and create an independent citizen panel to investigate allegations of police misconduct. The group has met for almost two years and hasn’t made any recommendations to the City Council.

City commissioners in Salina approved a 2020 proposal to create a new citizens review board, but advocates were disappointed that it didn’t give the board authority to investigate complaints.

In the affluent Kansas City suburb of Prairie Village, where Black residents make up about 1% of the population, the city’s budget this year included $10,000 for a diversity committee that is using some of the funds to celebrate Martin Luther King Day and Juneteenth, which commemorates the end of slavery in the United States.

After rallies in the southwestern Kansas community of Liberal following Floyd’s death, the city held a town hall where attendees discussed their experiences with racism. Latinos make up almost two-thirds of Liberal’s population.

About a month after the meeting, Liberal city commissioners passed an ordinance calling for similar public forums as needed, but so far no other meetings have occurred.

Racial justice advocate Kathleen Alonso pushed for the ordinance, but told the AP that she had shifted focus to increasing voter turnout. In November, Liberal elected two Hispanic members to the city commission, including its first Latina city commissioner.

In Manhattan, Parks, the local Black Lives Matter founder, is hopeful instead of frustrated that the city hasn’t yet taken up the task force’s more than 60 recommendations. Many of them are outside the city government’s control, but some are in its purview, including the hiring of a diversity, equity and inclusion officer to work across city-sponsored organizations.

Through her involvement, Parks has gained a line of communication with police that enables her to share information with other residents when they’re worried about something they’re hearing or seeing on social media. That’s leading to a better relationship between police and Black residents, who make up about 6% of the community, and that was one of Parks’ main goals.

Shortly before her Black Lives Matter group’s 2020 demonstration, Parks met an officer to contact with concerns. That new line of communication was tested that year when a witness made a video recording of a man who appeared to be having a seizure while he was detained in handcuffs. Parks contacted the officer and learned from police that they had kept him in handcuffs to prevent him from injuring himself.

“They answered every single question that we had, and we were able to bring that back and kind of give people a little bit of clarity about the situation,” Parks said.

It’s all aimed at meeting Parks’ goal of avoiding a high-profile police killing like George Floyd’s in Manhattan.

“To hear that grown man, call out for his mother — I just couldn’t — I can’t even talk about it,” Parks said, her voice shaking. “That is just something I would never want to see for my kids.”