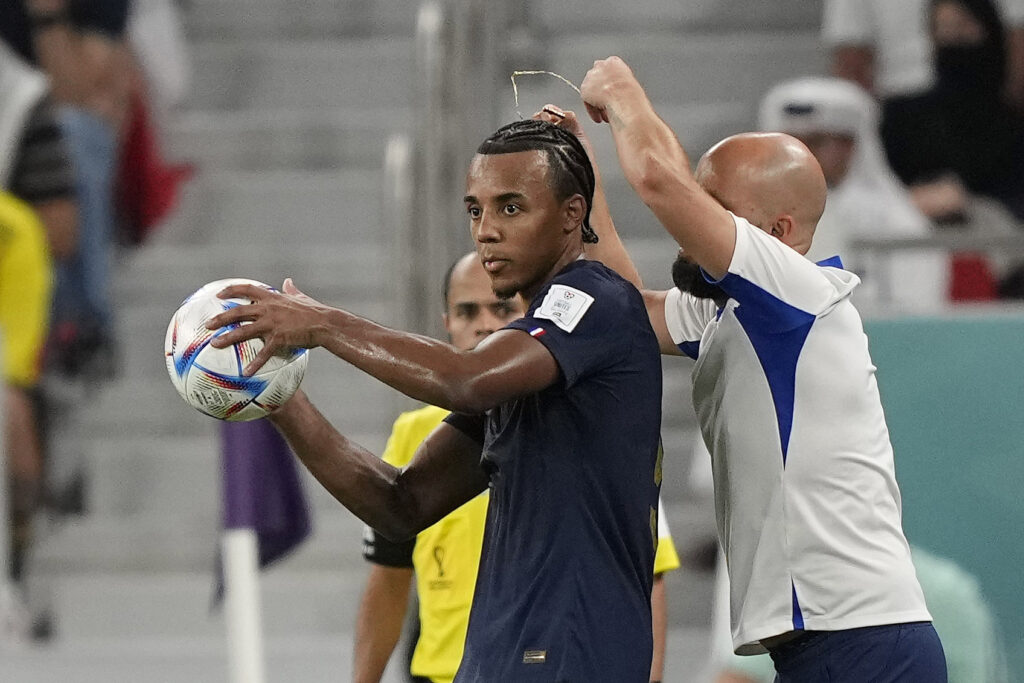 France’s Jules Kounde was bizarrely told to remove 2 necklaces over 40 minutes into their last 16 match with Poland. IFAB’s Laws of the Game state ‘all items of jewellery (necklaces, rings, bracelets, earrings, leather bands, rubber bands, etc.) are forbidden and must be removed. Using tape to cover jewellery is not permitted.’ The Associated Press has the story:

France defender Jules Kounde was told by a match official to remove two gold chains he was wearing during the defending World Cup champions’ game against Poland.

Kounde had the chains on until the 41st minute — on clear display up to that point in Sunday’s match — when referee Jesus Valenzuela instructed Kounde to take them off. A France assistant called Kounde to the sideline and unhooked the clasps from behind his neck then returned to the dugout.

After France defeated Poland 3-1 to move on to the quarterfinals, France coach Didier Deschamps was asked if Kounde kept the chains on because they displayed a rainbow symbol. At the start of the World Cup, FIFA threatened European teams that planned to wear “One Love” armbands with in-game discipline; seven captains had vowed to wear the bands.

Deschamps said he had no idea what was on Kounde’s necklaces, but noted that all jewelry is banned from being worn during matches. The official rules of the game call for players to be inspected at the start of each match to ensure they are not wearing any banned items.

“I don’t know what was on his necklace, to be honest,” Deschamps said. “I know that Jules is superstitious and he usually wears that necklace even in training and I said to him, ‘You are lucky that I wasn’t next to you because I would completely taken it off as well.’

“I know that players don’t have the right to wear necklaces or bracelets. He’s not allowed to wear a necklace, you can’t play with sunglasses, or a watch, or a ring, or a necklace, for that matter. It is not allowed, and I thought he had taken off, but he hadn’t. So that’s our fault.”

Previous Article
Blinken: US will judge next Israeli Gov. by Policies
Next Article
Musk’s Twitter content moderation is a Messy job