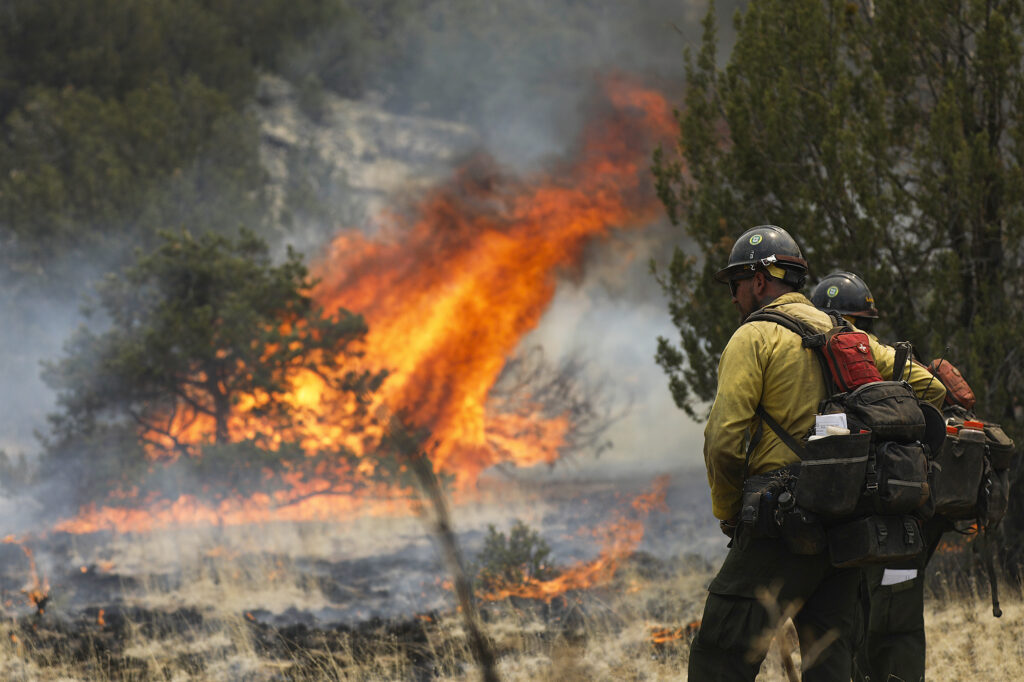 Wildfire season is raging throughout the western U.S. and fierce competition for workers is exacerbating challenges facing the land management agencies that employ firefighters, as there is a labor shortage. The Biden administration announced Tuesday that infrastructure bill funds would go to backpay and giving all federal firefighters a raise for two years. As reported by the AP:

“It’s an effort and an attempt to try to keep labor up and people at their jobs,” Jonathon Golden, a former federal firefighter from Park City, Utah, said of the move to raise federal firefighter pay. “But it still falls woefully short of the pay in municipal departments and other state agencies.”

Wildfire season is raging throughout the western U.S. and fierce labor competition for workers is exacerbating challenges facing the land management agencies that employ firefighters. For years, firefighters and their advocates have decried stagnant pay and increased costs of living, arguing both are making recruitment difficult and attrition inevitable.

The Biden administration announced Tuesday that infrastructure bill funds would go to backpay and giving all federal firefighters a labor raise for two years — either a 50% bump from their base salary or $20,000, whichever is less.

“I will do everything in my power, including working with Congress to secure long-term funding, to make sure these heroes keep earning the paychecks — and dignity — they deserve,” he said in a statement.

Though officials say it’s an imperfect metric, the number of unfilled staffing requests on large wildfires — or “unable to fill orders,” indicates growing problems: In 2019, there were 92 times where the National Interagency Fire Center couldn’t mobilize crews to wildfires upon request. In 2020, there were 339 crew mobilization orders that couldn’t be filled. And last year, 1,858 crew mobilization orders couldn’t be filled.

Ken Schmid, operations specialist at the National Interagency Fire Center, said “unable to fill” orders reflect staffing needs but also may depend on geography or time of year, particularly in months when agencies dedicate staff to training or other high priority work.

“What it comes down to is we’ve got more big fires out there and incident management teams with needs to try and corral them than we have folks available,” said Grant Beebe, a former smokejumper and the Bureau of Land Management’s assistant director for fire and aviation.

Members of the advocacy group Grassroots Wildland Firefighters believe raises were long overdue. However, they warn that without permanent increases, some of the nation’s most skilled firefighters — including hotshots, smokejumpers and helitack crews — may go work elsewhere.

“You can go to a Whole Foods and start off at $16 an hour with $1,000 signing bonus. It’s just a tight labor market now,” Golden, the former firefighter, said.

Mid-career federal firefighters currently earn roughly half the pay of third-year firefighters employed by the California Department of Forestry and Fire Protection, according to analysis from Grassroots Wildland Firefighters. Incident commanders working for federal agencies can make as little as one-quarter of the pay of entry-level municipal firefighters working the same fire.

Pay bumps and the creation of a new job classification that will allow more firefighters to be hired for year-round positions will narrow the gap between federal firefighters’ pay and benefits and their state and local counterparts, federal officials say.

In a factsheet released this week, they say they expect the changes announced Tuesday to help firefighting agencies recruit more workers and create career advancement opportunities for those already employed. Both, officials say, should lower attrition rates for skilled firefighters who have left for other departments or industries.

Land management agencies, mainly the U.S. Forest Service and Bureau of Land Management, hope to employ more than 30,000 firefighters during peak season this summer and have worked to recruit new employees throughout the spring.

But the Forest Service said last month that staffing levels were 90% overall, but as low as 50% in some fire-prone regions, including California, Oregon and Washington.

Randy Erwin, president of the union representing a majority of federal wildland firefighters, said recruitment and retention had been particularly difficult this year, amid a worse-than-normal fire season. He expects the pay bump to help agencies fill their firefighting ranks.

“Firefighters simply could not make ends meet on the hopelessly low salaries offered at federal agencies, so jobs were becoming very difficult to fill,” he said in a statement.

Brad Hershbein, senior economist at the W.E. Upjohn Institute for Employment Research, said there were few signs of competition for workers decreasing or hiring slowing down. Though the labor market remains tight, he said private sector employers have recovered to pre-pandemic levels more than public sector employers such as the federal agencies who employ firefighters.

Firefighting may be an attractive profession for young people craving adventure and a sense of purpose, but Hershbein said the allure would likely not insulate federal agencies from broader trends in the labor market and the many factors that prospective employees weigh when considering jobs.

“Based on my read of everything going on in the labor market, unless they are going to be doing other things to attract people — like bonuses and other incentives — it’s going to be really hard,” he said.

“They deserve the basic decency of good pay and good benefits that fully recognize their sacrifice and essential work, and allows them to support their families,” he said.

“Summer is here, there are firefighter shortages in Oregon and across the West, and there is no time to waste in getting these changes implemented on the ground.”