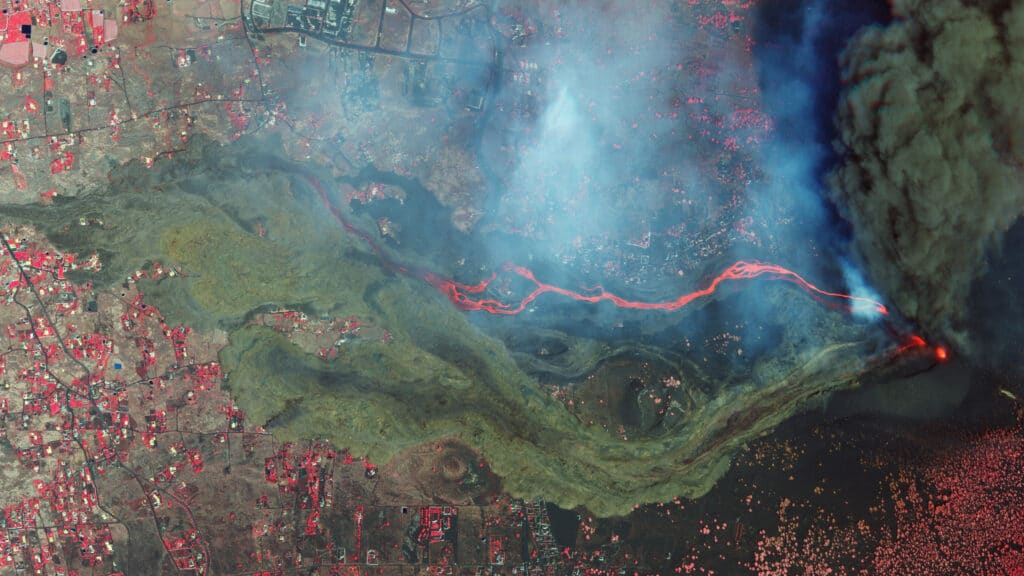 While one river of lava has slowed down on the island of La Palma, the other was hotter and more fluid, and has picked up its pace as it heads for the sea. The volcano on La Palma in the Canary Islands is still erupting with lava still flowing steadily out endangering everything in its path. The Associated Press has the story:

LOS LLANOS DE ARIDANE, Canary Islands (AP) — Lava flowing from an erupting volcano in Spain’s Canary Islands has picked up its pace on its way to the sea and is now within 800 meters (875 yards) of the shore, officials said Tuesday.

While one river of lava has slowed down on the island of La Palma, the other was hotter and more fluid. That second one was bearing down Tuesday on the small town of Todoque, whose people have been evacuated, the Canary Islands emergency volcano response department said.

For days, officials have been nervously awaiting the time when lava from the Sept. 19 eruption reaches the Atlantic Ocean, but the volcano has been erratic. After calming down on Monday, the volcano became more explosive again overnight.

When the molten rock eventually meets the sea water it could trigger explosions and the release of toxic gas, though authorities say they don’t expect the slow-moving lava to create a large disruption on the coast.

La Palma, home to about 85,000 people, is part of the volcanic Canary Islands, an archipelago off northwest Africa. The island is roughly 35 kilometers (22 miles) long and 20 kilometers (12 miles) wide at its broadest point.

Lava from the eruption has devoured everything in its path, destroying 589 buildings and 21 kilometers (13 miles) of roads on La Palma. The lava now covers 258 hectares (637 acres), mostly farmland, according to a European Union satellite monitoring agency.

No fatalities or serious injuries have been reported, thanks to the prompt evacuations of over 6,000 people.

But local people have lost their homes and their livelihoods at the same time. Farming is one of the island’s economic mainstays, along with tourism, and the lava and ash has ruined crops and irrigation systems, endangered aviation and poses a significant health risk to those nearby.

The Spanish government announced after its weekly Cabinet meeting Tuesday it’s providing an immediate grant of 10.5 million euros ($12.3 million) to buy 107 properties to rehouse local people and also provide them with income aid.

More aid, including for rebuilding of public infrastructure, will be sent once the current emergency is over, government spokeswoman Isabel Rodríguez said.

The volcano has so far spewed out more than 46 million cubic meters (1.6 billion cubic feet) of molten rock, according to the Canary Island Volcanology Institute.