ArtsCultureLife in the Iron BoxTop Story

Life in The Iron Box. Part One: My E-Wallet 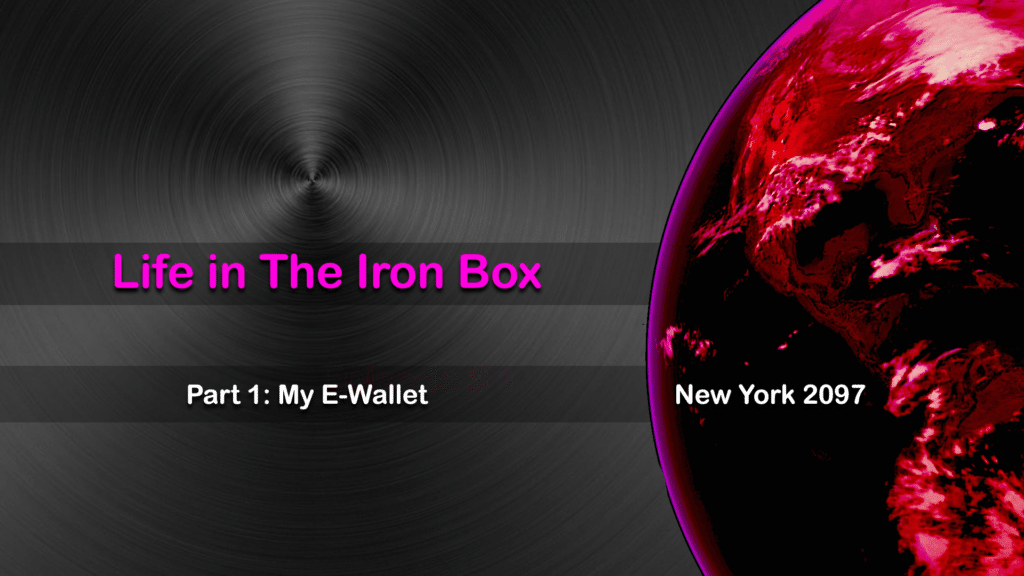 (It is not necessary to exist, to realize the possibility of your living in a future whose features have begun.)

Bright red smoke flooded the sky of New York City at six o’clock in the evening of Friday the fifteenth of November 2097.

Thousands of flying cars began descending on the roofs of metal houses, looking like a flock of birds on their way back to their nests.

Warning sirens sounded, followed by loudspeakers, announcing the ban on movement. Bright numbers of light appeared in the sky. They are the countdown to the last minute in the life of every person who did not join his box and did not activate his nightly electronic account.

I had less than thirty seconds left to enter my iron box. I tried to double the speed of my Flying Machine but could not control its direction due to the blurry vision with red smoke rising from the giant pumps.

I took a deep breath and put on my night breathing mask, then put on my 3D glasses and pressed hard on the activation button.

– Your night account has been activated. You have the right to request your evening vaccination, feeding tablets and three bottles of water.

I buckled my seat belt and set the rest counter, waiting for the feeding pills and water to arrive. I attached the auto-vaccination thread to my right arm and activated the electronic endoscope to monitor my daily vaccine dose reaction.

A bright blue light was emitted into the space of my iron box and in less than three seconds, my health monitor agent was standing in front of me.

She told me she had to raise my daily vaccination dose by ten milligrams or else all my electronic counters would stop working.

I told her that I did not have enough credit in my electronic wallet to raise the dose. She suggested that I would have to work an additional 100 hours every month at X900 space Base, 12 thousand miles away from my Earth address.

I did not dare tell her that my Flying Machine is not fit for this distance daily. I had to accept the offer in the hope that the Base would provide me with a means of transportation. I had no other choice.

I felt a little dizzy while receiving the dose. I was thirsty and hungry, so I turned on the outside image display, waiting for the water and the feeding tablets to arrive. New York City was silent, except for the sound of flying vehicles and the shouts of National Guard soldiers aiming their fire hoses at the dead bodies scattered on curbside.

Suddenly I saw a big bird flying over one of the buildings. I zoomed in. It was the second time I saw a bird in the sky of this city in more than ten years. I wished I could open the window of my iron box to enjoy watching it live, but I remembered the strict laws that prevent leaving the e-chair after receiving the nightly dose, and the dire consequences for my e-wallet.

You may be wondering, what is an e-wallet?

The first paragraph of Chapter I of the law regulating the right to housing in the City of New York, and to obtaining the daily nutritional tablets, doses of oxygen, and drinking water, affirms that:

“Every resident of New York City is obliged to have an electronic chip installed under the skin of his upper back, and it is called an e-wallet.”

All residents are required to e-register at the Department of Internal Security to get their chips.

Once chipped a resident must have enough e-Units to order water and nutritional tablets, oxygen supply, activation codes for virtual meetings with family and relatives.

Citizens like me, need to work hard to earn Units, working long hours in construction or maintenance, thousands of miles away in space bases.

As a state employee I am lucky to be able to earn enough Units. To keep up with the high cost of life in this city, I start a second job at night as an agent with the AMSS (The Agency for Moral Stimulation Services), a good way to make some extra Thousands Units per week.

I do also spend one hour every night making clicks, views, and likes, another common way to earn Units.

Last month I had to send five thousand Unit to my brother, he is the only relative I have.

I am happy I can make a living in New York City, although my daily commute is very painful due to crowded skies and the bad condition of my Flying Machine.

Three hours have passed, and I have not yet received the nutritional tablets and my water bottles. I started feeling very hungry and thirsty. I have not taken any tablets for more than twenty-seven hours.

I pressed the instant live chat button twice asking for my health monitor. She did not respond to my requests.  Moments later, she was standing in front of me, apologizing for the delay.

I asked her why I did not receive my nutrition tablets and water.

– Unfortunately, Mr. T 2235, you ran out of credit during your last vaccination dose.

– But you told me three hours ago that I could work an extra hundred hours to cover the cost of the modified dose, so what should I do now?

– I’m sorry, I can’t help you. You must bear this night and when you reach Base X 900 tomorrow, you can ask your supervisor to add ten thousand doses as an advance to your electronic wallet.

I closed my eyes hoping that sleep would relieve me of the pain of hunger and dryness of thirst and plunged into the dark space of my iron box, waiting for the early morning hours.

Read the next Part: Rat Man