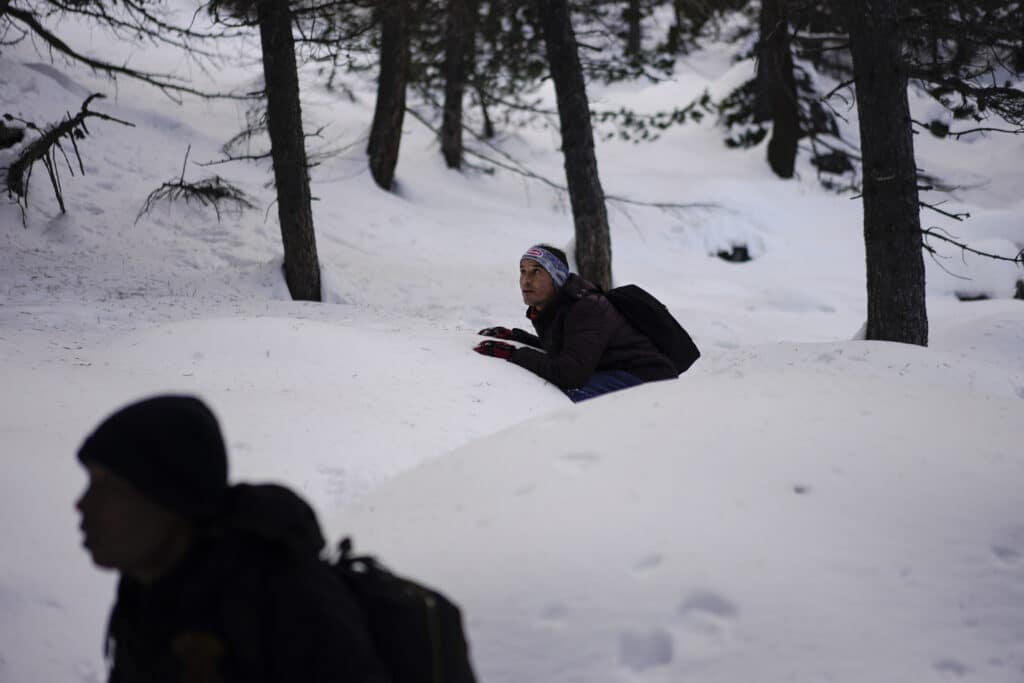 Volunteers working along the Italy- France border, help exiles from conflict zones and oppression of all kinds who trek through the Alps and onward to European cities in search of brighter futures, keep one thought in mind, these are people, first and foremost. The migrants making the dangerous journey while fleeing oppression, are finding the high-altitude dwellers of the Alps they meet, to be helpful and kind, and most of all sympathetic to their plight. As reported by the AP:

The migrants crossing the Alps, are surprised to find people who treat them like human beings and are ready to help them, rather than repel

MONTGENEVRE, France (AP) — From the inky night, two women loomed. Police? The wary migrants, crossing the high-altitude Alpine border clandestinely from Italy to France, couldn’t be sure. They scattered and ran.

In fact, the women wanted to help the Moroccans evade border patrols, not detain them. They distributed hand-warmers to the shivering migrants, helped them hide in snowy woods until the coast was clear, and then steered them to waiting cars that whisked them from the frozen peaks to a warm shelter.

“They treated us like humans,” said Hamid Saous, among the rescued. “Not everyone does that.”

As Europe erects ever more fearsome barriers against migration, volunteers working along the Italy-France border to keep migrants from being killed or maimed by cold and mountain mishaps are driven by a simple creed: The exiles from conflict zones and oppression of all kinds who trek through the Alps and onward to European cities in search of brighter futures are people, first and foremost.

Armed with thermoses of hot tea and the belief that their own humanity would be diminished if they left pregnant women, children, and men young and old to fend for themselves, the Alpine helpers are a counterargument to populist politicians with large followings in Europe who say migrants, particularly Muslims and Africans, are threatening European livelihoods and liberal traditions.

In the Alps, on both sides of the border, the approach is essentially humanist and humanitarian, grounded in local traditions of not leaving people alone against the elements. Starting around 2016, when they first began encountering sneakered and thinly clothed migrants in trouble on Alpine passes, mountain workers refused to look the other way.

That assistance grew into networks of hundreds of volunteers who run migrant shelters, clothe those in need for the hazardous crossing and trek into the cold. They clear paths in the snow by day for migrants to follow and wait for them at night, to guide them past border police to safety and, if necessary, treatment for frostbite and other medical needs.

“Often, we say, ‘Welcome! How are you?’ We speak a bit of English because most people speak at least a bit,” said volunteer helper Paquerette Forest, a retired teacher.

Some refuse assistance, generally “men who are quite robust,” she said. “Exhausted people say, ‘Yes.'”

“We walk with them, discreetly. We try to avoid being spotted. We wait in the forest if needed. And we sort out vehicles to come and pick them up,” she said.

Migrants credit the volunteers for saving lives and limbs. The Alps aren’t as deadly for migrants as the Mediterranean Sea, where many hundreds have died or gone missing this year alone. And the mountains have so far been spared a tragedy on the scale of the boat sinking that killed 27 men, women and children, the majority Iraqi Kurds, in the English Channel in November.

“If not for them, we would have died of cold,” said Aymen Jarnane, 23, another Moroccan led to safety on a night when the thermometer dropped to minus-15 degrees Celsius (5 Fahrenheit).

But there have been deaths. Aid groups pleaded for French authorities to provide Alpine shelter to exiles and stop pushing them back into Italy after a Togolese man found hypothermic in freezing temperatures died during a night trek across the border in February 2019.

Iranian exile Bizhan Bamedi had a companion film him on the crossing, to show how punishing it is.

“Hi guys. I’m recording this for those who say, ‘Good for you, you went to Europe!'” he said, ankle-deep in snow in a clearing amid frosted pines. “Someone like me who has crossed through jungles and mountains from Turkey is now here. I have no place to lie, no place to sit. … It’s a really difficult path.”

“The temperature is minus-10 degrees,” he continued. “I’m hungry and thirsty but can’t eat snow. Good luck!”

On top of the physical difficulty, a cruelty of the crossing is that Europeans pass through the border without even knowing it’s there. Crisscrossed by ski runs, the frontier is a playground for vacationers who don’t get stopped by police. But it is so inhospitable for migrants that some quickly give up, even equipped with donated cold-weather gear.

“When you are African or Arab with black hair you’re not getting through even if you dress up like that,” said Jarnane. “If you put on a hat or something, people can still see your brown or black eyes and that you’re not from around here.”

Health workers in a volunteer-run shelter for migrants on the French side, in the fortified town of Briançon, patch up those who get through.

“People arrive cold, dehydrated, thirsty, hungry,” said Isabelle Lorre of Doctors of the World, after taking care of an Iranian with an infected toe who trekked for 15 hours through snow, he said was thigh-deep at times.

European opponents of migration argue that aiding exiles encourages others to follow. The view of those assisting them in the Alps is that not helping simply isn’t an option.

“Some of them have traveled 7,000 or 8,000 kilometers before getting here, so it’s not a mountainous barrier that will stop them,” said Jean Gaboriau, a mountain guide who helps run the Briançon shelter.

“Regardless of skin color, political or religious beliefs, everyone has the right to be saved or simply to be welcomed.”