Missing for 22 years, Klimt portrait, to star in Rome show 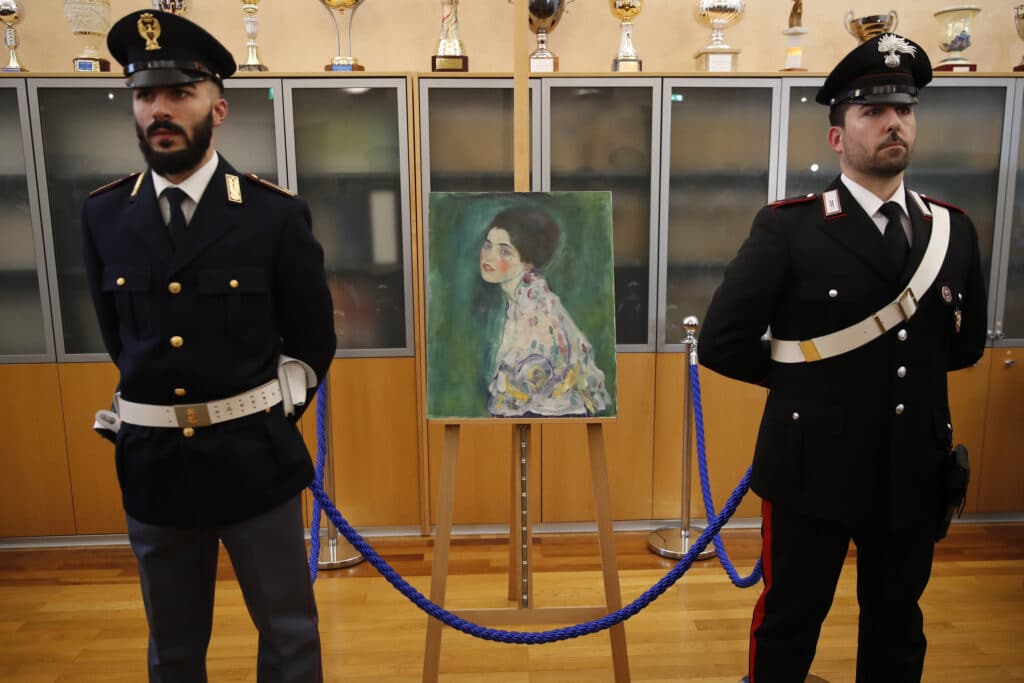 Gustav Klimt’s “Portrait of a Lady,” will star in an exhibit about the Austrian artist that is opening this month at a Roman museum. Art experts announced in January 2020 that a painting discovered hidden inside a Piacenza art gallery’s wall was the missing portrait. The Associated Press has the story:

The stolen Klimt was discovered by a garner in December of 2019, hidden behind a panel in an outer wall

ROME (AP) — Gustav Klimt‘s “Portrait of a Lady,” which went missing for nearly 22 years after its theft from an Italian museum, will star in an exhibit about the Austrian artist that is opening this month at a Rome Museum.

Art experts announced in January 2020 that a painting discovered hidden inside a Piacenza art gallery’s outer wall was the Klimt portrait that had been stolen in 1997 from the Ricci Oddi Modern Art Gallery in that northern city.

The work, along with other Klimt paintings, sculptures, and drawings, will feature in an exhibit opening on Oct. 27 and running for five months at the Museum of Rome in Palazzo Braschi, organizers said Friday. The painting then will go on display in Piacenza in April in another exhibition.

In December 2019, a gardener at the Piacenza gallery was clearing away ivy when he noticed a small panel door in a wall and opened it. Behind, he found a plastic bag containing what was later authenticated as the stolen Klimt.

The painting depicts a young woman sensually glancing over her shoulder against a dreamy, moss green background. Klimt completed the portrait in 1917, a year before he died, and the Ricci Oddi Gallery acquired it in 1925.

How, why and just when the portrait wound up stashed behind a gallery wall has been a mystery. It’s unclear if it ever left the gallery grounds. One theory holds that whoever stole it might have hidden it there waiting for the news of the sensational theft to quiet down, but for some reason never retrieved it.

Organizers of the Rome exhibit say the show will explore, among other aspects, the artist’s relationship with Italy and the influence he had on other artists working in the country.