Mural of Desmond Tutu is fixed for his 90th 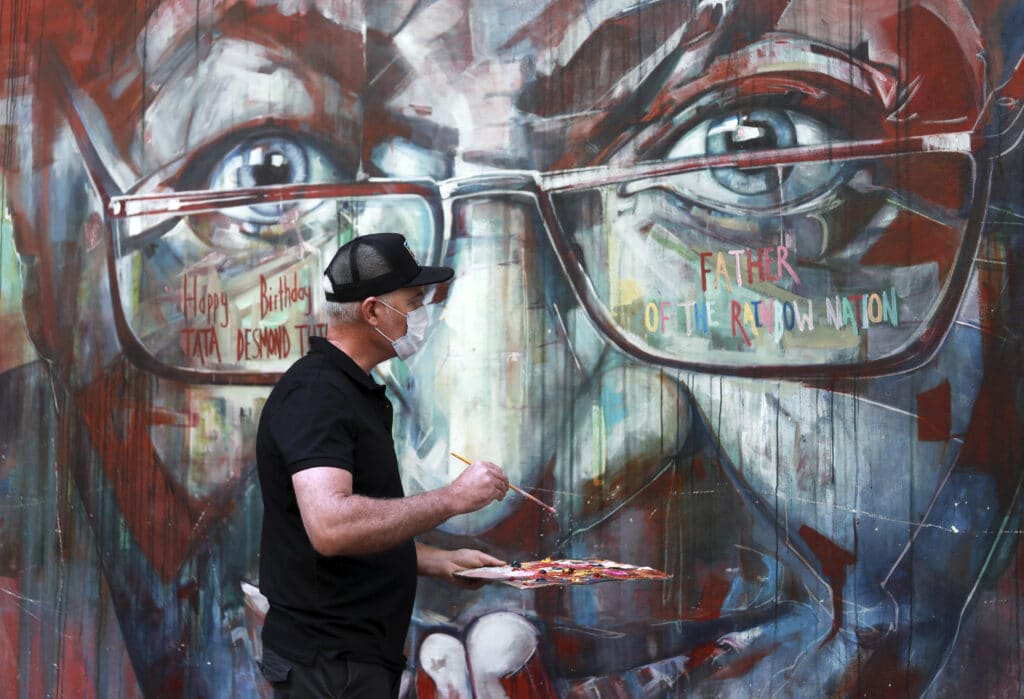 A portrait of Desmond Tutu was recently defaced by racist graffiti and has been restored by the artist, who added a celebratory message. The artists, Brian Rolfe fixed the mural and added his own message, hoping the person who defaced the mural will see how horrible racist attitudes are. The Associated Press has the story:

CAPE TOWN, South Africa (AP) — As South Africa’s anti-apartheid icon Archbishop Desmond Tutu marks his 90th birthday Thursday, a portrait of him recently defaced by racist graffiti has been restored by the artist, who added a celebratory message.

“Happy Birthday Tata Desmond Tutu! Father of the Rainbow Nation,” using the Xhosa word for father — which was added to the large mural of Tutu by artist Brian Rolfe.

“At first I was so angry when the racist slur was painted on the mural,” Rolfe told The Associated Press.

“But then I thought the only way to respond is with a positive message. So I used the same space where the graffiti was to add the birthday message,” said Rolfe who originally painted the landmark mural in downtown Cape Town in 2017.

“I wanted to thank him for who he is and what he has done for South Africa,” he said.

The mural enlivens a wall of the Rainbow Academy which offers training to young artists from disadvantaged communities.

Tutu coined the term “Rainbow Nation” to describe how South Africa is a country with equal rights for people of all colors, following the end in 1994 of apartheid, the country’s brutal system of racial discrimination against the country’s Black majority.

Often hailed as the conscience of South Africa, Tutu was a key campaigner against apartheid. After South Africa achieved democracy in 1994, he continued to be an outspoken proponent of reconciliation, justice and LGBT rights.

“Racism is a curse South Africa must escape,” said Ramphele. “Archbishop Tutu’s legacy is huge. He fought against racism and fought for the humanity of us all.”

Although frail, Tutu attended a service on Thursday at St. George’s Cathedral in central Cape Town, where as the country’s first Black Anglican archbishop he delivered sermons excoriating apartheid. His wife, Nomalizo Leah Tutu, was also in attendance.

He was awarded the Nobel Peace Prize in 1984 for his campaign of nonviolent opposition to South Africa’s system of white minority rule.

After retiring as archbishop in 1996, Tutu was chairman of South Africa’s Truth and Reconciliation Commission, which investigated human rights abuses during the apartheid era.

Despite the serious nature of his work, Tutu brought an irrepressible humor to his frequent public appearances.

“I would not worship a God who is homophobic and that is how deeply I feel about this,” he said in 2013. “I would refuse to go to a homophobic heaven. No, I would say ‘Sorry, I would much rather go to the other place.'”

Tutu said he was “as passionate about this campaign (for LGBT rights) as I ever was about apartheid. For me, it is at the same level.”

He withdrew from public life in 2010 and issued statements through his foundation. He has been treated for prostate cancer and was hospitalized several times in 2015 and 2016 and underwent a surgical procedure to address recurring infections from past cancer treatment.

At the church service Thursday, fellow anti-apartheid campaigner Alan Boesak is scheduled to speak. There will also be an online seminar about Tutu’s life and values to be addressed by the Dalai Lama; the widow of Nelson Mandela, Graca Machel; former Irish Prime Minister Mary Robinson; and South African governance advocate Thuli Madonsela.