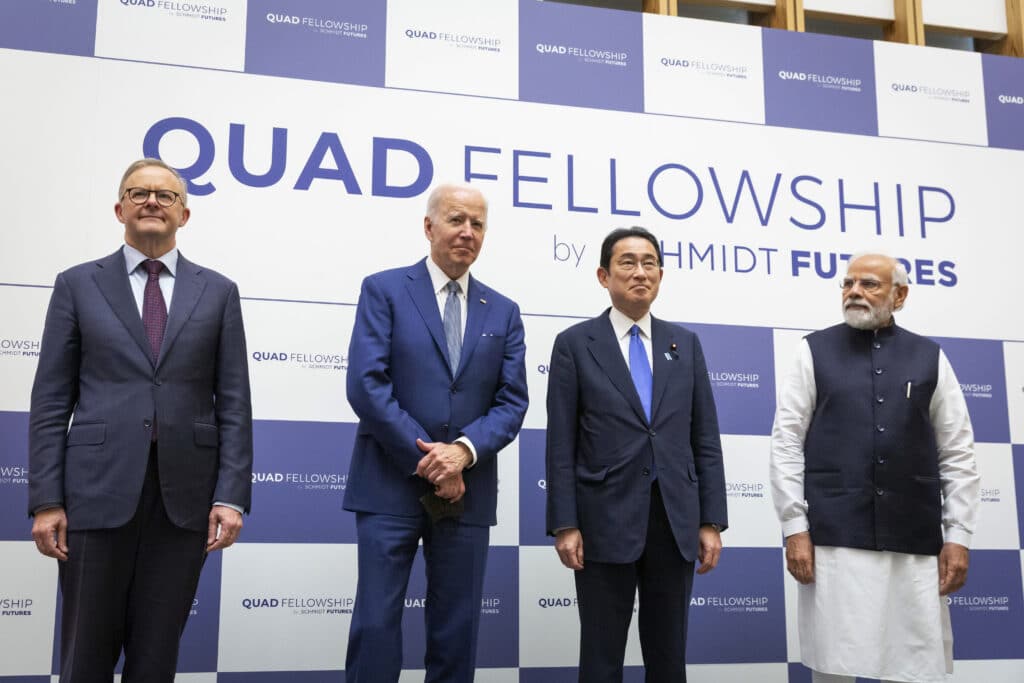 Anthony Albanese found his way to the top of Australia’s government as the nation it decided it needed a left turn in the political ape of the continent, and Albanese coming of his recent win, found himself fresh off a plane and right into the world spotlight at an international summit in Tokyo Japan.  Albanese’s election came after a hard-fought campaign during which he got COVID-19. Because his predecessor set the election date a week later than expected, Albanese had little time to prepare for the Tokyo summit. As reported by the AP:

For his efforts, to get to the summit, the newly-elected Australian Prime Minister Albanese received friendly greetings from other leaders

TOKYO (AP) — Hours after being sworn in as Australia’s new prime minister, Anthony Albanese found himself fresh off a jet and thrown into the glare of a global spotlight Tuesday. He was rewarded with a warm welcome, as well as a bit of a gentle ribbing, from U.S. President Joe Biden and other leaders at an international summit in Japan.

“You were sworn in and got on a plane, and if you fall asleep while you’re here, it’s OK,” Biden joked as the leaders met at the Quad, an Indo-Pacific security and economic coalition meant as a counterweight to China’s growing influence in the region. Biden marveled at Albanese’s stamina. “I don’t know how you’re doing it. But it is really quite extraordinary, just getting off the campaign trail as well.”

The weekend election win for Albanese, from the center-left Labor Party, was a vivid change in Australian politics, ending nine years of conservative rule, the last several under former leader Scott Morrison.

Albanese has described himself as Australia’s first-ever political candidate with a “non-Anglo Celtic name.” He and Malaysian-born Penny Wong, Australia’s first foreign minister who was born overseas, were sworn into office Monday just before they flew to Tokyo for the meeting with Biden, Japanese Prime Minister Fumio Kishida and Indian Prime Minister Narendra Modi.

Albanese’s election came after a hard-fought campaign during which he got COVID-19. Because his predecessor set the election date a week later than expected, Albanese had little time to prepare for the Tokyo summit.

For his efforts, however, he received friendly greetings from other leaders.

Kishida, in his opening remarks, took note of Albanese’s tight schedule, offering his “heartfelt appreciation for coming all the way to Japan right after the elections.” Modi said Albanese’s presence in Tokyo within 24 hours of his swearing-in “demonstrates the strength of our friendship within the Quad and your commitment to it.”

At the summit, Albanese stressed Australia’s unwavering commitment to the regional forum and stressed his country’s efforts to deal with climate change and look for greater engagement with Southeast Asian countries. He did not mention aggressive security moves by China, which many countries in Asia view with worry.

Chinese Premier Li Keqiang wrote to congratulate Albanese on his election victory, in what Australian media described as a thawing of relations after years of tension over Australian laws designed to outlaw covert foreign interference in politics, which many see as aimed at China.

“It is an honor that this is my first act as prime minister to attend this important Quad leaders’ meeting here in Japan,” Albanese said in his opening remarks at Tuesday’s summit at the Japanese prime minister’s office. “We have had a change of government in Australia. But Australia’s commitment to the Quad has not changed and will not change.”

After what has been a smooth diplomatic debut, he will face a spate of domestic demands when he returns home Wednesday and attempts to fulfill his campaign promises. On the list are tackling climate change, affordable child care and strengthening Medicare.

By MARI YAMAGUCHI and ROD McGUIRK