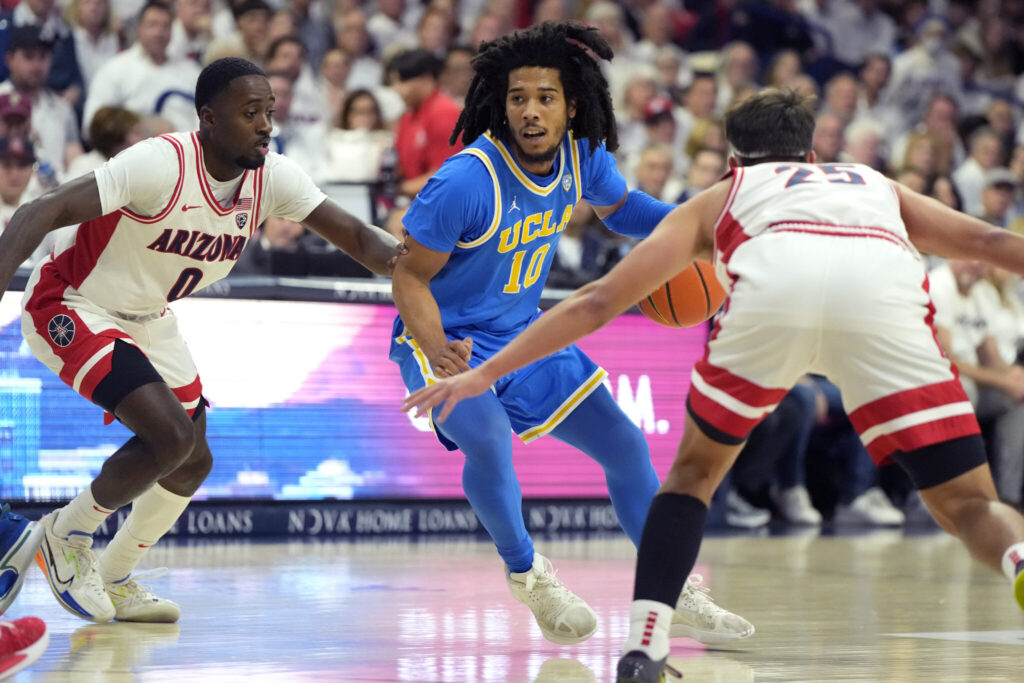 No. 11 Arizona men’s basketball beat No. 5 UCLA 58-52 in a physical contest. The Wildcats’ defensive was a big reason they handed the Bruins their first Pac-12 loss and snap a 14-game win streak. Arizona head coach Tommy Lloyd is now the fastest coach to reach 50 wins (57 games) in Pac-12 history and is now 3-0 vs. AP Top 5 teams since arriving in Tucson. The Associated Press has the story:

Oumar Ballo scored 16 points, Azuolas Tubelis had a double-double and No. 11 Arizona withstood a late rally to end No. 5 UCLA’s 14-game winning streak with a 58-52 victory on Saturday.

The Bruins (17-3, 8-1) fought back, creating four straight turnovers to pull within 56-52. UCLA then blocked consecutive shots — one after a review waved off goaltending — but couldn’t convert on two shots of its own.

Arizona’s Pelle Larsson hit two free throws with 0.9 seconds to close it out. Tubelis triggered an 11-3 run to give Arizona a 10-point early in the second half, finishing with 14 points and 10 rebounds.

UCLA matched its longest winning streak since 2007-08 on Thursday by pulling away late to beat Arizona State 74-62. The Bruins had a lot more trouble with Arizona, particularly at the offensive end.

UCLA shot 31% and went 4 of 20 from 3-point range to lose as a top-5 team at McKale Center for the second straight season. Tyger Campbell led the Bruins with 13 points and Jaime Jaquez Jr. added 12 with 11 rebounds.

Arizona beat then-No. 3 UCLA last season in a charged atmosphere that included an assault citation for UCLA forward Mac Etienne after he appeared to spit in the direction of Arizona fans while leaving the court.

On Saturday, the Bruins and Wildcats went toe to toe in the paint and perimeter, bodies bouncing off the floor in a physical, defensive afternoon. The Bruins banged on Ballo and Tubelis in the post on every touch, creating numerous close-range misses — and plenty of fouls.

UCLA backup big man Kenneth Nwuba had four fouls in the first half and Ballo made 8 of 10 free throws to score 12 first-half points.

Arizona hit 7 of 23 shots and was the better-shooting team, taking a 26-23 halftime lead.

UCLA: Pushed the Wildcats around early and created havoc with their defensive pressure late. In between, the Bruins didn’t hit enough shots to leave the desert with a win.

Arizona: Weathered UCLA’s bumping and banging in the first half, then withstood a furious rally to earn the type of win that should move it back into the top 10.

UCLA: At rival USC on Thursday.