The “Nord Stream 2” pipeline and the EU-US alliance 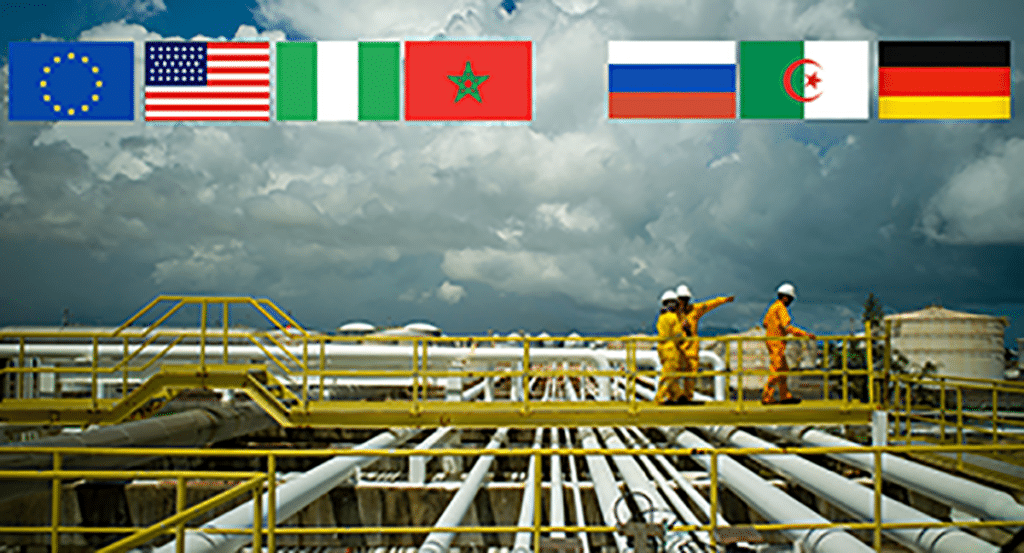 With the continued dependence of Europe on Russian gas, it becomes clear that the scale is strategically tilted in favor of Moscow, which often trades its political positions for its gas supply to Europe.

“Nord Stream 2″ is a project that will enable Russia to export gas to Germany and from there to the rest of Western Europe. Its length, upon completion, is estimated at about 2,460 km. It includes extending two Russian gas pipelines with a total capacity of 55 billion cubic meters of gas annually.

According to the latest statistics, Russia is the first supplier of natural gas in the world, and it is the top exporter to Europe.

So, every attempt to reduce Europe’s dependence on Russian gas encounters the obstacle of high prices, while the Russian-German gas pipeline project will result in a price drop by 25%.

Europe and the political price of Russian gas

Since the fall of the Berlin Wall, Moscow has been trying to compete with the United States in Western Europe economic markets. The Russians consider the American hegemony on the European market to be unjustified as long as they participate in the world’s free market system.

Russians are intensifying their efforts trying to  tighten their grip on the European Union countries, aiming to get the United States out of competition.

While competing with the US in the field of armaments is not a sure shot due to a clear American supremacy, and the strong EU ties to NATO, securing energy sources for the old continent remains the easiest move for the Russians, relying on the fact that the European Union countries realize that Russia is in the neighborhood and its gas is indispensable.

At first glance, it may seem that the goals of the Russian-German gas project “North Stream 2” are purely commercial, but an analysis of Russian strategic intentions will reveal that Moscow is seeking to regain its hegemony on the market so that it can then impose its political positions not only over states that were part of the former Soviet Union, but also over the rest of the continent.

Europeans are not happy with Moscow’s handling of their national security issues, and its  attempts to interfere in their elections, as it did in the United States. Also Moscow’s cyber army infiltrated many European institutions including cyber-attacks on research institutes in Europe, in an attempt to steal information on the vaccine for the Coronavirus, according to the findings of the British Center for Electronic Security.

Moscow’s attempts to poison Russian dissidents on European soil constituted an embarrassment for European countries especially that they failed to adopt a unified position to punish Russia. Moscow, for its part, believes in delinking Russian-European cooperation in the energy sector from other controversial issues (Syria, the Iranian nuclear project, North Korea and human rights) is paying the price.

Europe faces a potential political price it has to pay for Russian gas, which greatly exceeds the savings it made in buying the Russian gas.

The biggest price is risking relations with the United States. The statements of the US Secretary of State Antony Blinken opposing the “Nord Stream 2” gas pipeline do not bode well for optimism, but rather put all NATO members to the most important test since its inception. Secretary Blinken has not spared Washington’s sanctions against companies that contribute to this project. In addition, the US Congress approved the draft defense budget for the fiscal year 2021, which includes additional sanctions against the “Nord stream 2” project. And if Washington believes that the Russian-German gas project is detrimental to its interest and that of its European allies, such as Ukraine and Poland, then this alone is sufficient to say that Moscow has gradually succeeded in inserting some thorns in the path of the Atlantic (Euro-American) alliance.

Washington’s relations with Berlin are going through a difficult test, because Berlin has a tough choice, either to proceed with the Nord Stream 2 project at the expense of the American interest and the interests of the rest of its European neighbors, or cancels it and incurs large financial losses.

Nigerian Gas as an alternative

We cannot talk about other alternatives to Russian gas to Europe without taking into account the geographical factor, the cost, guarantees of continuity of flow, in addition to the factor of political stability in countries of origin and transit countries. There are some options:

The passage of the proposed Qatari gas pipeline through Syria and from there to Turkey and then Europe cannot be reliable in the medium or even the long term. The security situation in Syria today is preventing the idea from being implemented. Russia is the one who stands today on the side of the Syrian regime and protects it, and that the Qatari gas pipeline project needs a Russian approval which is not attainable for purely economic and strategic reasons.

As for the United States as an alternative supplier of gas to Europe, it is a theory that clashes with the reality of US energy plans.

The United States has impressive gas reserves, however, there has been a rise in calls for limiting exploration, as well as calls for alternative energy projects. In addition, the cost of American gas cannot easily compete with the cost of transporting Russian gas to Europe.

The African alternative, in particular Nigerian gas, remains the most realistic from a purely strategic point of view. In this regard, Algeria is competing with Morocco to win the Nigerian gas pipeline project to Europe. While Morocco proposes the Safe Road project, Algeria offers the shortest path.

In an interview with Al-Nahar TV, Algerian Energy Minister Abdelmadjid Attar described the construction of a gas pipeline project between Nigeria and Morocco as a political project that has no economic benefit. This statement was considered by some to be at the center of the media war and competition. The gas project across the Algerian road faces many security challenges, the most important of which is its passage through the Sahel region, which to this day is considered a safe haven for terrorist organizations and cross-border crime gangs.

Moreover, the Algerian-Nigerian gas project is betting on the control of four countries on the continuity of the flow, and the most important thing is that Russian-Algerian relations may enable Moscow to control the project behind the scene.

The economic feasibility of the Moroccan project lies in creating an economic partnership between all the transit countries, including African and European ones. And enabling not only Nigerian gas to reach Europe, but also Mauritania and Senegal.

Thus, some believe that the Moroccan-Nigerian gas pipeline project guarantees the economic and developmental benefits of 12 countries in Africa and largely serves the development goals in the western African continent, which is in the interest of the Europeans mainly with regard to the issue of illegal immigration.

Now the question is: would the interest of Europe and the United States be served through the Nigerian Moroccan gas pipeline project?

The answer is definitely yes. But on the condition that the United States engage not only in the financial support, but also by ensuring that the Russians do not use their allies in Africa, especially Algeria, to campaign against this project, which will benefit economically and politically the United States and about 300 million African citizens.

Previous Article
CBS: Sharon Osbourne no longer in “The Talk”
Next Article
Hall of Fame Award to Eddie Murphy