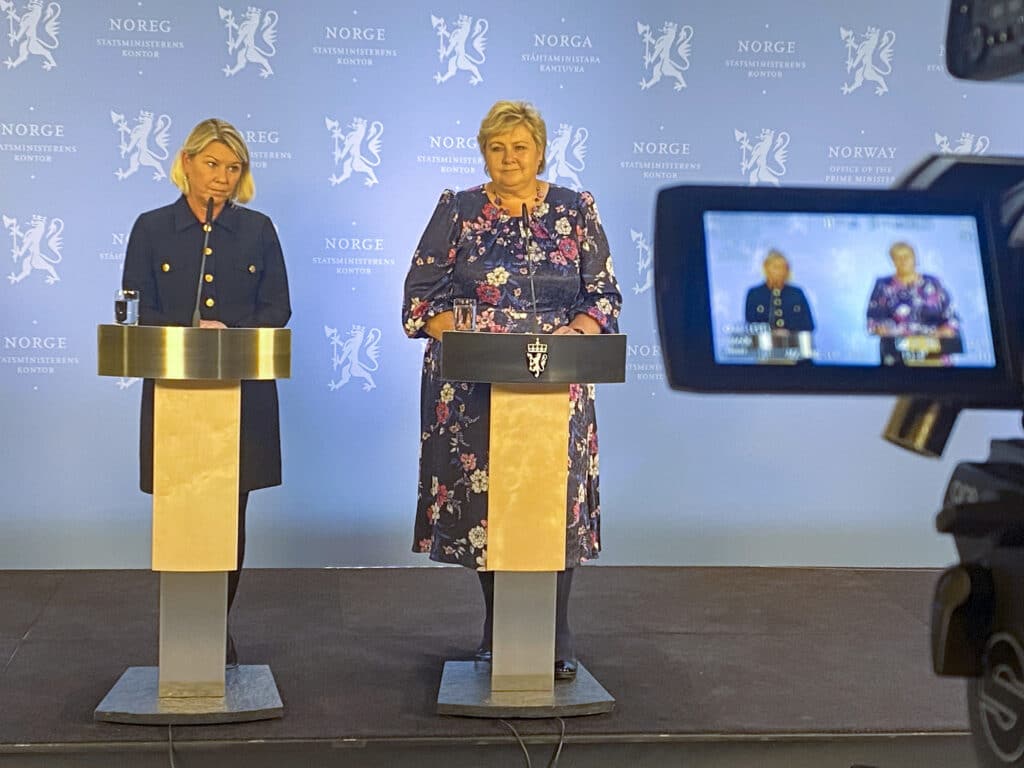 This is confusing to many in the U.S. because authorities here tell us that only in societies that allow open and free firearms ownership does this kind of thing happen, especially when you consider that many politicians say the mere fact of one owning a gun puts the owners under a spell that makes them commit violence. Here we are in a country with extremely strict firearms laws and still a tragedy like this occurs, proving that hatred lies in the heart not in an object, and someone wishing to cause harm to others will find any means they can to commence with that harm. The Associated Press has the story:

KONGSBERG, Norway (AP) — Norway’s domestic security agency says a bow-and-arrow attack that killed five people appears to have been an act of terrorism.

The agency, known by its acronym PST, said Thursday that Wednesday night’s attack in a small Norwegian town “currently appear to be an act of terrorism.”

“The investigation will clarify in more detail what the incidents were motivated by,” it said in a statement.

It added that the suspect “is known to PST from before, without PST being able to provide further details about him.”

Police said Thursday that the Danish man suspected of the attack is a Muslim convert who was previously flagged as having been radicalized.

“Attacks on random people in public places are a recurring modus operandi among extremist Islamists carrying out terror in the West,” the domestic security agency said.

The agency said that “the most probable scenario of an extremely Islamist terrorist attack in Norway is an attack carried out by one or a few perpetrators with simple weapon types, against targets with few or no security measures.”

KONGSBERG, Norway (AP) — A Danish man suspected of a bow-and-arrow attack on a small Norwegian town that killed five people and wounded two others is a Muslim convert who was previously flagged as having been radicalized, police said Thursday.

The man is suspected of having shot at people in a number of locations in the town of Kongsberg on Wednesday evening. Several of the victims were in a supermarket, police said.

“There earlier had been worries of the man having been radicalized,” Police chief Ole B. Saeverud told a news conference. He added that there were “complicated assessments related to the motive, and it will take time before this is clarified.” He didn’t elaborate on what was meant by being radicalized.

Ann Iren Svane Mathiassen, the police attorney who is leading the investigation, told Norwegian broadcaster NRK that the suspect will be assessed by forensic psychiatric experts Thursday.

“This is not unusual in such serious cases,” she was quoted as saying.

The victims were four women and one man between the ages of 50 and 70, Saeverud said.

Police were alerted at 6:12 p.m. on Wednesday to a man shooting arrows in Kongsberg, some 66 kilometers (41 miles) southwest of Oslo. Officers made contact with the suspect but he escaped and wasn’t caught until 6:47 p.m., Saeverud said.

Officials believe that the man didn’t start killing people until police arrived on the scene.

“From what we know now, it is reasonably clear that some, probably everyone, was killed after the police were in contact with the perpetrator,” Saeverud said.

Speaking calmly and clearly after his arrest, the suspect told police, “I did this,” said Svane Mathiassen. The suspect “clearly described what he had done. He admitted killing the five people,” she told The Associated Press

The rampage happened in clear view of dozens of witnesses in this small town, which today is in hushed shock, according to onlookers. Police have already spoken to between 20 and 30 witnesses who saw the attacker wound and kill his victims, according to Svane Mathiassen.

“There are people who saw him in the city. Before the killings. That is when he injured people,” she said.

Erik Benum, who lives on the same road as the supermarket that was one of the crime scenes, told the AP that he saw the escaped shop workers sheltering in doorways.

“I saw them hiding in the corner. Then I went to see what was happening, and I saw the police moving in with a shield and rifles. It was a very strange sight.”

The following morning, the whole town was eerily quiet, he said. “People are sad and shocked.”

The bow and arrows were just part of the killer’s arsenal. Police are yet to confirm what other weapons he used. Weapons experts and other technical officers are being drafted in to help with the investigation.

Both the hospitalized victims are in intensive care. They include an off-duty police officer who was inside the store. Their condition was not immediately known.

The suspect is being held on preliminary charges, which is a step short of formal charges. He will formally face a custody hearing Friday. Police believe he acted alone.

“It goes without saying that this is a very serious and extensive situation, and it naturally affects Kongsberg and those who live here,” Police spokesman Oeyvind Aas said earlier.

Norwegian media reported that the suspect previously had been convicted of burglary and possession of drugs, and last year a local court granted a restraining order ordering him to stay away from his parents for a six-month period after he threatened to kill one of them.

“This is unreal. But the reality is that five people have been killed, many are injured, and many are in shock,” Gahr Stoere told Norwegian broadcaster NRK.

In a statement to the mayor of Kongsberg, Norwegian King Harald V said people have “experienced that their safe local environment suddenly became a dangerous place. It shakes us all when horrible things happen near us, when you least expect it, in the middle of everyday life on the open street.”

U.N. Secretary-General Antonio Guterres wrote on Twitter that he was “shocked and saddened by the tragic news coming from Norway.”

The main church in Kongsberg, a small town of some 26,000 inhabitants, was open to anyone in need of support.

“I don’t think anyone expects to have these kinds of experiences. But nobody could imagine this could happen here in our little town,” parish priest Reidar Aasboe told the AP.

The country’s worst peacetime slaughter was on July 22, 2011, when right-wing extremist Anders Breivik set off a bomb in the capital, Oslo, killing eight people. Then he headed to tiny Utoya Island, where he stalked the mostly teen members of the Labor Party’s youth wing and killed another 69 victims.

Breivik was sentenced to 21 years in prison, the maximum under Norwegian law, but his term can be extended as long as he’s considered a danger to society.

Olsen reported from Copenhagen, Denmark, and Lewis from London.