Now what for survivors of Hurricane Ida? 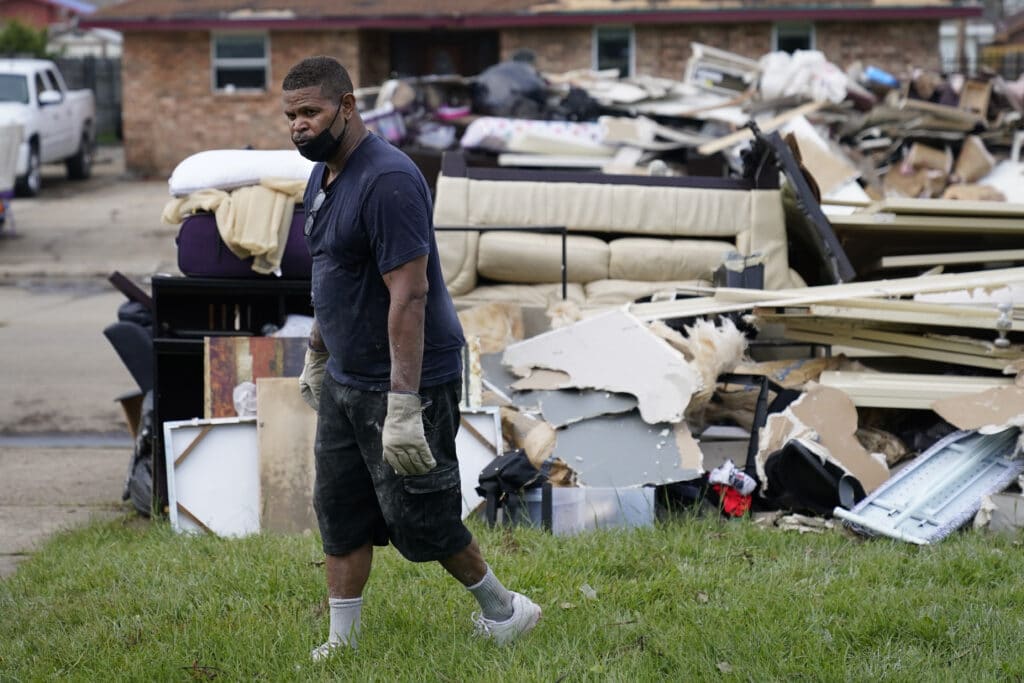 Those who had their homes and businesses destroyed during Hurricane Ida are now picking up the pieces of their lives and figuring out whether to rebuild or move somewhere else. Many are choosing to relocate, not willing to risk another hurricane hitting them again. The Associated Press has the story:

As Louisiana’s population decreases, some wonder if it is due to residents fleeing hurricanes

DULAC, La. (AP) — Coy Verdin grew up 100 feet (30 meters) or so from the slow-moving waters of Bayou Grand Caillou, and a few miles north of Louisiana’s marshy coast.

His parents still live in the firmly anchored, elevated mobile home that overlooks the sprawling oaks framing their view of the bayou. The 52-year-old’s own home on Fisherman’s Lane in the Dulac community is a short drive away, a little farther from the water, but close by.

A third-generation fisherman who also coaches volleyball at Grand Caillou Middle School in Houma, Verdin speaks glowingly, almost reverently about bayou life. But he doesn’t want to live “down the bayou” anymore. Not after Ida severely damaged his home — less than a year after it took minor damage from Hurricane Zeta.

“I’m moving,” he said, touring the ruins of his home, days after Ida badly damaged his roof and caved in his ceiling with torrential rains. “A little bit further up.”

Whether to evacuate or stay is often a question before a hurricane hits. If it hits hard, the question then becomes whether to stay or relocate. Ida, one of the strongest storms ever to hit Louisiana, made landfall on Aug. 29. That was 16 years to the day after Hurricane Katrina led to massive population shifts in southeast Louisiana. The latest storm, has people talking about leaving again. And not just in Verdin’s bayou country.

The city of LaPlace is a good 70 miles (110 kilometers) inland from Dulac and about 30 miles (50 kilometers) west of New Orleans. It’s a working class suburb tucked between the Mississippi River and Lake Pontchartrain. People cleaning up after the second major flood there in nine years — Isaac in 2012 pushed waters from the lake into their homes — are considering moving away.

“This is our second time around, and I just don’t want to experience it anymore,” Dawn Anthony said, standing outside the house where she’s lived for 27 years as her husband, Derek, worked inside, knocking down ruined drywall with a sledgehammer.

Down Cambridge Street — which was lined, yard after yard, block after block, with head-high piles of sodden furniture, carpeting, clothing, insulation and other debris — Michael and Shontrece Lathers watched as workers wrestled a blue tarp into place over their home.

“We didn’t need flood insurance when we bought this house,” Michael Lathers said as he toured the soggy mess that Hurricane Ida made of the home.

A mechanic, he’d been planning a move even before Ida hit, flooding the house for the second time since Isaac. Now, he’s expecting to sell the house at a loss. A recent highly touted groundbreaking on a flood control project that would protect his neighborhood is “10 years too late,” he said.

He won’t be leaving Louisiana, however. He plans to move to St. Helena Parish, where he has family, about 60 miles (95 kilometers) north of LaPlace, farther from the lake and the river. Likewise, Verdin, said he didn’t plan to move far from where he grew up. He’ll remain close to family and hopes to keep fishing.

“Environmental migrants, people who move because of repeated hazard events, typically move very short distances so that they can preserve all of that — their employment, their cultural capital, their friendship networks,” said Elizabeth Fussell, a professor at Brown University. “They don’t want to change everything in their lives. They just want to move away from risk, and that means moving a relatively short distance.”

Katrina caused catastrophic flooding when levees failed, swamping 80% of New Orleans. The city’s population plummeted. Even now, with a population estimated at 394,000, New Orleans has only 79% of its pre-Katrina population. Some hard-hit neighborhoods, like the Lower 9th Ward, haven’t recovered half their population, according to a report released this month by The Data Center of New Orleans.

What effect Ida will have on the region, whether it drives people to other areas or prompts moves inland, remains to be seen. And factors other than storms — housing costs, job opportunities — are often factors in population shifts, noted The Data Center’s executive director, Lamar Gardere.

While recently released 2020 census figures show that Louisiana’s population growth of 2.7% over 10 years lags the national rate of 7.4%, the growth has been largely in the southern part of the state, including the region around New Orleans and in suburbs near Baton Rouge.

That raises questions about whether people are leaving the state or the southern region because of storms, Gardere said via email.

“Interestingly, even among people that left New Orleans and never came back, many did eventually return to a neighboring parish, pointing more to the idea that economic issues drove relocation more than climate risk,” Gardere said.

In LaPlace, District Attorney Bridget Dinvaut, who helped her sister empty out a storm ravaged apartment, said she understands the impulse to leave after a disaster.

“It’s overwhelming. It’s horrific. The damage is so devastating. So, the visceral response is, ‘Just let me walk away from it,’” Dinvaut said.

But she believes people will decide to build back, especially in light of planned flood control.

And, on Bayou Grand Caillou, Coy Verdin’s mother Kathy Verdin said she isn’t ready to give up on bayou life.

“I don’t plan on leaving,” she said, leaning on a pickup truck parked beneath her elevated — and newly tarp-covered — mobile home. She gestured toward the water: “There’s no other place like this.”