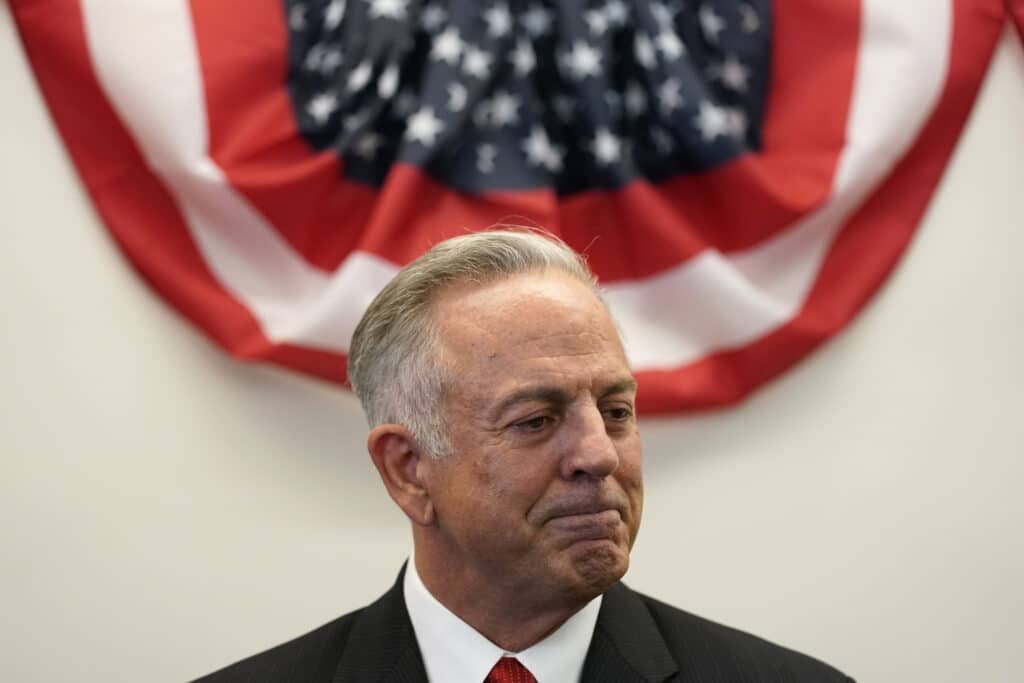 Some strange ads have popped up accusing Oklahoma Republican Gov. Kevin Stitt of being soft on crime, but they don’t appear to be coming from the right. The shadowy groups look like they are pretending to be from the right. The Associated Press has the story:

Someone trying to create division on the right over crime

OKLAHOMA CITY (AP) — With violent crime increasing in many parts of the U.S., Republicans see a winning strategy in portraying Democrats as soft on crime ahead of this year’s elections. In ads, campaign appearances and interviews, the GOP has ripped liberal policies and blamed Democratic lawmakers from the White House to city councils for the violence.

But in Oklahoma, where Gov. Kevin Stitt is being targeted for mass commutations and a crime that involved cannibalism, the attacks are different: Stitt is a Republican.

In one ad, a woman’s voice says Stitt commuted the prison sentence of a man who later “brutally murdered his neighbor, then tried to feed her organs to his family.” The ad, paid for by a group called Conservative Voice of America, concludes, “Oklahomans deserve a governor who cracks down on violent criminals, not one who lets them go.”

Democrats have borne the brunt of the political blame for the increase in homicides and other violent crime in recent years. In some cases that’s meant backpedaling on major criminal justice overhauls or insisting they don’t want to defund police departments, as some activists have advocated.

But now the attacks on some fellow Republicans are intensifying a split within the GOP between hard-liners and those conservatives who have shifted to support alternatives to prisons, largely as a way to save money. Groups that advocate various types of criminal justice reform worry the attacks could jeopardize meaningful changes that have occurred, many in heavily Republican states, such as Oklahoma, which has one of the highest incarceration rates, and Texas.

“We had been seeing sort of growing bipartisan consensus on reforms,” said Kevin Ring, president of Families Against Mandatory Minimums. But that’s gotten tougher because of rising crime and politics.

“There’s still some of those old holdouts who just are ‘lock them up, throw away the key’ types,” Ring said. “They’ve always been there, and I think that they have used the increase in crime to argue for a return to that posture by the party.”

Brett Tolman, executive director of the conservative criminal justice advocacy group Right on Crime, said “the accusation of being weak on crime gets thrown around very quickly,” causing “a lot of hesitation” in Congress. The former U.S. attorney said he now has to work with people mostly behind the scenes.

Republicans who support the changes say they can reduce crime as well as costs to taxpayers. When Stitt approved the 2019 mass commutation of more than 450 inmates in a single day, he said the release would save Oklahoma an estimated $11.9 million over the cost of keeping them behind bars. The commutations primarily benefited those convicted of drug possession or low-level property crimes.

“I see the Texas reforms have proven tough on crime but soft on the taxpayer, as any conservative policy should be,” Perry wrote in a newspaper column defending Stitt.

The attack ads targeting Stitt were paid for by dark money groups, which don’t have to make their donors public. They criticize Stitt for signing off on the parole of a man now accused of three killings, including those of a 4-year-old girl and a neighbor whose heart he cut out and tried to feed to relatives, according to authorities.

Donelle Harder, a spokesperson for Stitt’s reelection campaign, said it’s not clear who is funding the groups.

“The undisclosed, special interest groups are not conservatives, and they are not being honest about their intentions,” Harder said. “Gov. Stitt’s commitment to lead as a conservative political outsider is clearly upsetting a small few.”

Trebor Worthen, a GOP political consultant who is running one of the dark money groups, Sooner State Leadership PAC, said it is dedicated to public safety and has raised $10 million. Worthen declined to identify specific donors.

“We are funded by business and community leaders who care deeply about our future and wish to exercise their First Amendment rights to advocate for policy changes that Oklahoma needs and deserves,” Worthen said.

The issue also has surfaced in the GOP primary for governor in Nevada. Former Sen. Dean Heller has criticized Clark County Sheriff Joe Lombardo, saying he wants to defund the police. Lombardo told The Associated Press and other media outlets that he has no problem with his department losing funding if the money is used in another area that would benefit law enforcement.

“Who goes on NPR and says they want to defund the police?” Heller told a Nevada TV station during an interview, comparing Lombardo with progressive Democrats who often draw conservative ire, including Rep. Alexandria Ocasio-Cortez. “AOC, the Squad, and Sheriff Lombardo. They’re the ones that say that.”

Among the most vocal critics is GOP candidate for governor Richard Irvin, a former prosecutor and defense attorney who is now mayor of Aurora, a Chicago suburb. Irvin, who faces several Republicans in the GOP primary, often touts his prosecutorial background as he blasts Democratic Gov. J.B. Pritzker.

The Democratic Governors Association and Irvin’s GOP rivals have questioned his tough-on-crime credentials, however. In an ad, the DGA criticized Irvin’s work as a defense attorney, and fellow Republicans have attacked Irvin, who is Black, for expressing support for Black Lives Matter.

A spokesperson for Irvin dismissed the attacks. Eleni Desmertzis said Pritzker is “running scared” and facing “a former criminal prosecutor, tough-on-crime-mayor and strong supporter of law enforcement who has proven he’s not afraid to stand up for all lives in Illinois.”

By SARA BURNETT and SEAN MURPHY

Previous Article
Recording: Johnny Depp warned of a ‘bloodbath’ to ex-wife
Next Article
Will the next Jan. 6 jury also acquit a defendant?