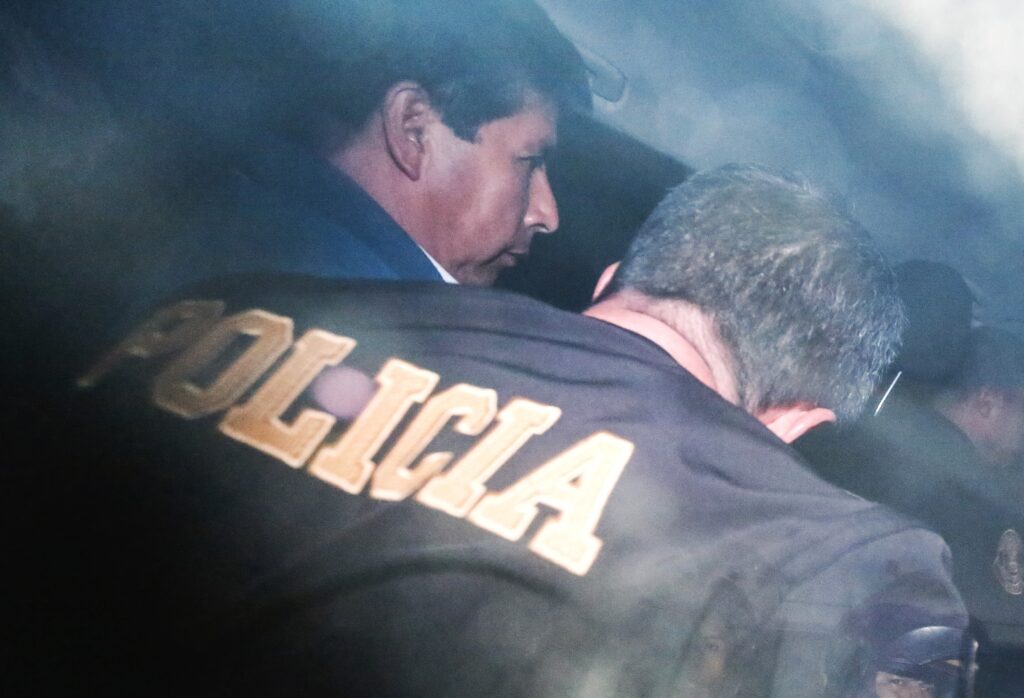 Peru’s ousted former president faces a court hearing on Thursday over his arrest while also being investigated for rebellion, as his replacement holds meetings at the presidential palace following a day of high drama that shocked the region. Pedro Castillo’s swift fall from power on Wednesday came after congressional lawmakers voted overwhelming to remove the deeply unpopular leader after his effort to dissolve Congress and rule by decree was thwarted earlier in the day. The Associated Press has the story:

Peru’s ousted President Pedro Castillo rose to power 17 months ago as a populist outsider. But he squandered what little popularity he had when he stunned the nation by dissolving Congress in an act of political suicide that recalled some of the darkest days of the nation’s anti-democratic past.

At a court appearance Thursday, a judge ordered Castillo held on charges of rebellion in the same Lima prison where Alberto Fujimori remains incarcerated 30 years after the former strongman sent tanks and soldiers in a far more forceful attempt to close the legislature.

Castillo, 53, looked downcast as he gave simple “yes” or “no” answers to the judge’s questions.

Most Peruvians took the ouster in stride, with the streets in downtown Lima calm as residents went about their business although late in the day a few hundred Castillo supporters marched peacefully through the capital.

Meanwhile, his successor, Dina Boluarte, began the difficult task of trying to rally Peruvians behind institutions gutted for years by endemic corruption and mistrust. Boluarte, a Marxist lawyer who was Castillo’s vice president, now becomes the country’s sixth president in as many years. She’s the first woman to lead the South American country of 33 million and the only one fluent in Quechua, the Indigenous language spoken by Peru’s poor.

With polls showing Peruvians despising Congress even more than they do Castillo, Boluarte appealed for a “truce” from the political feuding that has paralyzed Peru for years. As part of her effort to reorient the country, she walked back comments a day earlier that she would finish Castillo’s five-year term, which ends in 2026, and refused to rule out the possibility of holding early elections — something that requires approval of a hard-to-muster constitutional amendment.

“I know there are voices indicating early elections and this is democratically respectable,” she said.

The Biden administration condemned Castillo’s power grab as illegal and several leftist allies in Latin America have refused to speak out against his overthrow. A major exception was Mexican President Andrés Manuel López Obrador, who called Castillo’s removal a “soft coup” fueled by deep-seated racism against the former school teacher from the heavily Indigenous Andean highlands.

“It is no longer military intervention,” said López Obrador. “It’s done with control of the media by the oligarchs, undermining legal and legitimately constituted authorities, especially if they want to do something for the benefit of the long-suffering people who do not belong to the elites.”

In just three tumultuous hours Wednesday, Castillo went from decreeing the dissolution of Peru’s Congress to being replaced by his vice president.

But the threats against his government had been building throughout his nearly 17-month presidency as accusations of corruption, inexperience and incompetency forced him to shelter inside the presidential palace and a hostile Congress comprised of political elites mocked his humble roots.

Castillo won a runoff election in June 2021 by just 44,000 votes after campaigning on promises to nationalize Peru’s key mining industry and rewrite the constitution, gaining support in rural Peru.

However, once in office, he cycled through dozens of Cabinet choices, a number of whom have been accused of wrongdoing. Congress first tried to impeach him last December over an investigation by prosecutors into illicit financing of the governing party. To remove the president requires two-thirds of the 130 lawmakers to vote in favor. Only 46 did.

Lawmakers tried again in March, accusing Castillo of “permanent moral incapacity,” a term incorporated into Peruvian constitutional law that Congress has used more than a half dozen times since 2017 to try to remove presidents. The effort failed, with only 55 votes in favor.

Each time, Castillo was defiant, arguing he hadn’t done anything wrong.

“I salute that common sense, responsibility and democracy prevailed,” Castillo tweeted after the second attempt.

On Wednesday, Peru was girding for a third impeachment vote. The night before, the president said in an unusual midnight address to the nation that a sector of Congress had it out for him and that he was paying for mistakes made due to inexperience.

Then shortly before noon Wednesday, Castillo went on state television to announce the dissolution of Congress. He said elections would be held to choose new lawmakers and a new constitution would be written. Some Cabinet ministers resigned immediately, but the Supreme Court and Constitutional Tribunal rejected it as an attempted coup.

The president can dismiss lawmakers to end a political standoff but only in limited circumstances — after losing two votes of confidence in Congress, which last occurred in 2019, when then President Martin Vizcarra dismissed lawmakers.

Despite the high political drama, only small clashes have erupted between a handful of Castillo supporters and riot police on guard outside the police station in Lima where he is being held.

Boluarte, 60, will have to pursue reconciliation with a weak mandate and no party. Hanging over the political crisis is the question of what to do with Castillo.

López Obrador said Thursday that he had all but greenlighted Castillo’s request for asylum, made in a phone call Wednesday to the Mexican president’s office. But he said those plans were frustrated when Castillo was intercepted by police on his way to the Mexican Embassy in Lima, where a group of protesters awaited. Later, his foreign minister said Mexico’s ambassador met with Castillo in prison and would initiate consultations with Peruvian authorities about his asylum request.

Colombia’s President Gustavo Petro called on the Inter-American Commission on Human Rights to intervene to guarantee Castillo’s constitutional rights, saying he was unable to get a fair trial with so many powerful interests stacked against him. But echoing the comments of Brazil’s incoming president, Luiz Inacio Lula da Silva, Petro left no doubt that Castillo had brought the troubles upon himself.