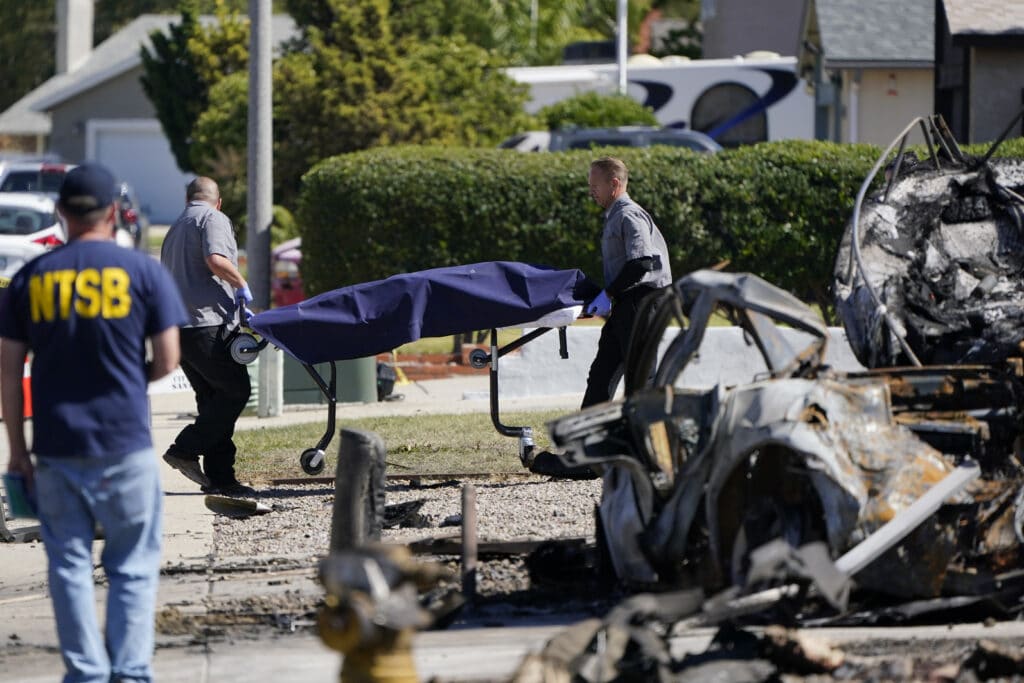 A small plane that crashed into a San Diego suburb, killing the pilot and a delivery driver, was told to climb altitude by an air traffic controller but failed to do so. The pilot verbally told the controller he was climbing. The Associated Press has the story:

Instead, the twin-engine plane plowed into a San Diego suburb, killing the pilot and a delivery driver on the ground and burning homes. Now, federal investigators must try to figure out what caused the crash that left a shocked and damaged neighborhood.

The Cessna 340 nose-dived and clipped a UPS van in Santee after noon Monday as it was preparing to land at Montgomery-Gibbs Executive Airport in San Diego.

An elderly couple suffered burns when their home went up in flames. Neighbors helped the woman out of a window. Nearly a dozen other homes in the eastern San Diego suburb were damaged.

The plane was owned and piloted by Dr. Sugata Das, a cardiologist who worked in Yuma, Arizona, and commuted to his home in San Diego, according to the website for a non-profit charity group he directed called the Power of Love Foundation.

On a recording made by LiveATC, a website that monitors and posts flight communications, an air traffic controller repeatedly warns Das that he needs to climb in altitude. He also cautioned that a C-130, a large military transport plane, was overhead and could cause turbulence.

Das responded he was aware.

The controller later is heard saying, “It looks like you’re drifting right of course, are you correcting?”

Das asks if he has been cleared for the runway. The controller says “I need you to fly,” warning him that he is coming in too low.

Das tells him he is climbing. The controller urges him to climb again, and Das says he is ascending.

“Ok. It looks like you’re descending sir. I need to make sure you are climbing, not descending,” the controller says.

Then the controller speaks with more urgency.

There is no response.

Al Diehl, a former National Transportation Safety Board investigator, said the recording indicates the pilot was trying to deal with a major distraction or significant emergency on his own — breaking a basic rule that aviators should always tell controllers everything.

“The first thing you do when you’re in trouble is call, climb and confess — and he did not do any of the three,” Diehl said. “These are very basic rules that flight instructors tell their students.”

Diehl, who helped design a Cessna cockpit, said the aircraft has a complex system that could lead to deadly mistakes.

Clouds and windy weather may have complicated Das’ ability to handle the aircraft, Diehl said. Investigators also will look at whether there could have been a medical emergency, something an autopsy should help reveal.

Diehl noted the plane at the last minute made a sweeping turn to the right as if trying to switch back to another airport that was closer because something was wrong. Das didn’t mention that to air traffic control.

Robert Katz, a certified flight instructor, said he believed Das “was totally disoriented.” Katz said the clouds were low enough that the pilot had to use an instrument landing system while approaching.

“He does not know which way is up,” Katz told CBS8 in San Diego.

Das grew up on the western coast of India and earned a medical degree from the University of Pune. He went to Yuma in 2004 and established a cardiovascular practice, according to the Power of Love Foundation. He leaves a wife and two sons.

UPS driver Steve Krueger, 61, lived in the Ocean Beach neighborhood of Ocean Beach and was on his regular route when he was killed. He planned to retire on Oct. 22, said his brother, Jeffrey Krueger.

He was immensely popular with his customers, the brother said.

“At Christmastime, he really liked sweets and they would always bombard him with stuff,” he told KNSD-TV. “They really appreciated him, and he always had fun with them. He was that kind of guy.”

“He was very much, you gotta be positive,” Jeff Kreuger said. “Things will always get better and don’t take life so serious that it gets you down. Have fun with things.”

Krueger also liked skiing and other sports. He had bought a home near Mammoth Lakes.

Krueger sent pictures of himself wearing his brown uniform and holding a UPS package while water-skiing and posing with the mammoth mascot for the Mammoth Mountain ski resort, his brother said.

On Tuesday, UPS held a moment of silence of honor of Krueger, and the flag outside a UPS customer service center in San Diego was lowered to half-staff.

“Those who knew Steve said he took pride in his work,” said a company statement, “And his positive attitude and joyful laugh made the hardest days a little lighter.”