Priest who conducted invalid baptisms now helping those he hurt 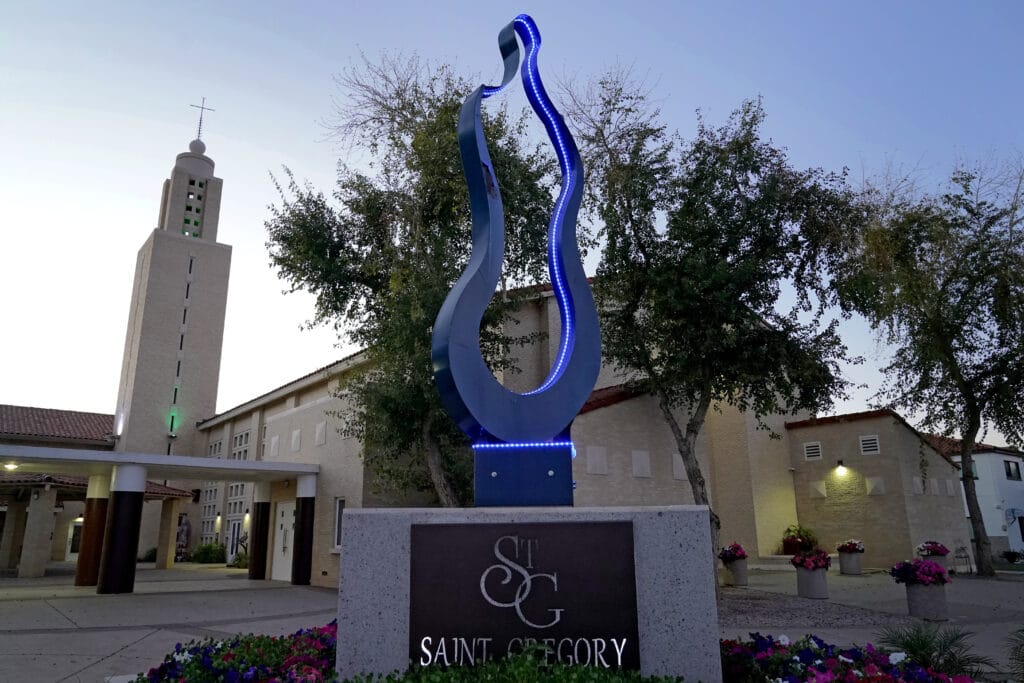 Rev. Andrés Arango is giving back to the church community that he gave erroneous baptisms to, when he declared “We baptize you” instead of “I baptize you.” He’s volunteering by launching fundraisers to pay the church’s debt, reversing a drop in membership and counseling them when they lost loved ones during the coronavirus pandemic. The Associated Press has the story:

Rev. Andrés Arango making up for the wrongs he mistakenly created

PHOENIX (AP) — Families came one by one to the baptismal font in a Phoenix church where the Rev. Andrés Arango, whose baptisms up until last summer are presumed to be invalid, poured holy water over the heads of a dozen people in a do-over of the Catholic ritual.
The ceremony Thursday evening represented a new assignment for Arango, pastor of St. Gregory Parish for nearly five years until news broke that he had repeatedly flubbed the phrasing on the initiation rite. His task now: Healing and helping those he invalidly baptized.
Thirteen-year-old Alysson Najera, who was baptized by Arango in 2009, was among the 11 children and one adult who underwent the rite again during the ceremony, this time with Arango using the church-prescribed language. Like others, she then again received Communion and was confirmed — this time as valid sacraments in the eyes of the church, which require recipients first to be baptized.
Alysson’s mother, Eliana Najera, said she doesn’t hold it against Arango that her daughter’s first baptism was invalidated. She praised him for his work over the years and questioned why the Diocese of Phoenix didn’t gather input from the community before his resignation as pastor.
“To me, he didn’t do it intentionally,” Najera said. “It was just a mistake.”

Arango’s error was in saying, “We baptize you in the name of the Father, and of the Son, and of the Holy Spirit,” when he should have begun the sentence by saying, “I baptize you.” The difference is theologically crucial, the Vatican ruled in 2020, because it’s not the “we” of the congregation doing the baptizing but the “I” of Jesus Christ, working through the priest.
Church officials estimate Arango performed thousands of baptisms that are now presumed invalid and said those affected need to valid baptisms now. It’s unclear how many people have received the sacrament again.
Technically in church theology, there’s no “again” or “rebaptism,” since baptism, as well as Confirmation and first communion, are once-in-a-lifetime rituals that can’t be repeated. “Rebaptism doesn’t exist because baptism creates an ontological change (a change in being) in a person,” said Jay Conzemius, moderator of the Diocese of Pittsburgh’s tribunal and past president of the Canon Law Society of America.
Arango told the families in the church Thursday that the do-over was a chance for the faithful to renew their commitment to God. He declined an interview request from an Associated Press reporter after the ceremony, though he thanked the journalist for attending.
Arango remains beloved among parishioners, some of whom said the error was an honest mistake that unfairly overshadows an honorable record of service and he should have been allowed to remain as leader of St. Gregory Parish.
Members of the congregation credited Arango with launching fundraisers to pay the church’s debt, reversing a drop in membership and counseling them when they lost loved ones during the coronavirus pandemic.
At the end of his final Sunday Mass at St. Gregory, Arango received a standing ovation and was carried down the aisle by parishioners who thanked him for his contributions.
“After all of this and many more positive things that he has done, launched and created … how does the diocese pay him for pronouncing an inclusive word?” parishioner Maria Moran said.
“If he made a mistake in wording, believe me, it was not intentional, it was not lack of heart, faith or education, it was a simple human mistake that I believe Jesus himself would quickly forgive,” parishioners Terri and Steve Flynn wrote via email.
“This is a travesty to be crucified for the use of WE instead of I,” they added
Another parishioner, 17-year-old Brisa Lomas, wrote a letter to Thomas Olmstead, the bishop of Phoenix, asking him to reinstate Arango at St. Gregory. She credited him for inspiring her to attend Mass and restoring her faith.
“If Jesus was in charge of The Roman Catholic Diocese of Phoenix, I know in my heart that he would forgive Father Andres for this honest mistake.” she wrote.
In a statement, the diocese acknowledged that Arango’s reassignment had upset people. “Fr. Arango is a priest in good standing and has led many people to a deeper relationship with Christ in his pastoral work at Saint Gregory Parish, but now he is committing himself to this vital and important pastoral outreach to the people of God – helping and healing,” the diocese said.
The diocese declined to say whether Arango resigned as pastor, as the priest said in a note posted on the diocese’s site. Some parishioners believe Arango was forced to quit the post.
In a petition to the diocese, parishioners requested a town hall meeting at the church to hear their views and demand answers to the diocese’s decision to invalidate thousands of sacraments. It also included a spreadsheet with hundreds of examples of how Arango positively impacted their lives.
The diocese declined to say whether it planned on holding such a meeting.
Church officials are trying to identify people baptized by Arango. It has set up an FAQ section on its website to confront issues related to the botched baptisms and created a form for people to fill out to start the process of getting valid ones.
Before serving at St. Gregory, Arango was pastor at Saint Jerome Catholic Church in Phoenix and the St. Anne Roman Catholic Parish in nearby Gilbert. Earlier, he served in San Diego and Brazil.

Associated Press religion coverage receives support through the AP’s collaboration with The Conversation US, with funding from Lilly Endowment Inc. The AP is solely responsible for this content.