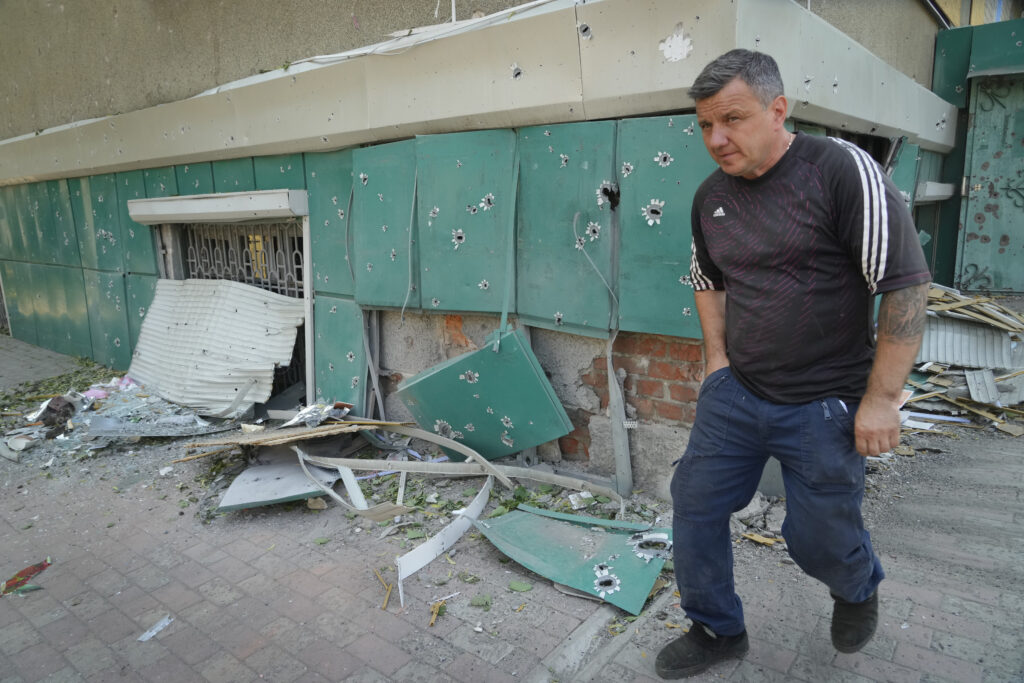 With 80% of the eastern Ukrainian city of Sievierodonetsk controlled by Russian troops, many Ukrainians are finally giving up and trying to escape, but Russia has taken over the escape routes. All three bridges accessing the city have been destroyed. The Associated Press has the story:

LVIV, Ukraine (AP) — Russian troops control about 80% of the fiercely contested eastern Ukrainian city of Sievierodonetsk and have destroyed all three bridges leading out of it but Ukrainian authorities are still trying to evacuate the wounded, a regional official said Tuesday.

Serhiy Haidai, governor of the eastern Luhansk region, acknowledged that a mass evacuation of civilians from Sievierodonetsk now is “simply not possible” due to the relentless shelling and fighting. Ukrainian forces have been pushed to the industrial outskirts of the city because of “the scorched earth method and heavy artillery the Russians are using,” he said.

“There is still an opportunity for the evacuation of the wounded, communication with the Ukrainian military and local residents,” he told The Associated Press by telephone, adding that Russian forces have not yet completely blocked off the strategic city.

About 12,000 people remain in Sievierodonetsk, from a pre-war population of 100,000. More than 500 civilians are sheltering in the city’s Azot chemical plant, which is being relentlessly pounded by the Russians, according to Haidai.

In all, 70 civilians were evacuated from the Luhansk region in the last day, the governor said.

A Russian general, meanwhile, said a humanitarian corridor will be opened Wednesday to evacuate civilians from the Azot plant. Col-Gen. Mikhail Mizintsev said evacuees would be taken to the town of Svatovo, 60 kilometers (35 miles) to the north in territory under the control of Russian and separatist forces.

He said the plan was made after Ukraine called for an evacuation corridor leading to territory it controls.

Mizintsev, head of the National Defense Management Center, is accused by Ukraine of human rights violations while commanding troops during the long siege of Mariupol, Ukraine’s key port on the Sea of Azov that has been taken over by the Russians.

Russian forces in the past few weeks have pressed hard to capture Ukraine’s eastern industrial Donbas area, which borders Russia and is made up of the regions of Luhansk and Donetsk.

“The situation is difficult,” Ukrainian President Volodymyr Zelenskyy said in a news conference Tuesday with Danish media. “Our task is to fight back.”

With the conflict now in its fourth month, the battle of Donbas could dictate the course of the war.

If Russia prevails, Ukraine will lose not only land but perhaps the bulk of its most capable military forces, opening the way for Moscow to grab more territory and dictate its terms to Kyiv.

A Russian failure, however, could lay the grounds for a Ukrainian counteroffensive — and possible political upheaval for the Kremlin.

Jan Egeland, the Secretary-General of the Norwegian Refugee Council, one of the aid organizations supplying food to civilians in the Donbas, said fighting in the past few weeks has made regular food distributions impossible. Now, he said, the remaining civilians in Sievierodonetsk “are almost entirely cut off from aid supplies after the destruction of the last bridge.”

Reports of overnight shelling came from other Ukrainian regions as well, with five people wounded in the northeastern Kharkiv region. According to an intelligence update Tuesday by the U.K. Defense Ministry, Russian forces appear to have made small advances in the Kharkiv sector for the first time in several weeks.

MORE STORIES ON THE RUSSIA-UKRAINE WAR:

— Ukrainians use humor to cope with the trauma of war

He said Tuesday the plan would involve building temporary storage silos on Ukraine’s borders to deal with the problem of the different rail gauges that Ukrainian and European railway systems use.

“Ukraine has a system, like Russia has, a rail gauge that is different than the gauge of the rest of the tracks in Europe,” Biden said. “So we’re going to build silos, temporary silos, in the borders of Ukraine, including in Poland. So we can transfer it from those cars into those silos into cars in Europe and get it out to the ocean and get it across the world. But it’s taking time.”

Ukraine is a global bread basket nation whose exports to world markets have been sharply disrupted by the war. The lack of Ukraine grain on world markets is threatening to exacerbate food shortages and inflation across the world. Many African and Middle Eastern countries rely heavily on Ukrainian grain and could face problems feeding their people without it.

Nearly two-thirds of the children in Ukraine have been uprooted during the war, according to a U.N. official who visited the country last week.

“The war in Ukraine is a child rights crisis,” Afshan Khan told a news briefing Tuesday. She’s the Europe and Central Asia director for UNICEF, the U.N. children’s agency.

Khan said 277 children in Ukraine have been killed and another 456 injured, mostly due to explosives used in urban areas. She said the number of damaged schools is likely in the thousands, and only about 25% of schools in Ukraine are even operational.

Millions of Ukrainian women and children have fled the country since the Russian invasion in February.

French President Emmanuel Macron arrived in Romania on Tuesday to hold bilateral talks and meet with French troops stationed there who are part of NATO’s response to Russia’s invasion of Ukraine.

Macron’s visit to Romania, a European Union member since 2007 and a NATO member since 2004, marked the beginning of a regional tour that includes a visit Wednesday to non-NATO Moldova. Both countries share long borders with embattled Ukraine.

“Nobody knows what is in store for us in the coming weeks and months, but we will do all we can to put an end to the Russian invasion, to help Ukrainians and continue with negotiations,” Macron said at the eastern Mihail Kogalniceanu air base, where he was greeted by Romanian Prime Minister Nicolae Ciuca.

In a brief address to French soldiers deployed at the NATO base, Macron praised them for “honoring our commitment to defend Europe as war is being waged again.”

France has around 500 soldiers deployed in Romania and has been a key player in NATO’s bolstering of forces on the alliance’s eastern flank following Russia’s invasion.

The Kremlin says Russia would be ready to consider a UK appeal over the fate of two Britons sentenced to death for fighting for Ukraine.

Kremlin spokesman Dmitry Peskov said neither Moscow nor the pro-Russian separatists in eastern Ukraine who passed the sentence had heard from London on the issue.

“You need to apply … to the authorities of the country whose court passed the verdict, and that is not the Russian Federation,” Peskov said. “But, of course, everything will depend on appeals from London. And I am sure that the Russian side will be ready to listen.”

Britons Aiden Aslin and Sean Pinner, and Moroccan national Brahim Saadoun, were sentenced to death last week for allegedly fighting as mercenaries for Ukraine in the self-proclaimed Donetsk People’s Republic. London called the proceedings “a sham.”

Separatist authorities said all three had a month to appeal their sentence. Kyiv has pledged to try to secure their release through a prisoner swap with Russia.

Russian natural gas deliveries through a key pipeline to Europe will drop by around 40% this year, state-controlled energy giant Gazprom said Tuesday, after Canadian sanctions over the war in Ukraine prevented German partner Siemens Energy from delivering overhauled equipment.

Germany’s utility network agency said it did not see gas supplies as endangered and that reduced flows through the Nord Stream 1 pipeline under the Baltic Sea aligned with commercial behavior and Russia’s previously announced cutoff of gas to Denmark and the Netherlands, the German news agency dpa reported. The Federal Network Agency said it was monitoring the situation.

Spot gas prices rose in Europe, a sign of jitters over possible further effects of the war on supplies of Russian gas, which powers industry and generates electricity on the continent.

The European Union has outlined plans to reduce dependence on Russian gas by two-thirds by year’s end. Economists say a complete cutoff would deal a severe blow to the economy, consumers and gas-intensive industries.

Russia’s foreign ministry says it has banned dozens of British media and defense figures from entering the country.

A statement on the ministry website Tuesday said the ban on 29 journalists and commentators was a response to what it claimed was the British media’s “deliberate dissemination of false and one-sided information” on Russia and its war in Ukraine.

The list included senior editors and correspondents for the BBC and the Times and Guardian newspapers.

The prime ministers of NATO members Albania and Montenegro are heading for Kyiv after an invitation from Ukrainian President Volodymyr Zelenskyy.

Albania’s Edi Rama announced the trip on social media, with a photo of him boarding a plane Tuesday accompanied by Montenegro’s Dritan Abazovic.

Both Balkan countries have denounced Russia’s invasion of Ukraine and joined the sanctions against Moscow.

Ukrainian authorities said Tuesday they had have received the remains of 64 defenders of the Azovstal steel plant in Mariupol in the latest body swap with Russia.

The statement by the Ministry for Reintegration of Occupied Territories said the exchange took place in the Zaporizhzhia region, but didn’t clarify how many bodies were returned to Russia.

It was one of the several swaps the warring sides have conducted. Earlier this month Moscow and Kyiv exchanged 160 bodies each. There was no immediate confirmation from Moscow on the swap reported by Ukraine on Tuesday.