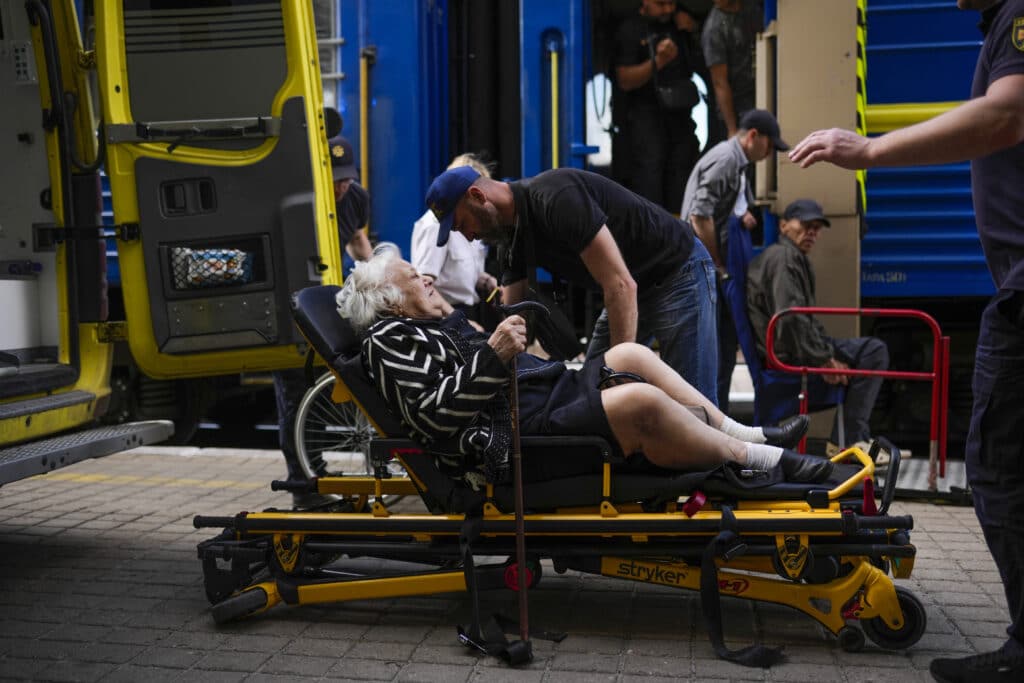 Negotiating narrow apartment building staircases, volunteers carry the elderly and infirm in their arms, in stretchers or in wheelchairs to waiting minibuses, sometimes just steps away from the Russians, which then drive them to central staging areas, and on from there to other cities and eventually out of the country to another nation that is showing its kindness to want to help. Bakhmut is an extremely high-risk area right now, and the intense focus is getting as many people out and to relative safety, as fast as volunteers can, and hoping they can escape the Russian onslaught. As reported by the AP:

Ukrainian and foreign volunteers are working with the Ukrainian charity Vostok SOS, which is coordinating the evacuation effort

Negotiating narrow apartment building staircases, volunteers carry the elderly and infirm in their arms, in stretchers or in wheelchairs to waiting minibuses, which then drive them to central staging areas and eventually to evacuation trains in other cities, with the Russians on their heels.

“The Russians are right over there, and they’re closing in on this location,” Mark Poppert, an American volunteer working with British charity RefugEase, said during an evacuation in the town of Bakhmut on Friday.

“Bakhmut is a high-risk area right now,” he said. “We’re trying to get as many people out as we can in case the Ukrainians have to fall back.”

He and other Ukrainian and foreign volunteers working with the Ukrainian charity Vostok SOS, which was coordinating the evacuation effort, were hoping to get about 100 people out of Bakhmut on Friday, Poppert said.

A few hours earlier, the thud of artillery sounded, and black smoke rose from the northern fringes of the town, which is in the Donetsk region in Ukraine’s industrial east. Donetsk and the neighboring region of Luhansk makes up the Donbas, where Moscow-backed separatists have controlled some territory for eight years.

The Ukrainian evacuation process is painstaking, physically arduous and fraught with emotion.

Many of the evacuees are elderly, ill or have serious mobility problems, meaning volunteers have to bundle them into soft stretchers and slowly negotiate their way through narrow corridors and down flights of stairs in apartment buildings.

Most people have already fled Bakhmut: only around 30,000 remain from a pre-war population of 85,000. And more are leaving each day.

Fighting has raged north of Bakhmut as Russian forces intensify their efforts to seize the key eastern cities of Sieverodonetsk and Lysychansk, 50 kilometers (30 miles) to the northeast. The two cities are the last areas under Ukrainian control in the Luhansk region.

Northwest of Bakhmut in Donetsk, Russia-backed rebels said Friday they had taken over the town of Lyman, a large railway hub near the cities of Slovyansk and Kramatorsk, both which are still under Ukrainian control. On Thursday, smoke rising from the direction of Lyman could be seen clearly from Slovyansk.

But even when faced with shelling, missiles, and an advancing Russian army, leaving isn’t easy.

Svetlana Lvova, the 66-year-old manager for two apartment buildings in Bakhmut, huffed and rolled her eyes in exasperation upon hearing that yet another one of her residents was refusing to leave.

“I can’t convince them to go,” she said. “I told them several times if something lands here, I will be carrying them — injured — to the same buses” that have come to evacuate them now.

She’s tried to persuade the holdouts every way she can, she says, but nearly two dozen people just won’t budge. They’re more afraid to leave their homes and belongings for an uncertain future than to stay and face the bombs.

She herself will stay in Bakhmut with her husband, she said. But not because they fear leaving their property. They are waiting for their son, who is still in Sieverodonetsk, to come home.

“I’m not going anywhere,” she said. “I have to know he is alive. That’s why I’m staying here.”

Lvova plays the last video her son sent her, where he tells his mother that he is fine, and that they still have electricity in the city but no longer running water.

“I baked him a big cake,” she said, wiping away tears.

Poppert, the American volunteer, said it was not unusual to receive a request to pick people up for evacuation, only for them to change their minds once the van arrives.

“It’s an incredibly difficult decision for these people to leave the only world that they know,” he said.

He described one man in his late 90s evacuated from the only home he had ever known.

In nearby Pokrovsk, ambulances pulled up to offload elderly women in stretchers and wheelchairs for the evacuation train heading west, away from the fighting. Families clustered around, dragging suitcases and carrying pets as they boarded the train.

The train slowly pulled out of the station, and a woman drew back the curtain in one of the train carriages. As the familiar landscape slipped away, her face crumpled in grief and the tears began to flow.

By ELENA BECATOROS and NICOLAE DUMITRACHE

Previous Article
Algerian dissidents: Victims of crackdown, or outlaws?
Next Article
Cannes festival to wrap with presentation of Palme d’Or