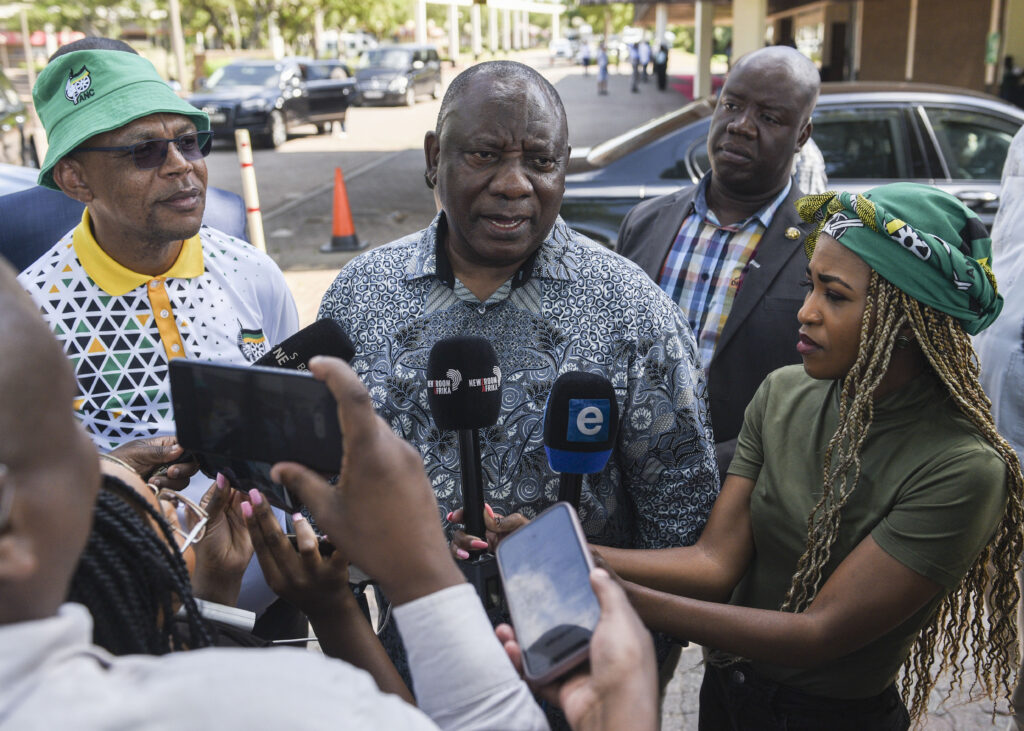 South African President Cyril Ramaphosa has said his fate is in his party’s hands, in his first comments since an official report on a scandal over money stolen from his farm. Opponents have called for his resignation after a panel of legal experts concluded he may have broken the law. The Associated Press has the story:

South African President Cyril Ramaphosa looked relaxed and shared a joke with journalists as he made a brief appearance Sunday at a meeting of the African National Congress party’s national working committee, which is discussing his political fate.

Ramaphosa‘s future hangs in the balance as he faces calls from within the ANC and from opposition parties to step down from his position amid a scandal involving the president’s animal farm.

Ramaphosa was recused from Sunday’s meeting of the ruling ANC, which came days after an independent parliamentary panel issued a report that suggested he may have broken anti-corruption laws.

The report follows a criminal complaint laid by the country’s former head of intelligence, Arthur Fraser, who has accused Ramaphosa of money laundering related to the theft of a large sum of cash from his farm in 2020.

The president has denied any wrongdoing in the matter. Addressing journalists briefly on Sunday, he noted it was ANC tradition that someone should be recused from a meeting that deals with issues that affect them personally.

However, Ramaphosa confirmed he planned to attend a Monday meeting of ANC’s national executive committee, its highest decision-making body within conferences. The executive committee is tasked with making a final decision on Ramaphosa’s future in the party.

“Tomorrow I will attend the national executive committee meeting as well, that is how everything will flow. After that it is up to the NEC, to which I am accountable, to make a decision,” Ramaphosa said.

Ramaphosa’s spokesman, Vincent Magwenya did not respond to questions Sunday regarding reports that Ramaphosa had no intention of resigning from his position and planned to challenge the findings of the report.

South African lawmakers are expected to debate the independent report on Tuesday and then vote on whether further action should be taken against the president, including whether to proceed with impeachment proceedings.

The report questioned his explanation that the money was from the sale of buffaloes to a Sudanese businessman, asking why the animals remained at the farm more than two years later.

It also said Ramaphosa put himself into a situation of conflict of interest, saying the evidence presented to it “establishes that the president may be guilty of a serious violation of certain sections of the constitution.”

Previous Article
Kylian Mbappé, France past Poland 3-1 at World Cup
Next Article
Trump rebuked for call to Suspend US Constitution