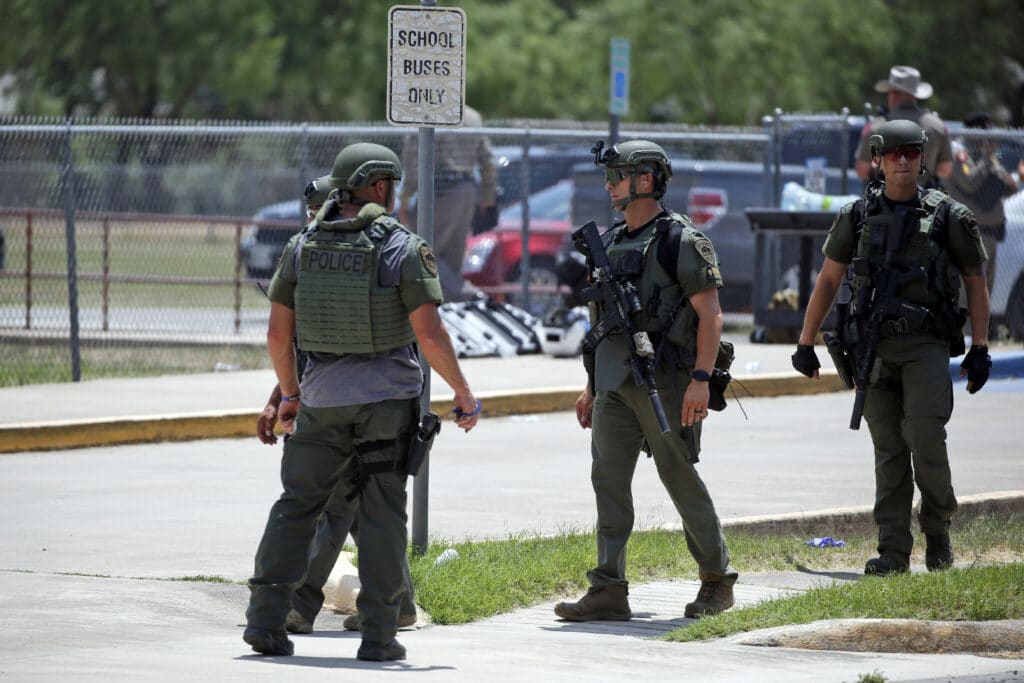 It is a sad and tragic situation with this school shooting in Uvalde, so far, the total count dead is 18 children and 1 adult, the shooter is also dead, and instead of giving parents, the community, and the nation time to mourn and grieve the losses, President Joe Biden launched into a tirade about gun control and stopping the NRA. The president is right, there is something that needs to be done, but banning something that law abiding citizens own, or restricting the rights of people who had nothing to do with this tragedy, is the wrong direction. We need to find these people who commit these acts help before they go on their rampages. As reported by the AP:

Lawmakers are unlikely to adopt any significant new limits on guns, because guns are not the problem, it runs much deeper than that

Past shootings targeted worshippers during a Sunday sermon, shoppers at a Walmart, students on a high school campus and drivers on a highway. Among the latest victims were 19 children in the small town of Uvalde, west of San Antonio, where on Tuesday a gunman opened fire inside an elementary school in the nation’s deadliest school shooting in nearly a decade.

Each of those tragedies in Texas — which resulted in more than 85 dead in all — occurred in the last five years.

But as the horror in Uvalde plunges the U.S. into another debate over gun violence, Texas and the state’s Republican-controlled government have by now demonstrated what is likely to happen next: virtually nothing that would restrict gun access.

Lawmakers are unlikely to adopt any significant new limits on guns. Last year, gun laws were actually loosened after a gunman at a Walmart in El Paso killed 23 people in a racist 2019 attack that targeted Hispanics.

“I can’t wrap my head around it,” said state Sen. Roland Gutierrez, a Democrat whose district includes Uvalde. “It’s disturbing to me as a policymaker that we have been able to do little other than create greater access to these militarized weapons to just about anyone who would want them.”

Republican Texas Gov. Greg Abbott identified the gunman as 18-year-old Salvador Ramos. Two other adults also died in the attack. The gunman was killed by authorities.

The cycle in Texas — a mass shooting followed by few if any new restrictions on guns — mirrors GOP efforts to block stricter laws in Congress and the ensuring outrage from Democrats and supporters of tougher gun control.

President Joe Biden angrily made a renewed push Tuesday evening after the tragedy in Uvalde. “When in God’s name are we going to stand up to the gun lobby?” he asked in an address from the White House.

The shooting in Texas happened days before the National Rifle Association is set to hold its annual meeting in Houston, where Abbott and other Republican leaders are scheduled to speak.

Even as Biden’s party has slim control of Congress, gun violence bills have stalled in the face of Republican opposition in the Senate. Last year, the House passed two bills to expand background checks on firearms purchases, but both languished in the 50-50 Senate where Democrats need at least 10 Republican votes to overcome objections from a filibuster.

“It sort of centers around the issue of mental health. It seems like there’s consensus in that area,” No. 2 Senate GOP leader John Thune said about how Congress should respond to the Uvalde shooting. He did not specify what that would be.

In Texas, any changes to gun access would not come until lawmakers return to the Capitol in 2023. In the past, calls for action have faded.

Abbott, who is up for reelection in November, said the shooting in Uvalde was carried out “horrifically, incomprehensibly” on children. He did not immediately say how or whether Texas would respond to this latest mass shooting on a policy level, but since he became governor in 2015, the state has only gotten more relaxed when it comes to gun laws.

Exactly one year before the Uvalde shooting, the GOP-controlled Legislature voted to remove one of the last major gun restrictions in Texas: required licenses, background checks and training for the nearly 1.6 million registered handgun owners in the state at the time.

Abbott signed the measure, which came at the end of what was the Texas Legislature’s first chance to act after the Walmart attack.

A year later, a man went on a highway shooting rampage in the West Texas oil patch that left seven people dead, spraying bullets into passing cars and shopping plazas and killing a U.S. Postal Service employee while hijacking her mail truck.

Following a shooting at Santa Fe High School in 2018 that killed 10 people near Houston, Abbott signaled support for so-called red flag laws, which restrict gun access for people deemed dangerous to themselves or others. But he later retreated amid pushback from gun-rights supporters.

Republican Texas Attorney General Ken Paxton, who won the GOP nomination for a third term Tuesday, told Fox News after the Uvalde shooting that the best response would be training teachers and “hardening” schools.

Democrat state Rep. Joe Moody recalled the hope he felt that the Walmart shooting in his border city might finally lead to reforms.

“And the only answer you get when we go to the Capitol is, ‘More guns, less restrictions,'” Moody said. “That’s it.'”

Writers Alan Fram and Lisa Mascaro in Washington contributed to this report.