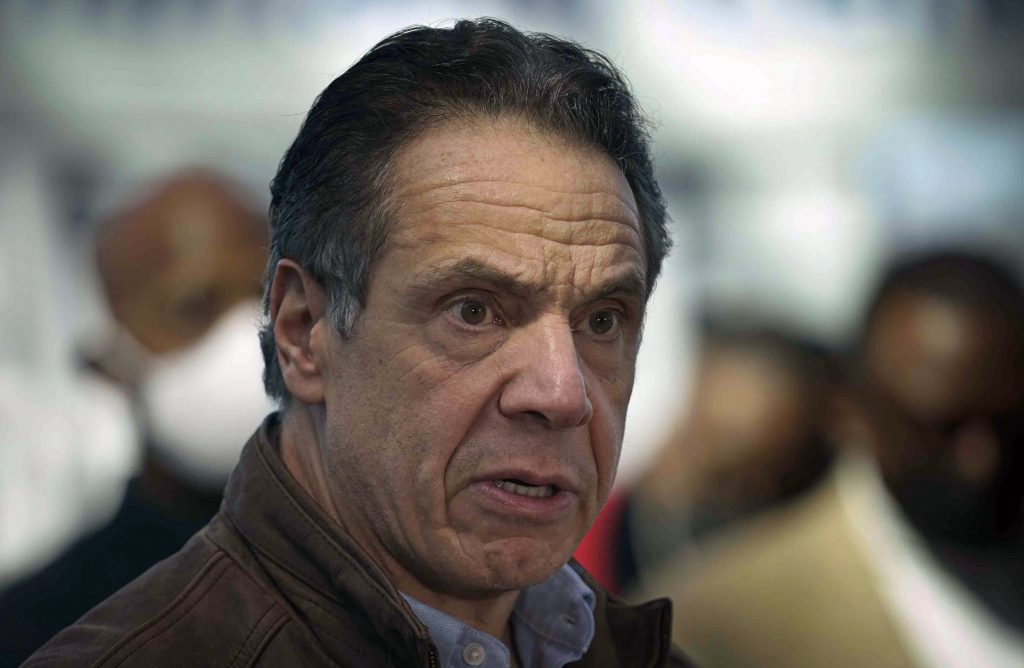 ALBANY, N.Y. (AP) — Facing unprecedented political isolation, a defiant New York Gov. Andrew Cuomo insisted on Friday that he would not step down in the wake of sexual harassment allegations and condemned the expansive coalition of Democrats calling for his resignation as “reckless and dangerous.”

By day’s end, the three-term Democratic governor had lost the support of almost his state’s entire congressional delegation. None of the defections hurt more than those of New York’s two U.S. senators, Senate Majority Leader Chuck Schumer and Sen. Kirsten Gillibrand.

“Due to the multiple, credible sexual harassment and misconduct allegations, it is clear that Governor Cuomo has lost the confidence of his governing partners and the people of New York,” the Democratic senators wrote in a joint statement. “Governor Cuomo should resign.”

Hours before the statement, Cuomo, a leading critic of former President Donald Trump’s coronavirus pandemic response, evoked the Republican in defending himself against “cancel culture.”

“I’m not going to resign,” Cuomo said during an afternoon phone call with reporters. “I did not do what has been alleged. Period.”

He added: “People know the difference between playing politics, bowing to cancel culture and the truth.”

The embattled governor’s comments came on the day his party in New York and beyond turned sharply against him following allegations of harassment as well as sweeping criticism of Cuomo for keeping secret how many nursing home residents died of COVID-19 for months.

Cuomo’s growing list of detractors now covers virtually every region in the state and the political power centers of New York City and Washington. A majority of Democrats in the state legislature and all but a handful of the state’s 29-member congressional delegation have called on him to step down.

The escalating political crisis jeopardizes Cuomo’s 2022 reelection in an overwhelmingly Democratic state, and threatens to cast a cloud over President Joe Biden’s early days in office. Republicans across the country have seized on the scandal to try to distract from Biden’s success with the pandemic and challenge his party’s well-established advantage with female voters.

The senators’ statement, which cited the pandemic as a reason for needing “sure and steady leadership,” came shortly after Schumer stood alongside Biden in a Rose Garden ceremony celebrating the passage of the Democrat-backed $1.9 trillion pandemic relief bill.

White House press secretary Jen Psaki on Friday declined to say whether Biden believes Cuomo should resign. She said every woman who has come forth about harassment by the New York governor “deserves to have her voice heard, should be treated with respect and should be able to tell her story.”

Dozens of Democrats had already called on Cuomo to resign this week, but the coalition of critics expanded geographically and politically on Friday to include the likes of New York City progressive U.S. Rep. Alexandria Ocasio-Cortez; the leader of the House Democratic campaign arm, U.S. Rep. Sean Patrick Maloney; Buffalo-based U.S. Rep. Brian Higgins; and a group of Long Island-based state lawmakers who had been Cuomo loyalists.

Never before has the brash, 63-year-old Democratic governor — the son of a New York governor himself — been more politically alone.

“The victims of sexual assault concern me more than politics or other narrow considerations, and I believe Governor Cuomo must step aside,” Maloney said.

Ocasio-Cortez said she believes the women who accused Cuomo of wrongdoing.

“After two accounts of sexual assault, four accounts of harassment, the Attorney General’s investigation finding the Governor’s admin hid nursing home data from the legislature and public, we agree with the 55+ members of the New York State legislature that the Governor must resign,” she tweeted.

Cuomo on Friday insisted that he never touched anyone inappropriately, and said again that he’s sorry if he ever made anyone uncomfortable. He declined to answer a direct question about whether he’s had a consensual romantic relationship with any of the women.

“I have not had a sexual relationship that was inappropriate, period,” he said.

The governor in recent days has been calling lawmakers and supporters asking them to refrain from calling for his resignation, and instead support the ongoing investigations. His strategy does not appear to be working.

The state Assembly allowed an impeachment investigation into Cuomo on Thursday as lawmakers investigate whether there are grounds for his forcible removal from office.

The firestorm around the governor grew after the Times Union of Albany reported Wednesday that an unidentified aide had claimed Cuomo reached under her shirt and fondled her at his official residence late last year.

The woman hasn’t filed a criminal complaint, but a lawyer for the governor said Thursday that the state reported the allegation to the Albany Police Department after the woman involved declined to do so herself.

Additionally, Cuomo is facing multiple allegations of sexually suggestive remarks and behavior toward women, including female aides. One aide said he asked her if she would ever have sex with an older man. And another aide claimed the governor once kissed her without consent, and said governor’s aides publicly smeared her after she accused him of sexual harassment.

Rarely in the modern era has a leading elected official survived such a political backlash from his own party, but there is precedent.

Former South Carolina Gov. Mark Sanford, a Republican, refused to resign in 2009 after a scandal involving an extramarital affair. He would go on to serve in Congress. And in 2019, Virginia’s Democratic Gov. Ralph Northam resisted sweeping calls for his resignation after a photo emerged of him in a racist costume. Northam is still in office.

Cuomo on Friday vowed that he’d still be able to govern despite a growing list of New York elected officials who say they’ve lost faith in his ability to govern.

He didn’t address the reality of an increasingly untenable position: Cuomo is seeking a fourth term next year, managing the state’s pandemic response and negotiating a state budget with state lawmakers who’ve lost confidence in his leadership.

He again raised questions about the motives of women accusing him of inappropriate behavior.

“A lot of people allege a lot of things for a lot of reasons,” he said Friday. “I won’t speculate about people’s possible motives. But I can tell you as a former attorney general who has gone through this situation many times, there are often many motivations for making an allegation. And that is why you need to know the facts before you make a decision.”

“Serious allegations should be weighed seriously, right?” he said. “That’s why they are called serious.”

But dozens of Democrats have already determined the allegations are serious enough to warrant his immediate removal. Other Republicans in New York’s congressional delegation previously called for Cuomo’s resignation, including Nicole Malliotakis, Elise Stefanik, Claudia Tenney and Lee Zeldin.

“The repeated accusations against the governor, and the manner in which he has responded to them, have made it impossible for him to continue to govern at this point,” Nadler said.

Previous Article
‘Obamacare’ boost easy for some, but others face paperwork
Next Article
Myanmar court extends detention of AP journalist