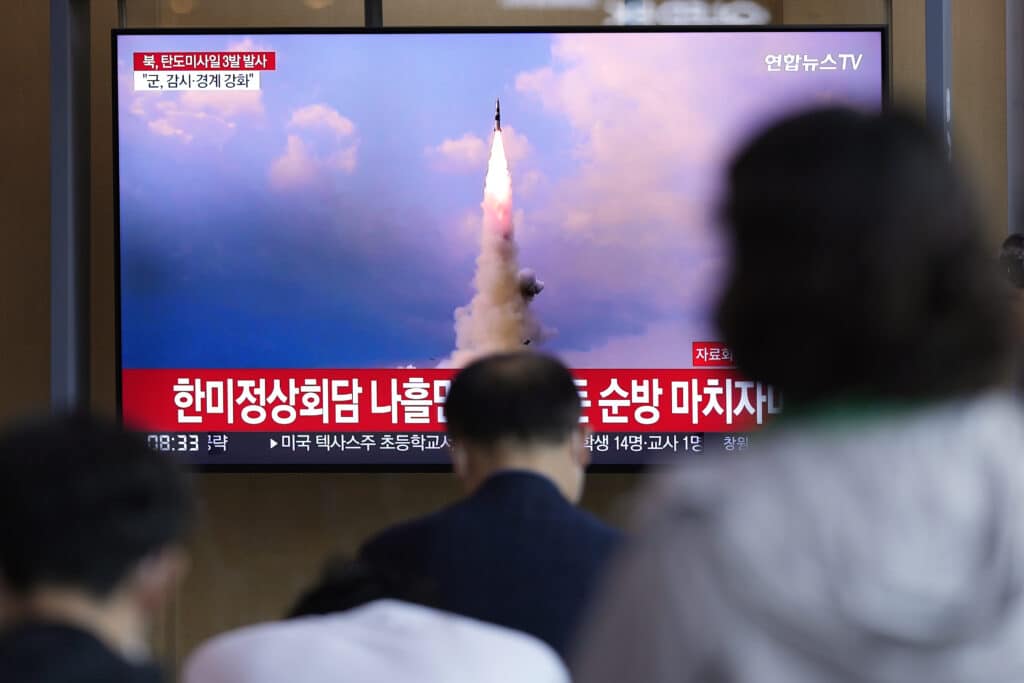 The suspected ICBM didn’t fly its full range. But if confirmed, it would still be North Korea’s first test of an ICBM system in about two months amid stalled nuclear diplomacy with the United States. North Korea’s sustained provocations can only result in stronger and faster South Korea-U.S. combined deterrence and can only deepen North Korea’s international isolation, but Kim Jong Un only cares about flexing his countries limited muscle, and God forbid and of those tests go wrong and land in a populated Western allied area. As reported by the AP:

SEOUL, South Korea (AP) — North Korea test-launched a suspected intercontinental ballistic missile and two shorter-range weapons toward its eastern waters Wednesday, South Korea said, hours after President Joe Biden ended a trip to Asia where he reaffirmed the U.S. commitment to defend its allies in the face of the North’s nuclear threat.

The suspected ICBM didn’t fly its full range. But if confirmed, it would still be North Korea’s first test of an ICBM system in about two months amid stalled nuclear diplomacy with the United States. The launch suggests the North is determined to continue its efforts to modernize its weapons arsenal despite its first COVID-19 outbreak, which has caused outside worries about a humanitarian disaster.

“The North’s sustained provocations can only result in stronger and faster South Korea-U.S. combined deterrence and can only deepen North Korea’s international isolation,” the South Korean government said in a statement after an emergency security meeting.

According to South Korea’s military, the three missiles lifted off from the North’s capital region one after another on Wednesday morning.

Kim Tae-hyo, South Korea’s deputy national security adviser, told reporters that the first missile was assessed as the North’s biggest Hwasong-17 missile, whose potential range includes the entirety of the U.S. mainland. He said the missile was fired at a high angle and that its launch appeared aimed at reviewing the weapon’s propellant and stage separations, though he couldn’t conclusively say whether the test was successful.

He said the tests of the two other missiles, both short-range weapons, implied North Korea’s intention to improve its ability to launch nuclear strikes on its rivals.

While the North Korean launches were part of its weapons development program, they were also strategically timed to the end of Biden’s Asian tour and likely designed to test the readiness of the South’s new government, which took office about two weeks ago, Kim said.

The flight details for the suspected ICBM were similar to those of two previous North Korean launches this year, which the South Korean and U.S. militaries have said were meant to test components of the Hwasong-17 missile in launches that flew medium distances, not the full range. North Korea said at the time it launched rockets to test cameras for a spy satellite.

After the two launches, South Korea’s military in March detected what it said was a North Korean Hwasong-17 missile that blew up soon after lift-off. Later in the month, North Korea claimed to have successfully launched the Hwasong-17 in its first full-range ICBM flight test that broke its self-imposed 2018 moratorium on long-distance launches.

South Korea said North Korea may have fired a smaller ICBM, not a Hwasong-17. Whichever it was, the missile flew longer and higher than any other weapon the North has ever tested, experts say.

Chang Young-keun, a missile expert at Korea Aerospace University in South Korea, said the North’s two earlier launches prior to its exploded missile were likely aimed at testing clustered engines. Given that, he said he doubts whether North Korea truly launched an ICBM again Wednesday because the country would have no reason to conduct the same test repeatedly and waste an ICBM that costs about 10-20 billion won ($8-16 million).

Chang said the flight details of the third missile resemble those of the hypersonic missile that North Korea tested in January. Other analysts say it could also be the North’s highly maneuverable, nuclear-capable KN-23 missile.

There’s less ambiguity about what North Korea was trying to show by mix-launching an ICBM and short-range missile. After Biden recently stressed America’s commitment to defend South Korea and Japan during his visits to those countries, North Korea responded by demonstrating its pursuit of an ability to conduct nuclear attacks on both the U.S. mainland and its allies in Asia, according to Lee Choon Geun, an honorary research fellow at South Korea’s Science and Technology Policy Institute.

Biden and Yoon said after their meeting Saturday that they would consider expanded military exercises to deter North Korean nuclear threats.

Biden brushed aside questions about any possible provocation by North Korea during his trip, saying, “We are prepared for anything North Korea does.” Biden later met with Japanese Prime Minister Fumio Kishida in Tokyo, and they vowed to work closely to address security challenges, including North Korea’s nuclear and ballistic programs and what they called China’s “increasingly coercive” behavior in the region.

Wednesday’s launches were the North’s 17th round of missile firings this year. Experts have said North Korea wants to move ahead with its push to expand its weapons arsenals and apply more pressure on its rivals to wrest sanctions relief and other concessions amid dormant nuclear diplomacy.

Before Wednesday, North Korea’s most recent missile tests occurred on May 12, hours after the country acknowledged a COVID-19 outbreak.

The country in the past few days has said there has been “a positive sign” in its anti-virus campaign. Since admitting to the outbreak, North Korea has identified about 3 million cases of an unidentified fever but said only 68 people died, an extremely low death toll for COVID-19.

Experts say North Korea has limited health resources and may be underreporting mortalities to prevent possible political damage to Kim.

North Korea has so far ignored South Korean, and U.S. offers to send vaccines, medicines and other support items. Much of the North’s 26 million people remain unvaccinated and the country’s once-free socialist public health care system has been in shambles for decades.

“At a time when North Korean people are suffering the pain of a COVID-19 spread, North Korea is using its crucial resources to develop nuclear weapons and missiles instead of measures to fight the virus and improve livelihoods, which is very regrettable,” South Korean Foreign Minster Park Jin said.

By HYUNG-JIN KIM and KIM TONG-HYUNG

Writer Mari Yamaguchi contributed to this report from Tokyo.