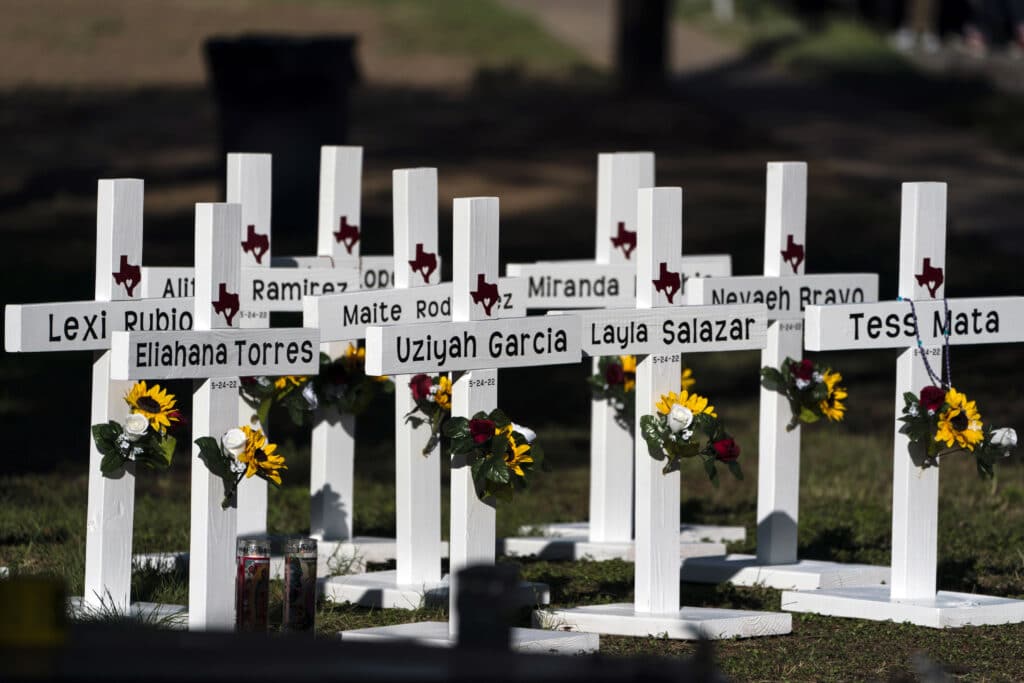 The Shooter in Uvalde left digital trails that hint at what was to come long before, and right up to the moment he actually pulled the trigger, and social media is perfectly happy with restricting political posts and banning people like Donald Trump, yet they shrug their digital shoulders and act innocent when asked if they could do more to help identify potential problems with evil people. Politicians are laser beamed focused right now on new gun laws which only affect law-abiding citizens who have not, nor ever will commit a crime of any kind. It is time that social media is held accountable, and that should extend to those who witness potentially violent posts from individuals bent on causing human destruction. As reported by the AP:

The foreboding posts, however, are often lost in an endless grid of Instagram photos that feature firearms, and those kinds of pictures should be banned by social media

Washington (AP) — The warning signs were there for anyone to stumble upon, days before the 18-year-old gunman entered a Texas elementary school and slaughtered 19 children and two teachers.

There was the Instagram photo of a hand holding a gun magazine, a TikTok profile that warned, “Kids be scared,” and the image of two AR-style semi-automatic rifles displayed on a rug, pinned to the top of the killer’s Instagram profile.

“When somebody starts posting pictures of guns they started purchasing, they’re announcing to the world that they’re changing who they are,” said Katherine Schweit, a retired FBI agent who spearheaded the agency’s active shooter program. “It absolutely is a cry for help. It’s a tease: can you catch me?”

The foreboding posts, however, are often lost in an endless grid of Instagram photos that feature semi-automatic rifles, handguns, and ammunition. There’s even a popular hashtag devoted to encouraging Instagram users to upload daily photos of guns with more than 2 million posts attached to it.

For law enforcement and social media companies, spotting a gun post from a potential mass shooter is like sifting through quicksand, Schweit said. That’s why she tells people not to ignore those type of posts, especially from children or young adults. Report it, she advises, to a school counselor, the police or even the FBI tip line.

Increasingly, young men have taken to Instagram, which boasts a thriving gun community, to drop small hints of what’s to come with photos of their own weapons just days or weeks before executing a mass killing.

Before shooting 17 students and staff members dead at Marjory Stoneman Douglas High School in 2018, Nikolas Cruz posted on YouTube that he wanted to be a “professional school shooter” and shared photos of his face covered, posing with guns. The FBI took in a tip about Cruz’s YouTube comment but never followed up with Cruz.

In November 15-year-old Ethan Crumbley shared a photo of a semi-automatic handgun his dad had purchased with the caption, “Just got my new beauty today,” days before he went on to kill four students and injure seven others at his high school in Oxford Township, Michigan.

On May 20, the day that law enforcement officials say Ramos purchased a second rifle, a picture of two AR-style semi-automatic rifles appeared on his Instagram. He tagged another Instagram user with more than 10,000 followers in the photo. In an exchange, later shared by that user, she asks why he tagged her in the photo.

“I barely know you and u tag me in a picture with some guns,” the Instagram user wrote, adding, “It’s just scary.”

The school district in Uvalde had even spent money on software that, using geofencing technology, monitors for potential threats in the area.

Ramos, however, didn’t make a direct threat in posts. Having recently turned 18, he was legally allowed to own the weapons in Texas.

That makes it difficult for platforms to separate people posting gun photos as part of a hobby from those with violent intent, said Sara Aniano, a social media and disinformation researcher, most recently at Monmouth University.

“In a perfect world, there would be some magical algorithm that could detect a worrisome photo of a gun on Instagram,” Aniano said. “For a lot of reasons, that’s a slippery slope and impossible to do when there are people like gun collectors and gunsmiths who have no plan to use their weapon with ill intent.”

Meta said it was working with law enforcement officials Wednesday to investigate Ramos’ accounts. The company declined to answer questions about reports it might have received on Ramos’ accounts.