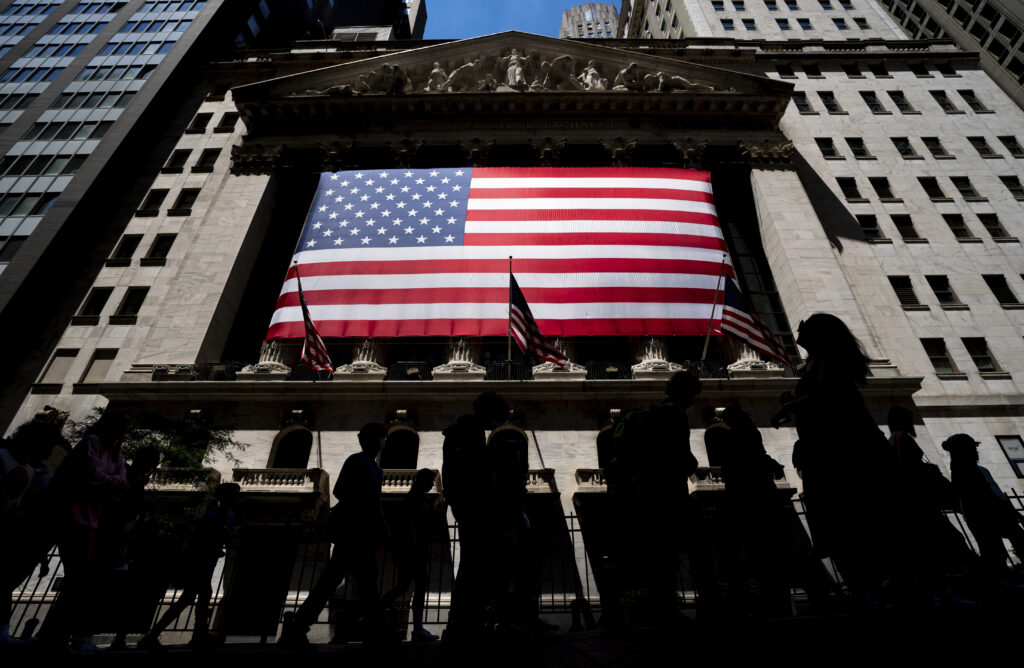 Things aren’t looking so good for the stock market right now, with a mediocre day today and everything pointing to a fourth monthly loss this year. Trading has been volatile all week. The Associated Press has the story:

(AP) Stock indexes on Wall Street ended mostly lower Wednesday after another choppy day of trading as the market heads toward its fourth monthly loss this year.

The S&P 500 ended 0.1% lower after shifting between small gains and losses. The Dow Jones Industrial Average eked out a 0.3% gain, while the Nasdaq composite slipped less than 0.1%.

Trading has been volatile all week amid growing signs the economy could be in for a recession under the pressure of stubbornly high inflation and sharply higher interest rates.

Investors snapped up U.S. government bonds, sending yields lower. The yield on the 10-year Treasury, which influences rates on mortgages and other consumer loans, fell to 3.10% from 3.20% late Tuesday, a big move.

“Lower yields because we’ve got more economic risk is not a good thing for the market,” said Willie Delwiche, investment strategist at All Star Charts. “It’s on the bulls to prove that they can sustain some strength beyond a few days or a one-week rally.”

Investors have been closely watching economic data as they try to determine how deeply inflation is hurting consumers and businesses, while also keeping an eye on the Federal Reserve’s aggressive shift to raise interest rates.

The central bank is raising rates in an attempt to slow economic growth enough to temper inflation, but Wall Street is wary that the Fed could go too far and push the economy into a recession. Those concerns have been heightened by a series of reports showing a slowdown in retail sales and other indicators.

Consumers were held up as being resilient in the face of rising prices earlier this year, but that sentiment has faded, said Liz Ann Sonders, chief investment strategist at Charles Schwab. The latest GDP revision shows that consumer spending, which accounts for about two-thirds of economic output, was substantially weaker than the government had calculated earlier, growing at a 1.8% annual pace instead of the 3.1% it estimated in May.

“Not only is recession the base case, but I think it already may have begun,” Sonders said.

Fed Chair Jerome Powell, speaking Wednesday at a European Central Bank forum in Sintra, Portugal, repeated his hope that the Fed can achieve a so-called soft landing: raising interest rates just enough to slow the economy and rein in surging consumer prices without causing a recession and sharply raising the unemployment rate.

But, he said the path to achieving that goal has become more difficult and there’s “no guarantee″ the central bank can tame runaway inflation without hurting the job market.

Lingering supply problems and a sharp jump in demand as the pandemic faded sparked a rise in inflation. It has grown worse through the year as supply chain problems worsened following new lockdowns in China to help control COVID-19 cases. Russia’s invasion of Ukraine in February sent energy prices higher and resulted in record high gasoline prices that have been eating away at consumers’ wallets.

Consumers have shifted spending from discretionary items like electronics to necessities as inflation grows hotter. A weaker-than-expected consumer confidence reading on Tuesday revealed that persistently high inflation was making Americans more pessimistic about both the present and future.

Impacts from the shift in spending is a key focus for investors as companies start to report their latest financial results. Cheerios maker General Mills climbed 6.3% for the biggest gain in the S&P 500 after reporting solid financial results and giving investors an encouraging forecast.

Bed Bath & Beyond plunged 23.6% after reporting a far bigger loss than analysts expected and replacing its CEO.

Cruise lines were among the biggest decliners in the S&P 500. Carnival slid 14.1%, Royal Caribbean dropped 10.3% and Norwegian Cruise Line fell 9.3%.