Swiatek runs away with French Open semi; win streak at 34 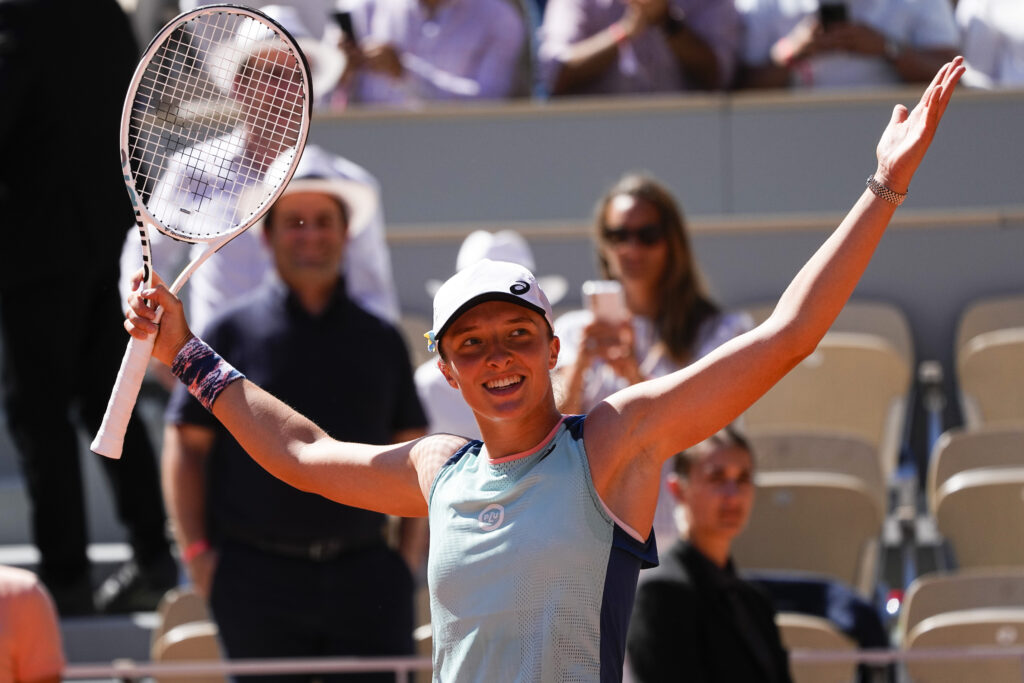 No. 1-ranked Iga Swiatek reached her second French Open final and runs away with extending her winning streak to 34 matches by beating No. 20 Daria Kasatkina 6-2, 6-1 on a breezy afternoon Thursday. In Saturday’s final, Swiatek will face either 18-year-old American Coco Gauff or 28-year-old Italian Martina Trevisan. As reported by the AP:

Swiatek, who turned 21 on Tuesday, is bidding for her second Grand Slam trophy, the other came at Roland Garros in 2020

PARIS (AP) — No. 1-ranked Iga Swiatek reached her second French Open final and extended her winning streak to 34 matches by beating No. 20 Daria Kasatkina 6-2, 6-1 on a sunny, breezy afternoon Thursday.

Their semifinal was even at 2-all after 20 minutes, before Swiatek used her heavy forehand, quick-strike ability, and all-court excellence to seize control with a five-game run. After the 20th-seeded Kasatkina picked up one game, Swiatek took the last five.

She ended the match with 22 winners, more than twice as many as Kasatkina’s 10. And Swiatek was efficient, too, limiting her unforced errors to 13.

In Saturday’s final, Swiatek will face either 18-year-old American Coco Gauff or 28-year-old Italian Martina Trevisan. Their semifinal was scheduled for later Thursday.

Swiatek, who turned 21 on Tuesday, is bidding for her second Grand Slam trophy. The other came at Roland Garros in 2020.

Swiatek has won her past five tournaments, last losing in February, against 2017 French Open champion Jelena Ostapenko. The only Polish player to win a major singles title in tennis is now on a winning streak that equals one Serena Williams had in 2013. The only longer run this century was a 35-match unbeaten stretch by Venus Williams in 2000.

The semifinal Thursday, played with the temperature hovering around 75 degrees Fahrenheit (about 25 Celsius), was the fourth match between Swiatek and Kasatkina in 2022. Swiatek took each of the first three in straight sets while allowing Kasatkina to capture a grand total of just 11 games.

Those earlier three all came on hard courts. After winning her quarterfinal, Kasatkina was asked whether she felt better about challenging Swiatek on clay.

“Well, she’s good on hard court, she’s good on clay, so it doesn’t matter. But I think for me it’s better to face her on clay. I have now (had) a good run-on clay, so I feel good here,” Kasatkina replied. “And let’s see. Let’s see. I’m not a Nostradamus. I cannot see the future, fortunately. I think it’s good if you cannot see it.”

In this instance, probably so.

From 2-all, Kasatkina would go 27 minutes until she won another game. Swiatek ran away with the first set then lead 1-0 in the second, exactly the way she did against 11th-seeded Jessica Pegula a day earlier in the quarterfinals.

Kasatkina, a Russian who will not be allowed to enter Wimbledon because of her country’s invasion of Ukraine, had not dropped a set at the French Open until Thursday.

But Swiatek has now won her past 13 contests against foes in the top 20 in the WTA rankings, conceding merely one set along the way.